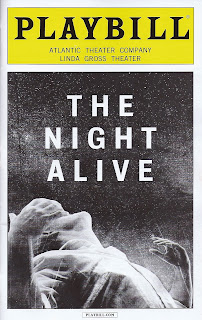 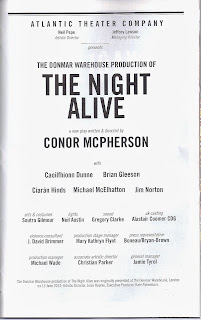 Perhaps you'll see Conor McPherson’s new play, THE NIGHT ALIVE, whose action concludes on Christmas Eve, as a parable of good versus evil, or perhaps you'll view it as story about how love and friendship blossom even in the most dire circumstances, the way a blade of grass can rise through concrete. Or maybe you’ll find in it a message about God’s existence, and the meaning of heaven. Whatever else you take away from this thoroughly absorbing comedy-drama, which premiered at London’s Donmar Warehouse and is now at the Atlantic Theatre on W. 20th Street, I’d be surprised if—even with an ending that harder hearts might dismiss as overly sentimental—you weren’t deeply engrossed for its hour and 45 minutes of impeccable performance from an Irish company (all of whom were in the original production) under the astute direction of the playwright himself. 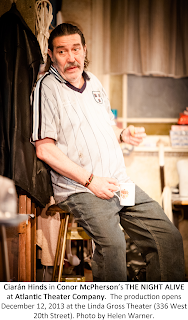 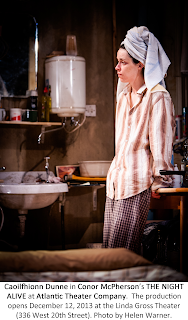 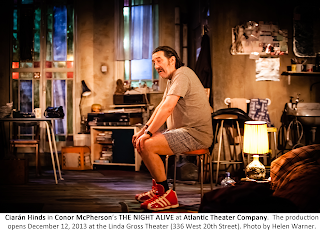 Tommy (Ciarán Hinds) is a greasy, middle-aged, slob of a layabout who makes whatever little money he can doing handyman-like odd jobs, like cleaning out people’s sheds. He lives in a large Edwardian house in Dublin owned by his widowed uncle Maurice (Jim Norton), who lives upstairs, still grieves for the wife he lost when she slipped on the ice three years ago, and keeps a moralistic lid on Tommy’s comings and goings. Tommy’s high-ceilinged room (superbly designed by Soutra Gilmour, who also did the spot-on costumes), with its tall, stained-glass doorway leading into the garden, where Maurice takes pride in growing turnips and potatoes, is a seedy mess. (Entrances and exits are through the onstage door and via the audience left aisle.) Indeed, it's not unlike Tommy himself, with his skanky hair, Fu Manchu mustache, and cruddy clothes. Dishes are piled in the sink and the toilet hasn’t been flushed. Tommy’s partner, pal, and roommate is Doc (Michael McElhatton), seemingly the stupid sidekick, but ultimately the poetic voice that lifts the play to another plane. Into this cluttered lair of lonely males comes Aimee (Caoilfhionn Dunne), a young hooker with a bloody nose, known for charging £40 for a hand-job. Tommy has rescued her from a vicious lover and, since she has nowhere else to go, he gives her a place to sleep for the night. Her presence in this all-male enclave is the generating force behind what happens in THE NIGHT ALIVE. 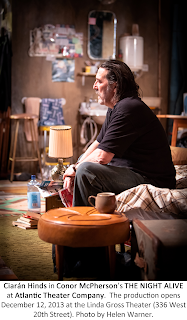 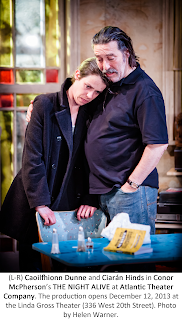 Tommy and Aimee’s relationship moves forward in uneven steps; in return for his help, she offers him a sexual favor (he apologizes for the repetitive strain syndrome in his wrist that prevents him from doing the job himself). He’s separated from his wife and kids, we learn, while she’s connected to someone who’s a potential menace; she has a kid as well. Maurice, acting as the play’s occasional voice of reason, reminds Tommy that, regardless of whatever he has in mind, and separated or not, he’s still a married man (this is Ireland, of course). The aforesaid menace, in the form of Kenneth (Brian Gleeson), Aimee's boyfriend, ultimately arrives and the play lurches forward into unexpected but horrific violence. To say more would invite spoilers, but the way the play provides resolutions to its characters' problems, for all its potential sappiness, is perfectly satisfying.


The leading characters are thoroughly appealing, despite their seamy lives. Tommy, living in squalor and generally depressed, can be a cheapskate when dealing with the desperate Doc, who works for him, but as his life evolves his generosity emerges. Aimee is a lost soul who finds salvation in Tommy’s unlikely person, although she doesn’t at first know it. The scene where he invites her into his room and then rushes around cleaning up the place (and flushing the toilet) is hilarious. Living a hardscrabble life that even has him eating dog biscuits has not hardened him to the niceties of gentlemanly behavior in a pretty woman's presence. There’s also a special scene where the volume is turned up on Marvin Gaye’s “What’s Goin’ On,” and Doc and Tommy start to dance in sync, with Aimee joining in. Doc has some sterling comic moments, such as when he explains why he’s called Doc, instead of his real name, Brian; “cause people don’t have all day to be sayin’ your name,” he declares, ignoring the idea that “Bri” would do the job equally as well. Few actors can play an Irish drunk as well as Jim Norton, with his resonant baritone, and McPherson provides him with a great opportunity to show what Maurice is like with a few pints under his belt. 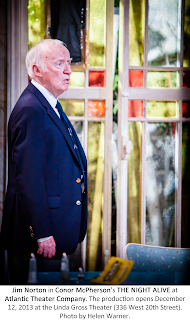 Ciarán Hinds, who can sometimes seem stuffy, is an absolute delight in his role, capturing Tommy’s neediness, desperation, and deep-seated goodness in a richly rewarding portrayal that alone is worth the price of admission. Add to this Mr. McElhatton’s charmingly hapless yet decent (and sexually impotent) Doc, whose surprising (and, I have to admit, out of character) interest in subjects like time travel and black holes opens the play to metaphysical speculation; Ms. Dunne’s sweet but cautious and vulnerable Aimee, the least fully expressive character in the play; Mr. Norton’s imperious, but ingratiatingly rational Maurice, preoccupied with thoughts of death; and Brian Gleeson’s scarily chatty Kenneth, who uses monster teeth to frighten the bejesus out of Doc, and you have what's probably the most consistently magnetic ensemble on the current New York stage. If you’re going to do a play whose dialogue epitomizes the kind of Irish wit and lyricism you’d hope to hear in a Dublin pub but would more likely encounter in a play by Synge or O’Casey, you need a company of artists such as this.


Playwrights are not necessarily the best directors of their plays, but Mr. McPherson is one of the exceptions to that belief. His actors are excellently balanced vocally, their timing is precise, the blocking is always clean and honest, and the characterizations consistent. The excellently staged violent moments were created in London by Paul Burke, who, for some reason is not credited, while one of New York's top go-to guys for staging fight scenes, J. David Brimmer, credited as the "violence consultant," oversaw these bits for the New York production.

The controversial final scene, warmly lit (by Neil Austin) as Tommy, all alone after Aimee has left him, spiffs himself up for a family gathering, is played around a string of Christmas lights that Doc has unwound, turned on, and left spread across the floor. As we listen to Father John Misty’s “Look Out Hollywood, Here I Come” in the background, someone enters while Tommy's in the bathroom. I won't reveal what transpires in the next few moments, but skeptics will be skeptical about it, and sentimentalists will be sentimental. But some skeptics, may also be sentimental. As for me, when I left the theatre minutes later the night, like the play, was alive.