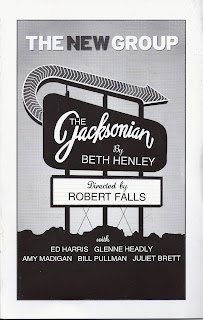 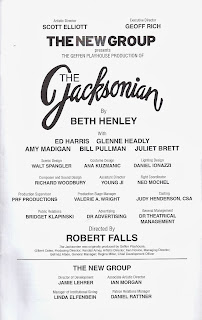 Beth Henley’s THE JACKSONIAN opened over a month ago at the Acorn Theatre but I finally caught up to it this weekend. The reviews have been all over the map on this one, ranging from A+ to F, but my response is somewhere in the C vicinity.  Those who approve of the play praise Ms. Henley for moving away from her comfort zone as a depicter of comically eccentric Southern characters to the sphere of blood-inflected Southern Gothic melodrama, overlaid with a patina of black humor. I, though, find little humor here at all, black or otherwise, and while very little of THE JACKSONIAN gave me chills, despite all the ice thrown around, I can’t say my reaction wasn’t chilly. 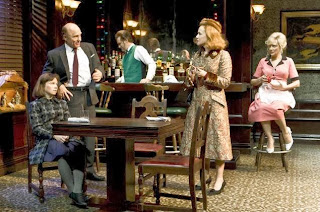 
Four of the five actors involved are major players on stage and screen—Ed Harris, Amy Madigan (married to Mr. Harris), Bill Pullman, and Glenne Headly—and it’s hard to resist concluding that the chief pleasures to be gained from THE JACKSONIAN lie in watching their colorful performances. Ms. Henley has provided them with a drama set in Jackson, Mississippi, from May to December 1964, when the newspapers were filled with stories of bombings and burnings of black churches. Over the course of 85 intermissionless minutes the play touches on racial prejudice, marital abuse, medical malpractice, mental illness, family dysfunction, sexual perversion, murder, deception, illegal drugs, perjury, adultery, and other friendly subjects, giving the actors plenty of juicy meat into which to sink their teeth.


Teeth, in fact, are another feature of the play, since Mr. Harris plays a dentist named Bill Perch, who loses his license to practice. Bill is living at the Jacksonian Motel, on the city’s outskirts; he’s there because of discord with his wife, Susan (Ms. Madigan), who’s threatening to file divorce papers. Although he insists he’s there only temporarily because he thinks he can quickly resolve his conjugal problems, his motel room, seen at stage left, becomes his permanent abode. He’s often visited there by his poorly adjusted, acne-plagued teenage daughter, Rosy (Juliet Brett), who serves as a sort of pseudo-poetic narrator, occasionally speaking directly to the audience. Rosy uses the motel’s restaurant/bar, occupying stage right, as her hangout, where she does her homework, and where she’s befriended by Fred Weber (Mr. Pullman), the bartender, whose weirdness is emphasized by his constrained speaking style, his hesitant movements, and his huge, Elvis-like pompadour. Fred takes a creepy interest in the unprepossessing Rosy (her father tells her: “Someday you’ll be out of the ugly duckling phase”), but he himself is the object of affection of Eva White (Ms. Headly), the blonde maid, who is both a ditzy floozy and a pious Jesus worshiper. One of the play’s most memorable lines is hers: “Every Sunday I get His forgiveness. Regular, like a bowel movement.” 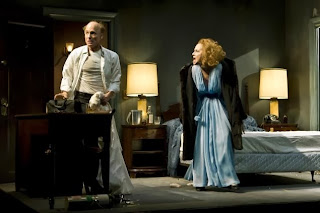 
A female cashier at a nearby gas station has been killed by Fred during a robbery, and Eva—because Fred has promised to marry her (a lie)—is perjuring herself during the trial to protect Fred and convict instead an old black man who works at the station. Eva, you see, is a racist, one who finds it difficult to say “Negro” in place of “nigger,” when Bill, the dentist, insists on it. The liberal Bill, for his part, is in professional trouble for pulling out all the teeth of a patient who was involved in the burning of a church and who planned the same for a synagogue. Bill, who even seems to get sexually excited by a mouthful of choppers, is on the outs with Susan because she blames him for agreeing, while under anesthesia having an ovarian cyst removed, to have her given a hysterectomy. Before the evening is over, Bill will get sky high on nitrous oxide and chloroform, Susan will get socked in the face, Fred will attempt to swallow a table knife, and someone else will die, among other moments of theatrical malfeasance.


Despite all the twists and turns, Robert Fall’s direction during the first half moves at a plodding pace, failing to ignite. Only when Bill--who seems a serious guy hoping against hope that his mentally unstable wife will take him back so his family can be reunited--suddenly turns into a drug freak in an over-the-top bedroom romp with the underwear-clad Eva, does the production come to life, but it’s tough to swallow the change in his demeanor or the shift in tone to Joe Orton-like farce.


THE JACKSONIAN is simply one of those plays where you have to accept strange behavior from the characters and hope the actors will be deft enough to make you believe in what they’re doing. That, fortunately, is the case in this production, originally staged at L.A.’s Geffen Playhouse with the same cast, apart from the actress playing Rosy. Mr. Harris makes Bill believable, even when he’s acting like a lunatic; Ms. Madigan, wearing a flaming red wig, is suitably neurotic; Ms. Headly, quite fit and attractive at 58, is appropriately kooky; Mr. Pullman brings a bizarreness to his role that is far from what he usually projects; and Ms. Brett is convincingly quirky and vulnerable, if ultimately vague, as a 16-year-old.


The dark set, combining bar/restaurant and bedroom spaces to convey the motel interior is suitably seedy, especially under Daniel Ionazzi’s subdued lighting. Richard Woodbury’s music provides the required tone of things not quite being as they should, and, for the most part, Ana Kuzmanic’s costumes all look right for the period (especially Eva's underwear, girdle included). However, the seamed stockings worn by the women seem to be an anachronism, as my wife points out that by 1964 seamless stockings were in and seamed ones were out; an Internet check bears this out.


There’s no question that parts of THE JACKSONIAN are absorbing, and, although they’re scattered, there are a few genuine laughs, but it’s hard to become fully engaged with these people, or to care about them one way or the other. Ms. Henley succeeds in depicting a world of moral depravity but it’s so farfetched its impact doesn’t last. It has A qualities, B qualities, C qualities, and D qualities, but C seems the most comfortable fit.
Posted by Samuel L. Leiter at 11:05 AM