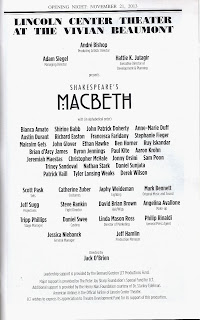 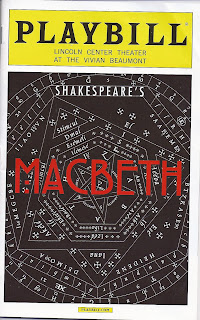 Is this another MACBETH which I see before me? Damn right it is, and the march of the MACBETHS will continue in the spring, when Kenneth Branagh brings his version of the Scottish play across the pond. Much as this bleak tragedy of cutthroat ambition has occupied too much of local stage space recently (last year alone saw a one-man version Off Broadway starring Tom Gaultieri and a nearly one-man staging on Broadway with Alan Cumming), I’d be willing to see one more if only it was good enough to recoup my interest after watching Jack O’Brien’s dire, dark, and deadly production at the Vivian Beaumont, starring a sorrowfully miscast Ethan Hawke as the bloody king. 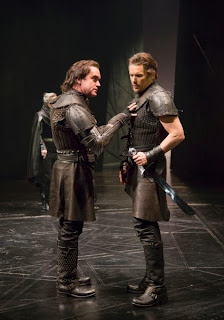 Apart from occasional moments, such as the scene of Donalbain and Malcolm in England, where their cream-colored garments are set against an autumnal hanging, Mr. O’Brien offers a black and gray vision of the play. There also is some white, and now and then flashes of red, in Scott Pask's monumental environment, which takes too much advantage of the Beaumont’s huge stage.  A semicircular thrust with soaring black walls whose configurations alter as the action moves is combined with mobile staircases and a catwalk, and with tables that rise from and sink into the black floor itself. That floor itself is based on a mystical mandala created in 1582 by Dr. John Dee, a mathematician and astronomer thought to be the inspiration for Prospero in THE TEMPEST.


Japhy Weideman’s lighting targets the actors with impressive crisscrossing beams from high above, and gloom and doom fill the air as Mark Bennett’s eerie music underscores the gory proceedings. When the Witches conjure up images they do so via odd moving projections slung across the black sky. Catherine Zuber’s costumes mingle periods to allow black Victorian overcoats to share the stage with leather and metallic armor; only the props, such as a vase of roses, inject a dash of color into the proceedings. That doesn't include the black tablets carried by the military officers; if they were a few inches smaller you’d think they were Ipads.


Despite the obvious expense of this elaborately designed production, its minimalist tonal scheme gradually grows visually boring, especially because the performances themselves get swallowed up in the vast expanses, forcing the actors to shout and yell too often, and permitting little of subtlety or nuance to intrude.


Central to Mr. O’Brien’s vision are the Witches—all three played by high-cheekboned men with grayish faces, their sleepless eyes outlined in red—to serve both in their usual function, as prophesiers of the future, and as minor characters, such as the Bloody Sergeant (Byron Jennings) and the Porter (John Glover), both of which have campy overtones. If the purpose is to show how the Witches actually serve to bring about Macbeth’s downfall by subversive participation in his life, the idea fails as none of the characters they play, no matter how showy their histrionics, is responsible for what happens to Macbeth, and the idea seems purely a director’s gimmick designed to offer something different, or perhaps to give three established actors (another Witch is played by Malcolm Gets) a chance at more stage time in which to overact. And why does Mr. Glover’s costume include a black slip with hanging breasts worn over his pants and boots? The queen of the witches, Hecate (Francesca Faridany), often cut from the play, is portrayed as a sensuous woman with an eccentric blonde wig; she could practically stand in for Titania in A MIDSUMMER NIGHT’S DREAM. This isn’t an especially novel concept, other MACBETHs also having chosen to doll her up, as opposed to seeing her as yet another, if more spectacular, hag. Macbeth even fondles her, suggesting the sexual thrill he gets from her assistance. 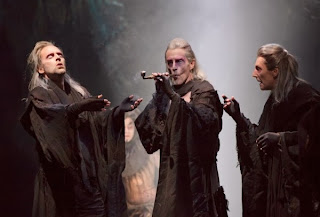 
Ethan Hawke. Photo: T. Charles Erickson.
Despite the presence of notable actors, like Richard Easton as Duncan, Daniel Sunjata as Macduff, and Brian d’Arcy James as Banquo, all contribute to the general tedium of this two-hour and 45 minute dronefest. The opportunities for spookiness are theatrically familiar; having seen MACBETH only two days after Julie Taymor’s A MIDSUMMER NIGHT’S DREAM made me think of all the crawling, slithery, part-animal part-human creatures in Hecate’s world as rejects from the Bard in Brooklyn. Banquo’s death scene, played mainly in the dark with only the screams of the victim to convey what’s happening, is meant to be tragic but comes off as almost comic. (However, the scene that immediately follows—when the banquet table bursts into view, laden with colored foodstuffs—is made more vivid by the contrast.) Nothing interesting has been done with the banquet scene either. The ghost of Banquo appears in upshafts of bright, white light, and then he vanishes into the deep shadows, only to reappear in another brilliant light. All I could wonder was why, if such good electrical services were available in this dim and dreary world, someone simply didn’t turn the lights on.


While Anne-Marie Duff’s expressive Lady Macbeth might have survived a different staging, it too sinks inexorably into the murky mud. Ms. Duff’s interpretation is in the vein of Lady Macbeths who use their sex appeal to influence their husband’s wavering will; conversation seems mainly  a prelude to getting laid. She wears a black (what did you expect?) gown that exposes her back, shoulders, and upper chest. Ms. Duff, who bears a bony resemblance to Reese Witherspoon, is very slender, and the sharp overhead angles of the lighting accentuate her skeletal structure in a way I hope wasn't intended.


I save the worst for last, this being the misfire of Mr. Hawke’s Macbeth. Physically, he lacks the presence this heroic villain should convey; while of the appropriate age, he retains a boyish quality making him unable to convey the proper sense of power and gravitas. His movement borders on clumsy and his voice is inadequate. Perhaps it’s the result of overextending it during the run, as this is, after all, a greatly demanding role, but on Sunday he was raspy and monotonous, failing to capture any of his lines’ poetic beauty, much less their meaning. Moreover, his line readings are superficial, and speech after speech misses the subtext that great Shakespeareans, like Mark Rylance, are able to mine. Nothing new is learned from his performance, no lines or speeches reveal unexpected meanings or illuminate old ones, which only demonstrates how much training is necessary if you are going to tackle a major role like Macbeth in one of New York’s most prominent venues.


To make a memorable MACBETH you need to place the right ingredients in the caldron as you say “Double double toil and trouble, caldron burn and fire bubble.”  Many people die in the play, but it itself is far from dead, although a poor production can make it seem so. To make it live on stage requires great acting, direction, and design working in tandem. There are very active witches in this MACBETH; what’s missing is the witchcraft.