188. WHAT’S IT ALL ABOUT? BACHARACH REIMAGINED 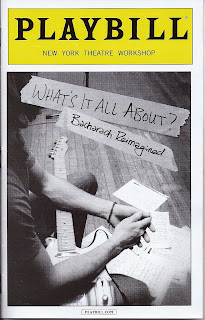 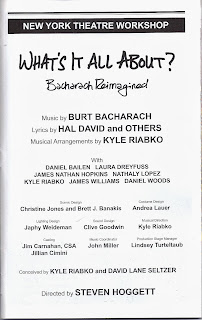 For the last half hour of WHAT’S IT ALL ABOUT, I waited impatiently for it to end, not so much because I wasn’t enjoying it but because the auditorium of the New York Theatre Workshop was getting increasingly cold. Perhaps it was mainly where I was seated, toward the rear of the house, but I noticed several women nearby gradually donning their coats, hats, and scarves. My wife, Marcia, eventually disappeared into her winter outerwear, so that the seat next to me was occupied by a big blob of black woolens; it turned out that her discomfort was caused not merely by the cold, but by the show itself, a concert/revue of 30 of Burt Bacharach’s popular songs as reinterpreted by a young singer/musician from Saskatchewan named Kyle Riabko, supported by a half dozen other performers. 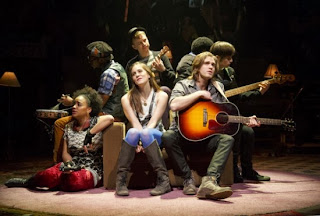 
As we trudged to the subway afterward, the cold night air feeling warmer than the Arctic temps inside the theatre, Marcia laid into WHAT’S IT ALL ABOUT? as an insult to Mr. Bacharach, finding fault with the arrangements, the singers, and the often lethargic tempos. She complained that she was so bored at times she wanted to stick a pin into the company to wake them up. I was not nearly as disappointed, but it was easy to see where she was coming from. Most people of our generation are familiar with the Bacharach catalogue, too much of which became ubiquitous elevator music. But we do have a close emotional connection to it, especially when sung by artists like Dionne Warwick, so tampering with such standards can be risky.


Songs like “What’s It All About, Alfie?” “This Guy’s in Love,” “I Need Your Love,” “Raindrops Are Falling on My Head,” “The Look of Love,” “Say a Little Prayer for Me,” “Close to You,” “What the World Needs Now,” "Do You Know the Way to San Jose," “Message to Michael,” “Walk on By,” “A House Is Not a Home,” “I Need Your Love,” and “That’s What Friends Are For” are like the air we breathed in the 60s and 70s; with lyrics by Hal David and others, they confirmed the need for love, despite its hardships, and reminded us of the pain of breaking up, but with enough lightness to sooth our feelings and restore our sanity. Mr. Riabko plays a dangerous game when he takes the upbeat songs and makes them downbeat, and does the opposite with the downbeat tunes; whether you like what Mr. Riabko and his personable troupe have done to Mr. Bacharach’s songs will definitely be a matter of taste.

Several numbers work very well, especially when the company creates lovely harmonies, but I also think, like Marcia, that too many songs are so low-key as to become dirgelike. Mr. Riabko, a slim, nice-looking, long-haired young man in his late 20s, looks much like many pop rock singers, and sings with a fine, soft tenor, often moving into a falsetto to hit the high notes; he transitions easily from tender ballads to heavy rock, pounding his various guitars with youthful, leaping energy. The rest of the racially mixed company includes Laura Dreyfuss and Nathaly Lopez as the female vocalists, with the male vocalists made up of Daniel Bailen on bass; James Nathan Hopkins on keyboards; James Williams on percussion; and Daniel Woods on guitar. Several play more than one instrument. Mr. Riabko is also credited with the arrangements, the musical direction, and the co-conception of the show (with David Lane Seltzer).  While everyone is highly professional, there isn’t a single knockout performer that steals the show, regardless of all other considerations.


Director Steven Hoggett, known for his musical staging skills, moves the actors about prettily, and takes full advantage of the eccentric scenic arrangement provided by Christine Jones and Brett J. Banakis, which covers all the walls of the auditorium and stage with hanging guitars, rugs, foam, and lamps as though it were an improvised sound studio. Couches are placed on the sides of the stage for a small number of spectators and two couches are attached some feet up on the stage’s rear brick wall for the performers. The stage is arranged with standing lamps and mics, and there are two revolves, one inside the other, such as the Japanese theatre used to have in the 19th century. A few numbers have the musicians circling slowly with an assortment of chairs as they sing. One of the more memorable touches is when Mr. Riabko sings "Making Love" while embracing Lauren Dreyfuss with his guitar held behind her back.


Aside from a few introductory words by Mr. Riabko about how he got Mr. Bacharach’s approval for his project, there’s no dialogue. The music has been arranged so that snippets of music from various songs are combined with longer versions from others to create thematic medleys, the chief tune running like a light motif being “What’s It All About, Alfie?” Too many lyrics, however, are replaced by "da da da" and "la la la" interpolations. Excellent rock concert type lighting by Japhy Weideman makes good use of the multiple standing and table lamps placed all around the space.


I thought I'd be more impressed; this isn't the kind of show one expects to be bored at, so even momentary lapses come as a surprise. WHAT’S IT ALL ABOUT? has its virtues, but it seems likely to divide audiences on just how far one can take Mr. Bacharach’s music before the very qualities it’s known for become so thoroughly appropriated by its interpreters that it becomes more theirs than his. The show also has a certain hip, self-conscious coolness that may alienate some fans. There’s no question it could use more heat, but, then again, so could the New York Theatre Workshop.
Posted by Samuel L. Leiter at 8:18 AM