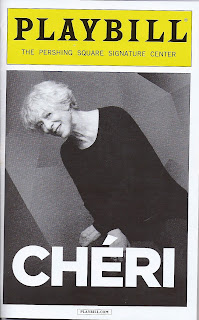 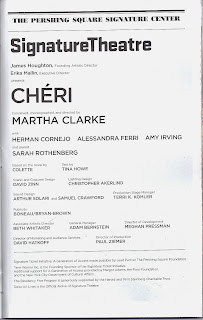 If the souvenir shop at the Signature Theatre were selling a DVD of CHÉRI, the mostly ballet-oriented theatre production conceived, choreographed, and directed there by Martha Clarke, I’d buy it just to play before going to sleep. I can think of no better soporific to lull a restless brain into slumberland than this relentlessly boring, dull, undramatic, arty, resolutely humorless, and unimaginative presentation inspired by Chéri (1920) and Fin de Chéri (1926), two novels by popular French writer Colette, about the doomed relationship of  24-year year old Chéri (Herman Cornejo) and the 49-year-old Lea (Alessandra Ferri), best friend of Chéri’s mother, Charlotte (Amy Irving). 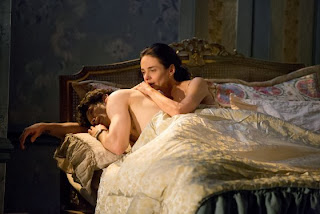 Herman Cornejo and Alessandra Ferri. Photo: Joan Marcus.
Set in 1910 post-Bell Epoque Paris in an expansive, pale blue bedroom—with large double doors up center, a pair of mirrors, and two sets of French doors at stage right, on a hardwood floor that rises slightly from right to left—the piece is almost entirely danced by the two lovers in repetitive and unoriginal pas de seul and pas de deux sequences performed mainly with Chéri and Lea in sleepwear. There are four brief intervals in which Charlotte—dressed in the same pretty period gown throughout, but with a hat on for the fourth—narrates the background to the lovers’ sad story (I refuse to call such romantic nonsense tragic); throughout, gifted concert pianist Sarah Rothenberg, also in period clothing, sits at a grand piano playing a monotonous litany of selections from Maurice Ravel, Claude Debussy, Federico Mompou, Francis Poulenc, Richard Wagner, and Morton Feldman; the piece is as much a concert as it is a ballet, but, despite a text by Tina Howe, it can only technically be called drama.

Even at a little more than an hour the piece feels endless; whatever drama there is in the story is thin enough without being further deprived of protein by setting it entirely to music with only brief narrative snippets to explain its progress. This, despite Colette’s own advice to writers, “No narration, for heaven’s sake!” quoted in the program. Chéri, a beautiful young man, is having a hot affair with Lea, a woman old enough to be his mother, but is induced by Charlotte to marry a more age-appropriate and wealthy woman. When the heartbroken Lea writes to Charlotte that she is now happy with a new man, an obvious ruse intended to hurt the young man, he returns, sleeps with her, and then coldly turns his back on her. We then learn from Charlotte that he went off to war, where his best friend was killed, dying on top of him. Still haunted by his love for Lea, he returns to the bedroom where they had their trysts years before. Charlotte tells us that Lea is now gray and stout, but Chéri, who apparently never looks for himself, can remember only the middle-aged beauty of the past. Distraught and alone, he puts a pistol in his mouth and blows his head off.
Put like this, the situation perhaps sounds much more fraught with dramatic tension than it is in the performance. Mr. Cornejo, of the American Ballet Theatre, and Ms. Ferri, who retired as prima ballerina assoluta six years ago and remains amazingly slim and agile at 50, are both exquisite dancers, but there is nothing they can do to overcome the ennui exuded by the dreary story, Ms. Clarke’s charmless staging, Christopher Akerlind’s meager lighting, and David Zinn’s bland set. The attractive and talented Ms. Irving is completely wasted, her delivery no more than ordinary. One wonders what she’s doing here.
CHÉRI might at least have been a series of arousing erotic encounters blended with romantic angst. Instead, it generates about as much heat as any recent New York day.