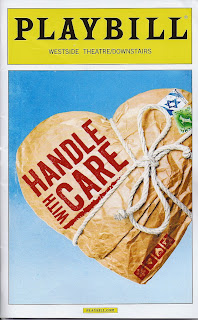 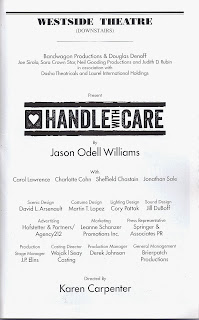 When the final curtain call ended at Tuesday night's performance of HANDLE WITH CARE, Jason Odell Williams’s new romantic comedy at the Westside Theatre Downstairs, someone involved with the show came running down the aisle; it was not, as I expected, to make a plea for Broadway Cares, which is raising money in local theatres this week, but to announce happily that the New York Times had just published a rave for the show and to ask the relatively sparse audience to go out and spread the word. My ears popped and I had to ask my wife if I’d heard correctly. The first thing I thought was, if the Times actually did rave about the show, then I’ll bet the reviewer was . . . When I got home and checked, not only did I find a rave, I also confirmed my guess as to who wrote it. I wish I felt the same.


Whatever I or anyone else thinks about HANDLE WITH CARE, the big draw is bound to be the presence of the still beautiful and sprightly 81-year-old Carol Lawrence, the original Maria in WEST SIDE STORY, which opened 56 years ago. Ms. Lawrence, who doesn’t get to sing here, deploys her acting chops on behalf of a shallowly written character in an equally shallow play that lacks credibility from its opening scene to its big twist reveal at the end.

Set on Christmas Eve, 2008, in yet another motel room (well designed by David L. Arsenault) in Goodview, Virginia, the play begins with a scene of heavy-handed acting between Terrence (Sheffield Chastain), a doofus deliveryman for a company called DHX, complete with a hokey Southern accent, and a pretty young woman, Ayelet (Charlotte Cohn); she’s an Israeli who (unlikely as it may seem) speaks barely any English. Her grandma Edna’s casket, with bubbe in it, has gone missing while being shipped back to Israel because Terrence’s truck has been stolen. So Terrence summons his half-Jewish friend, Josh (Jonathan Sale), thinking that, as a Jew, he can surely speak “Jewish,” but when Josh, a college teacher, arrives, he says the only Hebrew he knows is the little he learned while practicing for his bar mitzvah (or as the ignorant Terrence ridiculously calls it, his Hare Krishna). This is the set up for the love story that blossoms between Josh, a recent widower, and Ayelet as they struggle to communicate, with her using Hebrew, and a scattering of phrasebook English, and him speaking English, sprinkled with some vaguely remembered Hebrew words. Of course, there are bound to be comical linguistic mishaps, most groaningly when Ayelet mashes her syntax and says to Josh, “Eat me.”


Ms. Lawrence, as Edna, appears in flashbacks when the calendar is set back a day, and we discover that she brought her granddaughter to America to snap her out of a depression, but never told her until now that the real reason she’s been schlepping her from Virginia motel to motel was to find a man she met in Israel in 1948 when they were teenage lovers. They didn’t marry because of parental objections to his not being Jewish, and he went home to the States. I’ve already given away more than I should but suffice it to say that when things don’t work out as she intended, Edna passes on; thereupon we proceed to the megillah with the lost bubbe and her casket.


The play has lots of familiar ethnic humor, the kind that New York audiences typically relish (especially those who visit the Westside Theatre, recent home of OLD JEWS TELLING JOKES and of the current BECOMING DR. RUTH). Edna’s being a fan of “Wheel of Fortune” will also register with the geriatric crowd’s funny bone, as will the de rigueur wisecrack aimed at New Jersey. There’s a sweet scene when Josh and Ayelet share a rather primitive Shabbat dinner, but most of what transpires is implausible and ham-fisted.
Ms. Cohn, the (non-Jewish) playwright’s wife, was raised in Jerusalem, so she’s able to deliver what seems more than half her lines in fluent Hebrew, but her scenes with Edna are all in English, accented only for the English words. Despite the excuses offered in the dialogue, it’s rather unlikely that an educated Israeli woman would know so little English; however, since that’s the premise, we have to accept it in order to watch extended scenes in which Josh either makes foolish attempts at sign language or speaks to Ayelet in complex sentences all the while realizing she doesn’t know what the hell he’s saying. Toward the end, Ayelet manages to get her thoughts across when the little English she’s learned comes out in bits and pieces, something she only now is able to do, probably because the playwright can’t keep us waiting forever for his denouement. Within a matter of hours, love demolishes all language barriers.


Mr. Sale’s Josh is an intelligent guy with a pleasant charm (despite his constantly doing the “did I just say that stupid thing?” eye-rolling shtick, an actor’s tic of which Ms. Cohn is only slightly less guilty), but you have to be very gullible to believe he’d be a good friend of the IQ- and maturity-challenged Terrence. This is only one of the many things you must swallow to accept these characters as real. Did I mention that Ayelet’s beloved grandma died shortly before the play begins? Well someone should remind Ayelet, whose grief seems to have been lost with Edna’s casket. Then there’s a scene in act two when Edna bursts into the room insisting that she and Ayelet must leave immediately, even though she’s just brought in food for Ayelet to eat. Edna rushes around grabbing her stuff almost like the place is on fire, but when Ayelet finally gets her to calm down and explain the problem, Edna delivers a schmaltzy speech about why she dragged her granddaughter to America;  quicker than it takes a snowflake to melt her urgency is gone. Why, one must ask, did this revelation about her former lover have to wait until this moment? What would have been wrong with simply taking Ayelet to the U.S.A. on a sightseeing trip and looking for the guy as part of their adventure? Probably to give the actress playing Edna something worth the effort to appear in this mishegas. Don’t they teach in playwriting 101 that secrets for the sake of secrets are not as theatrically viable as secrets that are too sensitive to be revealed until absolutely necessary?


HANDLE WITH CARE is also one of those plays where you have to have someone leave the room for long periods of time so others can talk. Thank God for bathrooms, as witness what happens in ONE NIGHT . . . and even the excellent THE NIGHT ALIVE. As used here, the device is distractingly noticeable and unconvincing. Unless, of course, the Ex-Lax just kicked in.


Karen Carpenter’s fast paced direction is not able to overcome the play’s speciousness, and the action veers incredulously from broad farce to sentimental romance in the flick of an eyelash. She also allows Mr. Sale and Ms. Cohn to get away with too much face pulling, despite the problem the characters face of trying to communicate beyond words. And something needs to be done to reign in Mr. Chastain's vocal and physical excesses, which are signs that neither the director nor the actor trusts the honesty of the material.


Most egregious is the amateurish way the director handles the brief intervals between scenes, when a woman in jeans enters to move props around. Since the lights are only slightly dimmed, it seems at first as if this is the motel maid coming in to straighten up the room, and, to accommodate the flashbacks, change the calendar date from December 24 to 23. But soon it becomes clear that these distracting moments are simply technical adjustments being made by a stage hand. Sorry, but this kind of thing in a professional production is inexcusable. (I promise not to mention the phony snow still flaking off Josh's jacket minutes after he's entered the room.)


The central theme of HANDLE WITH CARE seems to be the fortuitousness of fate, destiny, or what in Yiddish is called bershert. Although the word isn’t actually used—Ayelet and Edna speak Hebrew, not Yiddish—Terrence of all people tips us off when he talks of how, because of his liking the uniform of DHX deliverymen, he got a job that led to his having lost Edna’s casket, thereby bringing Josh and Ayelet together. Josh, for his part, prefers to accept life’s happenings as sheer chaos, without reason or plan. If, despite its flaws, HANDLE WITH CARE becomes a hit and brings audiences to the Westside, let's say it’s bershert and leave it at that. If not, that too can be called bershert; sooner than citing chaos, though, I’d blame the play.
Posted by Samuel L. Leiter at 7:04 PM