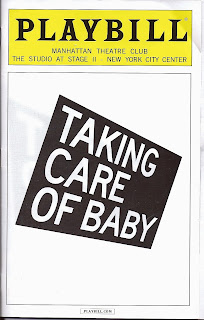 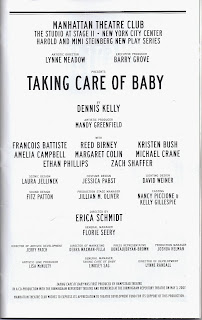 TAKING CARE OF BABY, by Dennis Kelly, whose book for the musical MATILDA won the Tony last season, penned this play for a 2007 production done at England’s Birmingham Repertory Theatre in cooperation with the Hampstead Theatre. The play’s English references have been Americanized for the New York premiere, now playing at the Manhattan Theatre Club’s Studio at Stage II in the City Center; thus, for example, the character of Lynn Barrie (an excellent Margaret Colin), a Labour party candidate running for parliament has been transmogrified into a Delaware Democrat running for Congress. All this works smoothly and even its story about an emotionally fragile young mother who goes to jail for murdering her two children seems pretty much like one we’ve heard of in the United States, even if we can’t quite recall the exact circumstances. 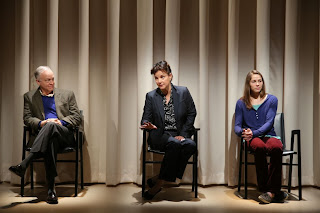 MATILDA is based on parental abuse of a gifted child, but we never see the kids in TAKING CARE OF BABY, nor do we ever really learn whether the mother, Donna McAuliffe (a terrific Kristen Bush), actually killed them or if the first actually died of SIDS and the other, two years later, by being strangled by her sheets. Donna could herself be seen as an abused child since, after Lynn' efforts on Donna's behalf are successful, she exploits Donna’s experience to win her election.


Exploitation of others’ tragedy for personal gain is a significant theme in this interesting, mostly well-written play, as is the search for truth, that ever-changing, elusive entity, wherein perception often trumps reality in how people relate to things. To explore these tricky subjects Mr. Kelly has crafted his play in the form of a pseudo-docudrama, introducing it when the lights go down by having the disembodied voice of an Interviewer (Zach Shaffer) tell us that “The following has been taken word for word from interviews and correspondence,” and that “Nothing has been added and everything is in the subjects’ own words, though some editing has taken place. Names have not been changed.” Much as this may seem to be a writer’s straightforward explanation of the honesty he’s attempted to provide in presenting his material, it’s all a lie, since the story is itself a fiction, the names are not real, and no such interviews and correspondence exist. The story is enough like ones we’re familiar with to have the touch of genuineness, and a fuzzy line separates truth and fiction.


All the leading characters walk this line as evinced via the technique of having most of the play cast in the form of a series of interviews conducted by an unseen, dispassionate interviewer who is recording the feelings of people to Donna’s questionable culpability in her children's deaths. To some degree we’re reminded of TV shows like “Modern Family” and “The Office,” where the characters seem always to be relating to a camera. Lynn’s political ambitions are one thread, allowing us to see how she manipulates truth for her own advancement. Another is the behavior of the Reporter (Michael Crane), who admits not only to having made money (and spent it) from his tabloid journalism about the story, but also to being a sex addict. By this time, of course, we’ve figured out that everything we’re watching is a fiction, but the reporter's sleaziness does add a fillip of amusing tastelessness to the proceedings, and allows us to appreciate the sly infusion of satire that’s been streaming beneath the provocative drama on the surface. Another example is the scene where a Republican politician tries to enlist Lynn to switch sides, giving left-leaning spectators a chance for some easy laughs at the GOP’s expense.


Chief among the other threads is that concerning Dr. Millard (Reed Birney), the psychiatrist whose reputation is based on his having identified the Leeman-Keeley Syndrome, which purportedly explains the psychological processes that make loving mothers inflict terrible harm on their offspring. The scene in which Dr. Millard is interviewed and squirms this way and that as he tries to justify his theories is a highlight: “Working with mothers who have tortured their children has restored my faith in humanity,” he claims. Talking of the book he wrote on LKS, he regrets the publisher’s opposition to the illness’s being called the Medea Syndrome, which he thinks might have sold more books. As he grows increasingly frustrated and angry at his wife’s interruptions and the interviewer’s insinuations, Mr. Birney grabs the opportunity to demonstrate why he’s widely considered one of the treasures of the New York stage.


The entire cast offers superlative performances, including Francois Battiste as Donna’s conflicted husband, who grows more and more agitated about his participation in what he takes to be the interviewer’s creation of an “entertainment” built on the suffering of those closest to the tragedy. The playwright himself played the voice of the interviewer in the English production, thereby offering additional layers of irony to the play’s investigation of truth, deception, and exploitation.


Laura Jellinek’s pale beige set is an essentially anonymous environment that, with the use of upstage curtains or blinds and several highly selective pieces of furniture can portray a multitude of locales, while Jessica Pabst’s costumes convey the essence of each character, and David Weiner’s lighting effectively enhances the appearance of each scene.


The play, which runs two hours and 20 minutes, with an intermission, hits a rough spot or two; there are times when the interviewing conceit becomes too vague or too intrusive; also, because of the subplots, it takes some time for us to feel the urgency of the storytelling. When act one ended I understood what the set up was but wasn’t sure about why I should care about act two. No major question seemed poised to be answered, and the tension and suspense was slim. Act two does, of course, fill in the picture more or less satisfyingly, much of that owing as much to the performances, under Erica Schmidt’s sharp direction, as to the writing.


TAKING CARE OF BABY has a lot going for it, including its rapid-fire, musically orchestrated dialogue, much of it with stops, starts, stammers, and repetitions as certain speakers (notably Donna) struggle to express themselves. Humor sits comfortably side by side with emotional outbursts, while realism and satire equally coexist. With THE COMMONS OF PENSACOLA being performed across the lobby from TAKING CARE OF BABY, the Manhattan Theatre Club’s two downstairs theatres are definitely taking care of business.
Posted by Samuel L. Leiter at 12:45 PM