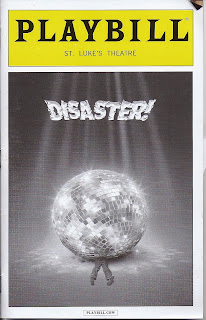 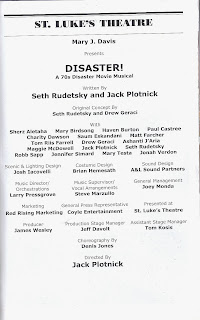 Yes, it’s cheesy and silly. Yes, it’s overacted (deliberately) and reminiscent of an inflated college frat show. But also yes, it’s about as much fun as you’ll find in any Off-Broadway musical right now. And one more yes, about the only thing serious about it is how you should be considering making a trip to St. Luke’s Theatre on W. 46th Street to see one of its four weekly performances. DISASTER! is anything but what its title implies and, for all its imperfections, will provide you with two hours and 15 minutes of entertainment too clever to be as mindless as it pretends to be. The marvelous Playbill cover says it all. 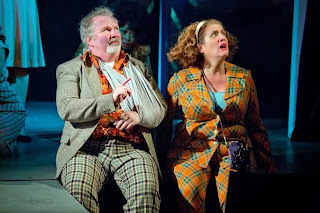 Tom Riis Farrell and Mary Testa. Photo: Jeremy Daniel.
This is the kind of energetic send-up that revels in its own tackiness; its cheap sets and phony effects wouldn’t be half as funny if they were more expensive and sophisticated. Everything about DISASTER! reeks of the positive “let’s put on a show” energy that you might expect of a bunch of talented youngsters who want to see how creative they can be on a dime. Taking the conception of Seth Rudetsky and Jack Plotkin, who wrote the thing, a terrific cast made up of both little-known and better-known performers, puts its talent where its mouth is and plays this parody of 1970s disaster movies to the hilt, knowing just how far to push its farcical excesses, and also how to put over the many pop songs of the disco era that litter the script and get squeezed for laughs while reminding you of how musically tasty many of them still are.


The show is set in 1979  on a casino ship attached to a New York pier. On board are Sister Mary (Jennifer Simard), a dryly pious singing nun with a gambling problem, and a ukulele slung across her back; Dr. Ted Scheider (Mr. Rudetsky, the show’s co-writer), a disaster expert who keeps predicting each disaster before it happens, although no one believes a word he says; the sleazy casino operator, Tony Delvecchio (Paul Castree, who alternates with Jack Plotnick, the other co-writer); Marianne (Maggie McDowell, understudying for Haven Burton when I saw the show), a pretty, blonde TV reporter; Chad (Matt Farcher), a handsome waiter once engaged to Marianne, who left him at the altar when she opted for her career over marriage; Shirley (Mary Testa) and Maury (Tom Riis Farrell), an overweight Brooklyn--judging by their terrific accents--couple celebrating 35 years of marriage, although Shirley is dying of some disease; Levora (Charity Dawson), a hefty black soul singer who carries a pet dog in her handbag; Jackie (Mary Birdsong), the ship’s sequin-gowned headline entertainer, in a relationship with Tony; Ben and Lisa (Jonah Verdon), a set of preadolescent twins played by the same cross-eyed child actor; and several other ensemble players, all of them able performers who can sing, move, and wreak comic havoc.


It takes some time to build up the situations and introduce the caricatures (it’s hard to call them characters), but when the pieces are in place, everything begins to crumble, tumble, and collapse hilariously as the casino encounters, one after the other, an earthquake, an explosion, an inferno, killer bees, piranhas, sharks, and rats. The onslaught of disaster movie crises has these folk looking for the escape hatches, but also finding love and happiness amidst the ruins. 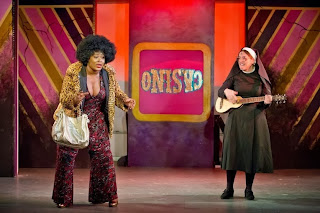 Charity Dawson and Jennifer Simard. Photo: Jeremy Daniel.
What makes it all work is the ridiculously funny way Messrs. Rudetsky and Plotkin have interpolated familiar disco (mostly) tunes into the show to highlight the multiple complications and catastrophes. For example, when the guests are told they must evacuate the ship, they start singing “Don’t Bring Me Down”; when Chad and Marianne recall their doomed affair, he sings “Alone Again, Naturally”; when Sister Mary debates putting a quarter in the slot machine, and is torn between her faith in Jesus and her gambling compulsion, she launches into “Torn between Two Lovers”; Marianne expresses her career vs. marriage conflict by singing “I Am Woman” and “You Want to Marry Me”; Shirley and Maury, still happy after three and a half decades of marriage, sing and dance to “You’re Still the One”; and the show finds room for many other 60s and 70s standards, such as “Hot Stuff,” “Signed, Sealed, Delivered,” “Feelings,” “Knock on Wood,” “You Make Me Live,” “Baby, Hold on to Me,” “Stop, You’ve Blown It All Sky High,” “When Will I Be Loved?” “Don’t Cry Out Loud,” “I’d Really Love to See You Tonight,” “It’s Daybreak,” and “Hooked on a Feeling.”


Few songs are sung in their entirety; often we get only a few bars or a slightly longer, yet still truncated, version, but always enough to keep the action moving and to get a laugh by the choice of music. The lyrics, while remaining intact, take on new inflections by the way they’re interpreted within the comical circumstances, which often find lodes of uproarious gold in them thar words. One of the nuttier instances is when a character dies after being sliced and diced by a falling ice sculpture and her husband gives her a burial by sea, throwing each body part into the water as he sings, “Once, Twice, Three Times a Lady.” Another—which you can see coming a mile away—is when Lisa, the twin, enters carrying a dummy representing her injured brother, inspiring her to sing, “He Ain’t Heavy, He’s My Brother.” And when Chad and Marianne finally resolve their romantic issues, what better to mark it than “Reunited"? Much as you may love these golden oldies, don’t expect to hear them in their pristine versions, but only as they help to garner yucks in the context of the crazy carryings on in DISASTER!


Furthering the silliness is the low-budget set of sliding and swiveling panels covered in 70s-style angled stripes by designer Josh Iacovelli, who also did the lights. Brian Memesath’s costumes, which go heavy on the polyester, are a big help as well. All the performers contribute to the fun, especially the always terrific Mary Testa, whose bits include a wonderful Morse code number with the company choreographed by Denis Jones in SATURDAY NIGHT FEVER style. Matt Farcher has a really good tenor voice that brings true musical values to even his spoofiest numbers, while Marianne Birdsong, new to the show, delivers both as a comedienne and singer. Charity Dawson has that Aretha quality down pat, while Jennifer Simard’s underplaying of Sister Mary is a perfect comic counterpoint to the frenetic goings on around her. I also got a big kick out Jonah Verdon, the 13-year-old kid who makes an indelible impression as both Ben and Lisa, using quick changes involving a hat with a girl’s wig attached. Seth Rudetsky, who vaguely resembles a George Hamilton clone gone seriously wrong, brings just the right touch of camp to the “double Ph.D. scholar” who serves as the show’s persistent voice of reason.


There’s no question that what looks at first sight like a borderline amateur show is actually being done with the highest professionalism by a cast of enthusiastic hell-raisers and ship sinkers who unabashedly play directly to the audience while never for a second losing the beat or the perfect timing of their exaggerated shenanigans. Let’s face it. The material is thin, not all of it works, and you wonder, when it comes, why an intermission is necessary and what more can be yanked out of the tube in a second act. But when it’s all over you realize, hey, you’ve had a really good time watching these screwballs facing death and dismemberment from so many Hollywood-generated calamities. You may even want to get home to dig up those 8 tracks again. Unless they’re buried in the rubble or were eaten by the rats.
Posted by Samuel L. Leiter at 10:00 AM