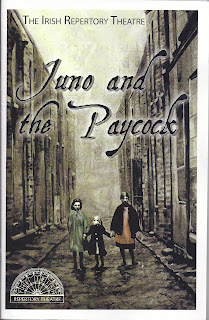 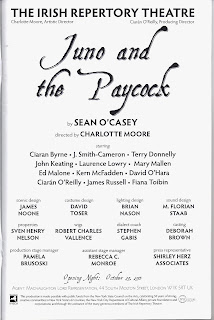 “Paycock” (peacock) is only one of the many thickly Irish-accented words spoken in the Irish Repertory Theatre’s solid revival of JUNO AND THE PAYCOCK, Sean O’Casey’s 1924 tragicomedy set in Dublin’s slums in 1922 during Ireland’s bloody Civil War, the so-called Troubles. Director Charlotte Moore has brought energy and life to this naturalistically dire, unsentimentally satiric picture of a troubled family held together by its long-suffering but resilient matriarch; it’s not a perfect production, but it’s about as good a one as any American company can be expected to offer, especially one ensconced in an intimate, physically limited Off-Broadway venue. 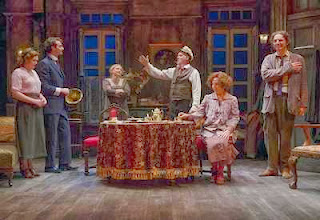 
This is a world of drunks and liars, “prognosticators and procrastinators,” as Jack Boyle, the eponymous “paycock,” calls them, ignoring how closely he himself fits the bill; a world of financial hardship, laziness, guilt, loyalty and betrayal, love and dishonor, debt, inhumanity, and a religious faith drilled so deeply into human souls as to allow questioning but never abandonment of belief in God’s existence. It is also a place of dreams of a better life, for these people and for Ireland, and, even in characters as lowly as Jack and his shifty drinking “butty” Joxer (John Keating), O’Casey manages to plant the seeds of poetry, which blossom in his language like flowers from the manure of despair. Ms. Moore’s production, to a satisfying degree, captures this complex world, in which booze, dancing, and singing mingle with pain, anguish, and suffering, belief does battle with skepticism, and human decency, ever in short supply, gleams like the full moon when it emerges..


JUNO AND THE PAYCOCK is rich in character and incident, and, despite its closeness to a particular time and place, hasn’t lost its universality and power. In The Irish Dramatic Movement, Una Ellis-Fermor, writing of it and O’Casey’s other early plays, notes that “he reveals, almost as though unconscious of the novelty of his picture, the easy, vigorous, expressive speech and action of people in continual and inescapable contact with their fellows; the mixture of good-fellowship and protective, selfish indifference. His people reveal now the distracted, unstable habits of mind that spring from continual stimulus and a procession of minor excitements, now the seemingly callous detachment, the bleak and lonely obstinacy that is a stronger personality’s resistance to this bombardment directed upon its attention and emotion.” 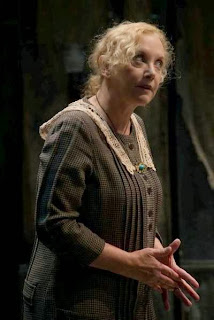 J. Smith-Cameron. :Photo: James Higgins.
These words suggest the difficulty actors face in successfully realizing such a world. In this revival, even the best of the company tend to push a bit too hard in act one, threatening the veracity of O’Casey’s naturalistic world. But most of them overcome this weakness and the production proceeds to benefit from many carefully molded performances, even in several small roles. Ciarán O’Reilly excels as Jack Boyle, the blustery, shiftless, blarney-spouting head of the household, regaling the world with his fantasies about once being a world traveling sailor, and complaining of leg pains whenever the possibility of work arises. J. Cameron-Smith is superb as Juno, the pious, decent, stalwart wife and mother, who has no truck with Jack’s foolishness yet is herself foolish enough to entrust him with handling affairs after the family learns of a fortune it presumably has inherited. Each actor brings true conviction to their demanding roles, he as the drink-sodden loudmouth, she as the maternal force constantly fighting an uphill battle against his eternal malingering and ignorance, while also facing the problems created by Mary’s romantic affairs and Johnny's physical and psychological issues. Ms. Cameron’s bleached, blonde hair, though, strikes a false note for a woman in such straits.


The supporting players include David O’Hara, who turns in a commendable job as Jerry Devine, the union man who loves Mary but turns her down when he learns of her pregnancy. As Charlie Bentham, the schoolteacher who gets Mary pregnant only to abandon her, James Russell is suitably supercilious, while Mary Mallen’s Mary is honest and sincere in one of the less flamboyant roles. More colorful is Terry Donnelly as Maisie Madigan, who creates a strong impression, both comic and serious, in her several scenes. And Fiona Toibin as Mrs. Tancred, stoically mourning the death of her son, makes the most of her brief appearance.


Not as successful are John Keating's Joxer and Ed Malone’s Johnny. As Joxer, constantly spouting aphorisms and calling everything “daarlin,” the usually dependable Mr. Keating overdoes the part, playing too broadly, and missing the subtle lyricism and humor given by O’Casey even to this creepy character. Mr. Malone’s Johnny, who lost an arm and was shot in the hip during the conflict, has a guilt-racked whininess that endangers any sympathy he might otherwise acquire.


O’Casey often fills Jack Boyle’s mouth with mangled eloquence, as when he asks, “I ofen looked up at the sky an’ assed meself the question—what is the moon, what is the stars?” Whatever they are, they’re shining on this revival, belying Jack’s favorite mantra, “The whole world’s in a terrible state of chassis.”
Posted by Samuel L. Leiter at 10:11 AM