Site-specific theatre means seeing a play in a nontraditional environment where you will probably be required to walk about from one part of the space to another, and where the architecture itself conjures up the reality of the world suggested by the play. Thus, if the play is set in a loony bin, it would be best to stage it in an actual asylum but, such places being hard to come by and probably not as weird as the producers would like, a venue with the proper atmosphere is usually rounded up, such as a disused and decaying hotel or other appropriately evocative locale. 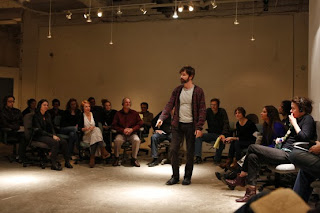 THIS IS MY OFFICE, a site-specific play by Andy Bragen, directed by Davis McCallum and produced by the Play Co., is being performed in a raw space at 210 E. 43rd Street, a little more than a block from Grand Central Station. Its transformation has been overseen by an organization called Chashama that, according to the program, “nurtures artists by transforming unused property into work and presentation spaces.” You enter a white storefront room, with pale gray carpeting, right off the street, hang your jacket on a rack, and take your seat facing a small projection screen and an overhead projector. To your right you can see people outside passing by. Free coffee is available. Everyone gets a headset, which will come into use a little later. An actor appears and says his name is Andy Bragen, but it’s really David Barlow playing Andy Bragen, the author of the evening’s play. Mr. Barlow is a youthful, pleasant-looking, slender, bearded man who plays a guy of 39 going on 40.


Using the overhead projector, “Andy” introduces us to how he came to write the play we’re seeing tonight, which is the outgrowth of a Workspace Residency he received from the Lower Manhattan Cultural Council. The play was presumably written in a downtown office where his residency took place, and we will gradually understand that the space we’re now occupying is its stand-in. As it turns out, the site-specific environment designed by Andrew Boyce, cleverly lit by Tyler Micoleau, is an inadequate substitute, as it fails entirely to conjure up the world of offices of which Andy informs us he’s so enamored. It’s essentially an anonymous open space with a high ceiling and concrete floor; there are no office cubicles, furnishings, or passageways, all of which we’re supposed to imagine being there.


Andy’s presentation, which includes projecting the map of an office complex whose layout he explains, tells us of his love of offices. Soon he has the audience follow him into a larger, adjoining room, where the complex he has referred to is to be imagined, and where the headphones come into use.  After standing about for a few minutes, whoever can grab one (the friend who accompanied me was out of luck) takes a seat on a rolling office chair. As Andy continues, he occasionally has the audience roll their seats into different configurations to follow him as he moves from one part of the space to another, such as a corner of the room where a desk and other office accessories are located.


Andy is telling us his partly fictionalized autobiographical story about why he loves offices, and about his residency experience, which allowed him to occupy an office for nine months and do whatever he pleased. He was suffering from writer’s block when he made a remarkable discovery in the office (I think it was stuck in an air vent) of an old Polaroid (we all get a Xerox copy) that led him to contemplate his relationship to the life of his late father, Harold, who, by an astonishing coincidence, worked in the very same office many years before. By the end of the 90 intermissionless minutes we’ve experienced what I can only call a shaggy dog story cum eulogy, in which Andy confronts his feelings about his and his own father’s unfortunate failings but also his abiding love; he also offers details of his father’s liver cancer and subsequent death. In the process, Andy comes to understand something about himself and his own problems. The final scene completely abandons the office metaphor and takes the audience into a purpose-built bedroom, around seven feet high, with a stucco ceiling, striped wallpaper, and a window with vertical blinds. It’s empty except for the bed in which, we’re to imagine, Andy’s dad died. At the end, there’s a scenic surprise, and the performance is over.


I wasn’t particularly impressed by Mr. Bragen's story, which rambles too casually and is both too personal and too common to be of abiding interest, but I was nevertheless gripped by Mr. Barlow’s casual but engrossing performance, which helps lift the story’s everyday banality and even solipsism to a higher plane. He speaks for much of the time with a quiet, even whispered (thus the headphones), restraint and friendly naturalism, seeking to connect with the audience to get their support for the emotional difficulties he’s experiencing, because of both his father’s weaknesses and his own. His accessible appeal makes you feel, even in a room of two dozen people, that he’s speaking directly to you.
Mr. Barlow, who was outstanding earlier in the season in the Potomac Theatre Company’s THE CASTLE and SERIOUS MONEY, is increasingly showing that he’s an actor to watch. As for Mr. Bragen, let’s just say "I will be out of the office today and plan to return tomorrow. In case of emergency, please read the above."
.
Posted by Samuel L. Leiter at 8:24 AM