163. A GENTLEMAN’S GUIDE TO LOVE AND MURDER 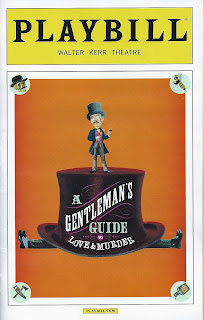 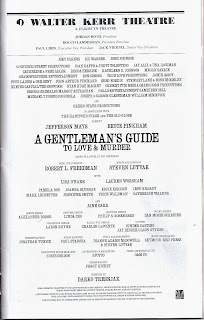 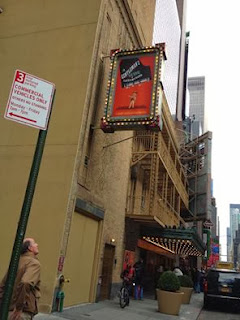 
With the current theatre season approaching what many consider its midway mark (technically, the awards season, which actually begins in May, reached midpoint at the end of October), it will come as no surprise to state that A GENTLEMAN’S GUIDE TO LOVE AND MURDER, which officially opened at the Walter Kerr Theatre two weeks ago, is probably a frontrunner for whatever awards are available to it. I base this simply on the great many ecstatic reviews it’s received, and on my own comparison of it to the competition, which has not been especially overheated thus far. There’s no doubt the show, which had its world premiere at the Hartford Stage and was then seen at San Diego's Old Globe, is exceptionally well-staged (by Darko Tresnjak) in a style reminiscent of British music hall performance, and that it contains a sterling company and memorable design elements. Robert L. Freeman and Steven Lutvak’s lyrics are as witty and smart as any to be heard on or Off Broadway this season, but Mr. Lutvak’s music, while often pleasant enough and always appropriate to the show’s requirements, floated away without making much of an impression.. 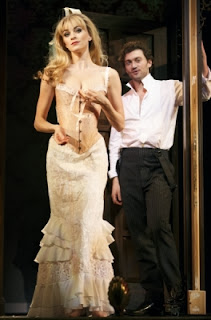 Lisa O'Hare and Bryce Pinkham. Photo: Joan Marcus.
The basic story of A GENTLEMAN’S GUIDE will be familiar to anyone who’s seen the classic British film comedy, KIND HEARTS AND CORONETS (1949), set in the Edwardian era, in which the great Alec Guinness displayed his versatility by playing eight different members of the D’Ascoyne family, each of whom gets bumped off by a poor young man who comes to the belated realization that, with them out of the way, he can succeed to the family wealth and title. The film was based on a 1907 novel by Roy Horniman called Israel Rank: The Autobiography of a Criminal, in which the murderer is half-Jewish, and whose treatment could be considered anti-Semitic. The ethnicity of the murderer’s father is the reason that his mother was disowned by the D’Ascoyne family, so it was changed for the movie from Jewish to Italian; the Broadway show, which claims to be derived from the novel, not the movie, changes it to Castilian. Thus the novel’s Israel Rank became the movie’s Louis Mazzini, who becomes the musical’s Monty Navarro. The D’Ascoyne family is now the D’Ysquith family, and other names are similarly altered, but some remain the same.
Bryce Pinkham, a nice-looking young actor-singer with a fine Broadway voice and light comic stage presence, plays Monty, bringing to it a nice touch of believable sex appeal and malicious glee as his comically murderous successes pile up and his fortunes improve. Jefferson Mays, who came to fame playing multiple roles several years back in the one-man I AM MY OWN WIFE, plays the many victims of Monty’s ambition. Mr. Mays’s performance is highly touted as one of the principal reasons for seeing this show, and it definitely is noteworthy. However, despite Mr. Mays’s ability to make rapid costume and makeup changes to play the many D’Ysquith victims, they are almost all—including the buxom Lady Hyacinth—variations of the same upper-crust, stiff upper lip, snooty, high British-accented type, and there is never for a moment any question that we are seeing the same actor working his tail off to effect multiple quick changes. His energy, charm, and technical skill notwithstanding, Mr. Mays, in my opinion at least, is not giving the performance for the ages some have credited to him. A great deal of his success lies in his costuming, especially when he dons muscular shoulders and arms to play the aggressively macho Major Lord Bartholomew D’Ysquith. 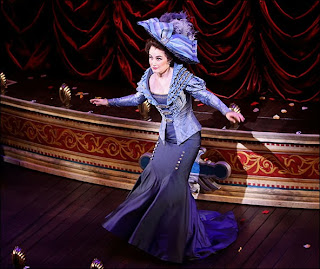 
The beautiful women in Monty’s life are perfectly represented by Lisa O’Hare as Sibella Hallward, the gorgeous blonde narcissist and gold digger, who sings “I Don’t Understand the Poor,” and Lauren Worsham, who plays the purer, more idealistic brunette, Phoebe D’Ysquith. Each of these ravishing actresses sings exquisitely and brings spirited comic enthusiasm to her role. In the smaller but significant supporting role of Miss Shingle, the older woman who informs Monty of his relationship to the D’Ysquith family, Jane Carr is an absolute delight, brimming with theatrical joie de vie. All the other roles are minor accessories played by a gifted ensemble of six, offering their own display of versatility as they make multiple costume changes.


The occasional farcical excesses (including one number, “It’s Better with a Man,” lathered with campy homoerotic shtick) are probably unavoidable in a show that is essentially a pastiche of Edwardian melodrama; the action transpires on a set brilliantly conceived by Alexander Dodge as an elaborate Victorian toy theatre, set several feet upstage of the apron lip, with the actors playing both within it (often against delightful projections by Aaron Rhyne). One scene, set at Monty’s home, stands out for the way it depicts two rooms on either side of a hallway represented by an arch. Sibella is in one room and Phoebe in the other; in what I believe is the show’s standout sequence, the arrangement allows Monty some unforgettably amusing maneuvers as he attempts to prevent the women from encountering one another. All three players are totally on their game during this tour de farce. 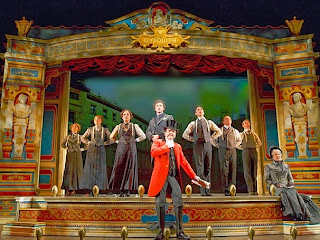 Matching Mr. Dodge’s period setting are the truly lovely costumes of Linda Cho, who captures the essence of Edwardian men’s and women’s costumes with historical accuracy graced with humor and imagination. Peggy Hickey’s choreography is more in the vein of staged movement than conventional dance numbers, but it is very well conceived and expertly performed.


My reservations about the music come from so many of the songs being in the patter style, familiar not only from Gilbert and Sullivan, whose work they often resemble, but from shows like MY FAIR LADY, where the star has to speak-sing the lyrics without the music being too challenging to sing. Mr. Mays can carry a tune, but his is not a traditional theatre voice and the songs seem geared to his musical abilities.


Because of its persistent two-dimensionality A GENTLEMAN’S GUIDE TO LOVE AND MURDER sometimes becomes too thin for sustained interest. It was hard to keep THE MYSTERY OF EDWIN DROOD from invading my thoughts as I watched it; that show, set somewhat earlier in the Victorian era, spoofed the style of old time melodramas in a not too dissimilar way, but did so with a richer storyline, a wider range of interesting characters, more melodic songs, and considerably more humor. A GENTLEMAN’S GUIDE may be at or near the forefront of this season’s musicals thus far, but with five months left before the season ends, I’m looking forward to seeing what challengers it’s going to face.
Posted by Samuel L. Leiter at 7:33 AM