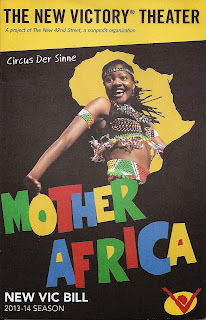 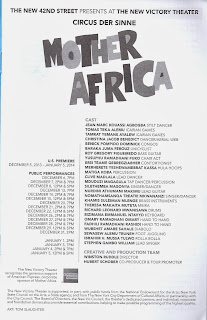 Fifteen minutes after leaving the dark, adult atmosphere of THE JACKSONIAN, where the threat of danger was barely palpable, Marcia and I were comfortably ensconced two blocks away at the New Victory. We sat amid an audience of happy children and their parents as we waited for the start of MOTHER AFRICA, a circus show where real danger would soon be lurking behind otherwise joyous smiles. While not the death-defying ones we often see under the big top when aerialists fly without nets, the acts on display here are risky enough to threaten fragile flesh and bones.


MOTHER AFRICA is an international touring circus created by director-producer Winston Ruddle for Circus der Sinne (Circus of the Senses), which draws performers from all over the Dark Continent to its training facility in Dar es Salaam, Tanzania. The show is Africa-themed throughout, with flamboyantly vivid costumes, masks, and makeup, percussion- and flute-dominated music, and a wide range of images (created by Hubert Schober) projected on the backdrop. Of course, what we see are traditional tourist-oriented images, and not something more authentic. This is show biz, not politics or anthropology. Except for some musical numbers, the acts themselves are only tangentially African. While there’s a stilt dancer in a terrific costume, mask, and headdress, for example, stilt dancing itself is not a specifically African feat, nor are any of the other acts, nearly all of which have been seen locally in other circus shows, albeit with different twists and nuances.
I don’t mean to detract from the entertainment value of these numbers, which is high enough to keep an audience of booster-seated tots entranced for the hour and 45 minute, one intermission, show. The intermission, of course, is crucial, as the lower level of the New Victory is filled with concession stands selling souvenirs and what not. I’m simply referring to the relative lack of originality in acts that seem to be standards in today’s world of intimate circus shows, the kind done on proscenium stages, like MOTHER AFRICA, or in small arenas using tiny, circular stages, as at LA SOIRÉE or SPIEGELWORLD. 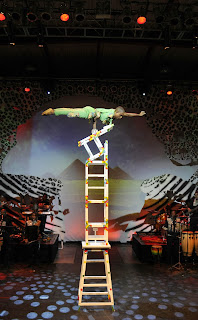 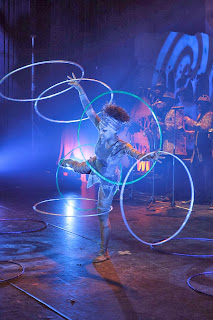 So what’s in store if you flip, leap, jump, fly, or roll into MOTHER AFRICA? You’ll see an upstage band of musicians and singers standing before a backdrop with the aforementioned projections of iconic African images, from lions to pyramids; a woman named Sewasew Alemu Truneh lying on her back, head toward the audience, spinning large objects, such as a ceramic urn and table, at dizzying speeds on her raised, bare feet, while doing likewise with round, woven mats that look like flying pizzas; a guy named Yusuphu Ramadhani Fuko building a structure of four chairs and doing one-handed balancing tricks at the very top; several song and dance acts, including a tap dancer named Mduduzi Magagula, built like an Adonis (ditto a number of men in the show), tapping the hell out of the stage, and also doing some incredible drumming on one of those conga-like instruments; a hula hoop routine, wherein Merherete Yeshewamebrat Kassa (they should put you in the show if you can say that 10 times, quickly) spins the hoops on every limb, singly and in armies; a contortionist named Ersi Teame Gebregziabher who can so manipulate his freaky body that he’s the closest thing I’ve seen to a human arachnid as he scampers about on what seem like eight legs; Ibrahim H. Mussa Tulwa doing the Rolla Bolla thing, where he balances on a metal plate set on top of several steel cylinders; a unicyclist named Baraka Juma Ferous who can go from a 12-foot high cycle to a tiny one only a toddler could conceivably sit on; a remarkable Diabolo act—you know, the one with a string and spinning objects shaped like two bottom-to-bottom cups joined by an axle—presented by Wubshet Amare Sahale; a couple of muscle-bound dudes, Omary Ramadhani Omary, and Fadhili Ramadhani Rashidi, doing a man to man balancing act needing superhuman strength and agility; and the pièce de résistance, Tomas Teka Alemu and Tamrat Yemane Ayalew, doing their Icarian Games act. This involves the adult man, Tamrat, lying on his back and flipping Tomas, a beautiful 12-year-old boy, around the way the foot juggler I mentioned did with urns and tables.
Another performer announced that the world record for the number of successive flips of a certain kind was 25 and that Tamrat and Tomas would now attempt to surpass it. A review of the show I’d read said that the reviewer was present on a night when they reached 31 and decided to stop. When I saw it they hit 50, so they probably vary it from night to night. Of course, the audience counts along with the act, just as it claps during the rhythmic musical routines.


All the performers give the impression of having great fun. Their energy and enjoyment beams from stage to spectator with unrelenting force. So, if you’ve been to the circus often, you won’t be surprised by what you see, African accents and décor notwithstanding, but you’ll still have a good time. You'll have an even better time if you bring a child whose face you’ll probably be looking at more than at the show, just to delight in the pleasure it will be reflecting.
Posted by Samuel L. Leiter at 12:50 PM