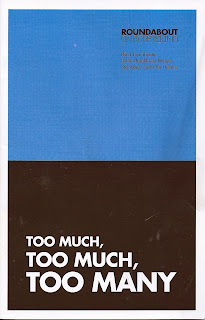 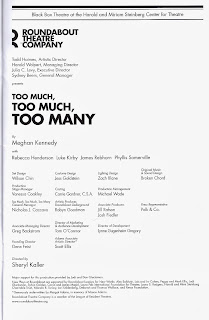 After seeing three superlative plays/productions in a row, THE NIGHT ALIVE, SAD AND SWEET (in the Apple Play series), and NO MAN’S LAND, it would have been asking too much to have expected a grand slam when I visited the Roundabout’s Black Box Theatre in the basement of the Laura Pels Theatre. My expectations were therefore muted, and my disappointment at sitting through the tedious, snail-paced, soppy play on view, Meghan Kennedy’s TOO MUCH, TOO MUCH, TOO MANY, was thereby not as great as it might otherwise have been. If ever a one-act play clocking in at 70 minutes seemed twice as long, this was it. 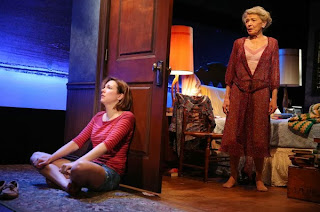 
The subject, the agony families face when a loved one comes down with Alzheimer’s, has become rather familiar in recent plays (if it’s not Alzheimer’s, it’s dementia); of course, this can be an automatic emotional Molotov cocktail for many theatergoers, especially the older crowd that subscribes to companies like the Roundabout. It's fraught with potential power, as is any work about someone's decline in physical powers because of some external force, be it illness or accident. James Rebhorn, an always dependable presence on stage and screen, plays the elderly victim, James, who has already died when the play begins, but who appears in flashbacks and ghostly sequences where we see the gradual loss of his mind and the enfeebling of his mobility.

TOO MUCH, TOO MUCH, TOO MANY shows how his death by drowning in a lake has affected his 78-year-old wife, Rose (Phyllis Somerville) and unmarried 39-year-old daughter, Emma (Rebecca Henderson). Rose has locked herself in her room for over half a year, refusing to come out, and Emma is forced to speak to her through the closed door. Emma herself has become a recluse, even if the door to her heart can't be seen. When her father appears, it is usually in her memory, not her mother's. How she makes a living, or where the money has been coming from to maintain the household is simply not addressed, nor is the absence of siblings mentioned in the script.


Wilson Chin’s realistic set, with a practical sink, is divided into two sections on the small stage, a kitchen with a door to the outside on stage right, and the bedroom on stage left, where the door is set upstage center at a right angle to the front of the stage. There is no wall downstage of the door, so spectators on the other side of the room can see into the bedroom. When someone speaks to Rose it's from the small passageway between the kitchen and bedroom. How food is delivered to Rose is not explained, nor are we told how any of her needs, such as her laundry, are taken care of.


John Hidge (Luke Kirby), a good-looking young man of 33, has become the new pastor (no denomination is named) at Rose and Emma’s church. Wearing a preacher’s collar (later changed to mufti), he comes to visit at the bequest of concerned church members, hoping to talk Rose into leaving the room. He spends hours outside her door, at first reading from the Bible, later from writers like Walt Whitman (Rose's favorite), and even playing Go Fish with her by sliding the cards under the door. It's nice to know that pastors have the time to spend half their days making house calls to the same parishioner on a daily basis. Rose is never rude to Pastor Hidge, and gradually accepts his friendship, but she makes no sign of ever opening the door. (Personally, if all I wanted to do was sit in my room and read and a stranger showed up for hours every day, reading the Bible and talking to me through my door, I’d call for the cops to get him the hell out.) At his urging, the pastor and Emma begin to date, he claiming that if Rose believes their relationship is warming up, she’ll be interested enough to open the door. Plausibility, where hast thou flown? Naturally, the relationship evolves into something serious, and--uh, oh--we soon learn that the pastor, if that’s what he really is, has secrets he’s been hiding.


None of this is at all believable. Rose seems perfectly content in her bedroom, where she keeps herself well groomed (Ms. Somerville's silver locks are perfectly coiffed throughout) and busy reading overdue library books. She never seems particularly grief-stricken, and her comments to Emma and the pastor show a rather worldly wise and well-adjusted matriarch whose choice to cut herself off from the world in the wake of her husband’s death is essentially incomprehensible other than as an artificial dramatic device. Ms. Somerville gives Rose a sweet and pleasant affect that betrays little suffering; it’s Emma, in fact, who seems the most emotionally distraught. When John, faced with Emma’s suspicions, finally reveals his secrets, and when Rose ultimately tells Emma how James must have died (was it really suicide?), the information is unsurprising and commonplace; in fact, it’s about as authentically dramatic as the recipe for sweet potato pie Rose gives Emma through the door.

For Emma’s first date with the pastor, about which she has been ambivalent, she dresses in a skin-tight sheath (costumes are by Jess Goldstein); I was puzzled about the message she was sending, which was completely at odds with the image of her as the churchgoing spinster who, at her mother's oddball request, spends her time repeating, over and over through the door, a verbatim description of what James looked like when his body was found. The morbidity of this exercise seems totally out of character for the Rose we get to know, and appears to be just another playwright's trick to make her characters interesting. The veneer of poetic dialogue spoken by the characters does little to mitigate their hard-to-swallow behavior.


The most annoyingly cloying  and hard to stomach scene occurs when Rose puts on a Billie Holiday record and dances to it (swing music from the 30s and 40s is heard throughout the play), inviting the pastor to fake dance with her on the other side of the door; he even says that he's about to twirl her. As they dance like this, James himself appears in suit and tie as he was when hale and hearty, and actually does a lovely fox trot with his wife, who has dressed up for the occasion in a filmy dress and heels almost as if she knew he were coming.


To disclose Rose’s fate would be a spoiler, but I thought it another cliché that offers the easy way out and fails to truly resolve her problem. You can guess for yourself where Emma and the pastor are in their relationship when the play concludes.


Perhaps in an attempt for quiet naturalism in the intimate Black Box, Sheryl Kaller has directed with a near-total lack of urgency; none of the actors other than Mr. Rebhorn makes much of an impression, and he only because his illness gives him the most expressively demanding role. As my guest, a director, suggested, the characters’ stakes never seem high enough. A pall of ordinariness hangs over everything, with empty pauses (oh, for those Pinter stars!) that merely add to the draggy pace. Perhaps if TOO MUCH, TOO MUCH, TOO MANY actually had the poignancy and humor other reviewers have experienced I wouldn't be compelled to dismiss it as too little, too little, not enough.
Posted by Samuel L. Leiter at 8:01 AM