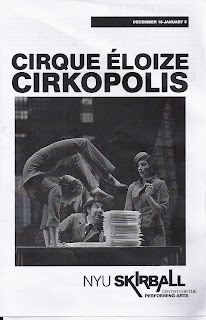 The star on top of the Christmas tree of 2013’s holiday theatre offerings proves to be yet another circus-oriented show, with beautiful young men and women performing remarkable feats of acrobatic and gymnastic derring-do, climbing poles, juggling, flying through the air, balancing in unbelievable ways, rolling around in large wheels, hanging from straps, cavorting on a trapeze, and otherwise using their muscular and flexible bodies to do what most of us can only dream of. The show is CIRQUE ELOIZE CIRKOPOLIS and it edges out in overall unity of design and conceptual artistry its recent rivals, including LA SOIRÉE, MOTHER AFRICA, and those parts of NUTCRACKER ROUGE that put it in a similar category.


CIRKOPOLIS, the ninth show produced by a Quebec-based company called Cirque Éloize, is at NYU’s attractive Skirball Center for the Performing Arts. It is the creation of Jeannot Painchaud, artistic director and co-director, and Dave St. Pierre, co-director and choreographer, who fill the large stage with projected still and moving, computer-generated images of the oppressive, fast-paced, dehumanizing world of the modern urban jungle..


A picture of a city skyline shows it being supported by a giant mass of gears, making it a mechanical monster that seems to make the people living and working in it into robot-like cogs whose lives are devoted to going and coming in an endless stream of work-related tasks devoted to keeping the entire thing moving. The black and white graphics of huge, impersonal environments, often dominated by giant filing cabinets, create a combined retro and futuristic world, reminiscent of Fritz Lang’s 1927 silent movie, METROPOLIS (which probably inspired its title), including scenes that show the workers trudging mechanically to and fro like downtrodden robots. There’s also a touch of Sophie Treadwell’s 1929 play, MACHINAL (soon to open at the Roundabout). Robert Massicotte is credited with having designed the striking sets and for co-designing the memorable video projections with Alexis Laurence. The excellent lighting is by Nicolas Descôteaux. 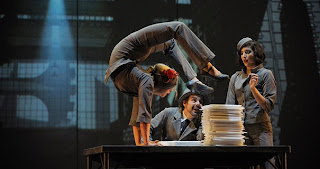 
Designer Liz Vandal’s costumes, mainly drab suits, coats, and fedoras, are predominantly in shades of gray, but as the show progresses a number of primary colors are introduced, especially in the women’s silken shifts, to contrast brilliantly with the grays; they also show up in the men’s ties and, in some cases, their cuffs. The scenic scheme remains black, white, and gray, but the final moments introduce a wonderful bit where the stacks of white paper that dominate so many scenes are replaced by multicolored ones that are sent flying into the air to create a shower of brilliant hues.


Despite the dullness of their existence, the workers find ways to brighten their environment by the pride they take in their physical abilities; the various skills on display are put to work both to represent the impersonal mechanization of the workers’ lives (huge gears keep turning in the background of most projected scenes) and to suggest their inner delight in overcoming such depersonalization by the pleasure they take in their respective talents. Most, in fact, are multitalented, able to perform in several circus specialties. 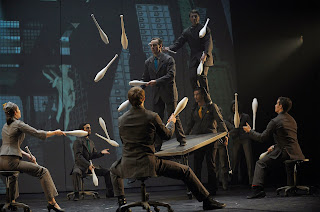 The individual acts are all familiar ones, many being the classics on view in each of the recent circus shows, although they take on a fresh appeal because of the creatively new ways in which they’ve been choreographed. Having seen a female performer do her Cyr wheel act in NUTCRACKER ROUGE made seeing a similar act in CIRKOPOLIS that much more interesting because it allowed me to see how each artist took the same basic 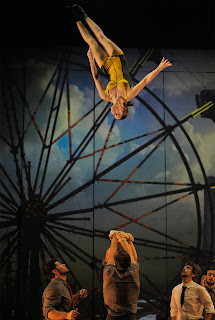 Photo: CIRQUE ELOIZE CIRKOPOLIS
concept of a large, rolling, metal hoop and used it to create something unique. CIRKOPOLIS goes a step further when it includes the woman (Angelica Bongiovonni) and her male lover in the act, showing how two artists could make something so simple as maneuvering a metal hoop into a demonstration of dexterity and grace. The show also includes a German wheel act, in which five men do astonishing feats in what is essentially the cyr wheel doubled, that is, two metal hoops joined together by a small number of bars.

Photo: CIRQUE ELOIZE CIRKOPOLIS
In other routines, a man (Ashley Carr) falls in love with a woman’s filmy dress hanging on a clothes rack and dances acrobatically with it; three women in red shifts show what can be done when hanging from the same trapeze; practically the entire company engages in a mass juggling act, throwing juggling clubs across the stage while one fellow stands unfazed amidst the blizzard of flying objects; a couple runs through various mating rituals while clambering up and down a pole and doing hair-raising feats of gymnastic adroitness; a Diabolo specialist does amazing things that overshadow even the Diabolo tricks in MOTHER AFRICA, and then is joined by two other DIABOLO performers; a teeterboard act sends acrobats soaring, and so on.


Photos: CIRQUE ELOIZE CIRKOPOLIS
Although there is occasionally some chatter in French, there is no dialogue per se during the show, but Stéfan Boucher’s impressively atmospheric, and sometimes throbbingly rhythmic score combining sound and music adds immeasurably to the production’s auditory pleasures.


CIRKOPOLIS closes out the theatre year with flair, but circus performances are still no substitute for solid drama and heart-lifting musicals, too few of which—apart from several terrific revivals—have raised the dramatic bar this season. Here’s to better things from our dramatists, composers, lyricists, and librettists in 2014. Circuses, burlesques, revues, and jukebox musicals are necessary, but let us not forget that, when it comes to the theatre that opens our minds, sears our souls, and changes our lives, “the play’s the thing.”