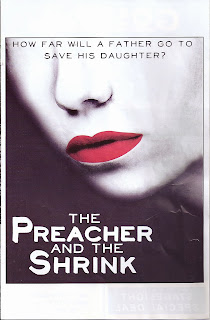 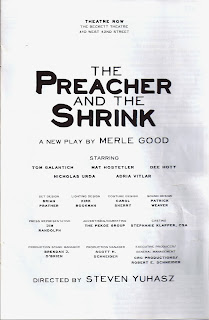 A highly intelligent young woman, the daughter of a widower who is held in great respect in his community, bears an unmitigated hatred for her father. This loathing, to a large degree, stems from the daughter’s belief in the father’s behavior years earlier.  A long time has passed since the daughter has seen her father, but they finally meet, under strained circumstances, and, instead of their finding common ground for reconciliation, the daughter can’t keep her relentless animosity from exploding in her father’s face.
This essential premise is at the heart of two Off-Broadway plays I saw on the same day this weekend, Merle Good’s THE PREACHER AND THE SHRINK, at the Beckett Theatre on Theatre Row, and Dominique Morisseau’s SUNSET BABY, at the Labyrinth Theatre on Bank Street. Of the two, the play by Mr. Good, a newcomer, is by far the weaker, while Ms. Morisseau’s work, despite its flaws, continues the impressive work she showed in last season’s DETROIT ’67.


THE PREACHER AND THE SHRINK, a title more redolent of a TV sitcom than a wannabe serious drama, places us in a rural Pennsylvania town to which Constance Hunter (Adria Vitlar, promising), a sexily dressed young woman in the tightest of jeans and, in one scene, a nearly backless blouse, has returned to teach poetry at a local college. Her dad, Dr. Michael Hamilton (Tom Galantich, believable but ordinary), is a distinguished Protestant preacher (denomination not given), whose wife died of breast cancer seven years ago, which is about when Connie gave up the church and left home to fend for herself. Now that she’s back, she visits a psychiatrist, Dr. Alexandra Bloomfield (two-time Tony nominee Dee Hoty, who clearly has been better), to discuss her feelings, although her attitude is defensive and even rude. Soon she meets her father again, but their rendezvous is chilly, and gets colder when Connie declares that she wants to bring a complaint against the preacher's junior minister, Rev. David Wheeler (Mat Hostetler, uninteresting), for having sexually molested her seven years ago by placing his hand under her blouse and touching her breast. David, a happily married young man, for whom such charges could mean the end to his career and marriage (obviously, his wife isn't the understanding kind), insists on his innocence. Michael visits the shrink for advice (we see the irony, of course, of both the preacher and the shrink being advice givers), and it turns out they were once lovers. Their relationship begins once more to blossom, albeit with Connie's being unaware of it until a soap opera-like discovery. Where was the organ music?


Connie, it turns out, wishes to harm the blandly sincere David as a way of getting back at her father, whose godliness she distrusts. She promises to drop the case against David if Michael will make a certain declaration regarding his faith before his congregation, a declaration that will damage him irreparably. Michael’s deliberations regarding his decision provide whatever suspense the second act intends to generate. 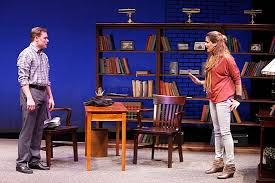 David Wheeler and Adria Vitlar. Photo: Carol Rosegg.
Connie’s bitterness toward her father because of her perception that he’s a religious hypocrite seems far too exaggerated a motive for the damage she’s prepared to wreak seven years after the fact. Whatever suddenly prompted her to take action on her grievance is never explored; it must simply be taken at face value. Her lack of any evidence is never addressed; her mere say so seems sufficient to destroy whomever she pleases, even if--as seems quite possible in the way she's depicted--her mental instability could easily be demonstrated. David’s culpability remains vague; when Mr. Good attempts to raise questions about it by forcing David to recall precisely what did transpire all those many years ago in a moment when he was hugging Connie for moral support only muddies the waters and is both irrelevant and improbable. Connie comes off like a nasty bitch, and even the fate she ultimately meets fails to garner sympathy for her. The play’s artificial complications pile up like Pelion on Ossa, and the audience is left to scratch its head over the implausibility and clumsiness of it all. 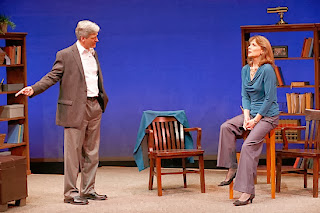 THE PREACHER AND THE SHRINK contains lots of poetry and Bible quoting and talk about otherwise dramatically viable subjects, like the power politics involved in patient-client relationships, the value of prayer, the existence of a God who can allow great suffering in the world (“that hypocrite in the heavens,” Michael cries out of nowhere), parental guilt, ministerial ethics, and so on, but none of it adds up to a truthful drama about real people.  Only by a superhuman effort might you suspend your disbelief to accept the situations and coincidences that Mr. Good concocts.


All the action takes place in a simplified room designed by Brian Prather that serves both as Dr. Bloomfield’s office and Dr. Hamilton’s study, only the color of the background lighting, by Kirk Bookman, helping to differentiate one space from the other. Under Steven Yuhasz’s dullish direction, the acting remains mostly muted, and there is often a flat and stodgy feeling to the pacing and emphases, especially in the early scenes.


THE PREACHER AND THE SHRINK is in two acts and runs around two hours, with an intermission. Even at that modest length it seems too long and overblown. But when the last line comes, practically thrown away as it is, it may take you a moment or two before you realize, with relief, that the play you hoped would end actually has.


Down at the intimate Labyrinth, however, the  intermissionless, 90-minute SUNSET BABY, which had its world premiere in London in 2012, whizzes by, its often powerful script supplemented by three dynamic performances. The action is set in a grittily realistic, drearily rundown  New York project apartment (designed by Lee Savage). When we first meet Nina (DeWanda Wise), the daughter here, she is—like Constance in THE PREACHER AND THE SHRINK—also provocatively dressed, wearing a skin tight skirt and blouse, high heels, and a hooker’s wig, all part of her uniform for aiding her boyfriend, Damon (Harvey Gardner Moore) in his drug dealing and robbery business.


Nina, named for Nina Simone, the blues and jazz singer revered for her involvement in the black revolutionary movement, is the intellectually gifted but socially depressed child of Kenyatta (John Earl Jelks), a black activist who has recently gotten out of jail after serving time for the robbery of an armored truck. His wife, Ashanti X, Nina’s mother, like the mother in THE PREACHER AND THE SHRINK, is dead, in her case from her crack addiction, and the only possession of hers still owned by Nina is a cache of letters to Kenyatta that she keeps hidden. Ashanti X and Kenyatta were leading militants, looked up to by many in the black community, and the letters have substantial value to publishers and scholars, but Nina, despite her financial needs and the crude and dangerous lifestyle she's forced to live, has thus far refused the thousands of dollars that have been offered for them. Kenyatta tries desperately to bring a reasoned warmth to his attempts to reconnect with the daughter he has had very little contact with since he left her mother when Nina was five, because he wishes to obtain the letters for himself, not for financial gain but, it would seem, to help heal his guilt.


Damon, Nina’s drug dealer boyfriend, is a smarter than you’d think trash-talking street hustler who speaks (or often shouts) his lines in hip-hop rhythms. When Nina bitterly turns her father’s request down, Kenyatta seeks the help of Damon, who sniffs the chance to score a lot of money from the older man if Nina can be talked into giving her father the letters. In fact, in his urgency to find the letters, Damon turns the apartment upside down, although he never notices what to every spectator must surely be the first place to look, and that we soon see is exactly where the letters are. This is a flaw of either the writing or staging (by Kamilah Forbes) but, like other weak spots in the work, it only mildly detracts from the otherwise engrossing drama and performance.


Ms. Forbes has inspired high-octane performances from Ms. Wise and Mr. Moore, filled with bitterness and rage. Mr. Moore, with his corn-row hair, vulgar street language, and home boy moves, is a convincing thug. He gets the opportunity to show his softer side when talking about the eight-year-old son he shares with his estranged wife, who hates him, and his well-read side when he discusses sociologist Stephen Spitzer’s distinction between Social Junk (those who passively depend on government support, like welfare) and Social Dynamite (those who fight back, the revolutionaries and activists), and talks of his wish to travel, but his manner is too often gratingly aggressive and loud. Ms. Wise, is an even more potent presence, her disgust with her father’s abandonment of her and her mother being so deep it can raise the hairs on your skin; while she too has her tender moments, the script forces her to maintain a sense of wrath and suspicion that can grow wearisome, but that also earns her points for the conviction she sustains throughout. The scene where she's compelled to declare her love for Damon, whose affection is inextricably entwined with menace, and then to drop her pants before he takes her from behind, is devastating in the way she offers robot-like responses he’s willing to accept, while we see the hollowness in her soul.


The performance of Mr. Jelks is of another sort, since Kenyatta struggles to maintain a veneer of calmness and equanimity as he tries to convince the daughter he ignored in order to follow the revolution to hand over the letters. The effort is palpable, but faced with Nina’s fury and intransigence he ultimately breaks, and the result is overwhelming in its force. We also see him make a video recording of his deepest feelings for Nina, saying things she would never give him the chance to express. (Unfortunately, the projected image of the recording is prerecorded, and is disconcertingly out of sync with Mr. Jelk’s live performance before a camera.) Mr. Jelks, who recently played the Black Muslim aide to Muhammad Ali in FETCH CLAY, MAKE MAN, is an always honest presence, and his work in SUNSET BABY is terrific.


The play, which provides a fine selection of Nina Simone’s music in the background, is not always convincing, since it often drifts from down and dirty street talk to hifalutin prose poetry, especially when Kenyatta records his comments about parenthood and his love for Nina. But with its tingling mix of social junk and social dynamite, SUNSET BABY—titled after the nickname Kenyatta gave the two-year-old Nina on the Pacific Coast—leaves a far more lasting impression of father and daughter dynamics than the faltering THE PREACHER AND THE SHRINK. 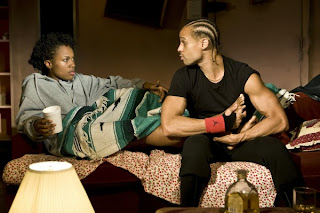