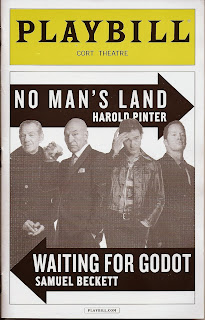 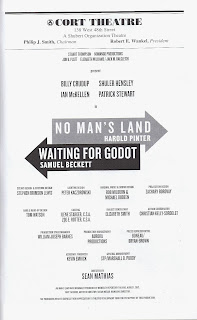 “Phenomenal.” That’s the word used by my wife, Marcia, when she texted her response to a mutual friend about the revival of Harold Pinter’s NO MAN’S LAND, playing in repertory with WAITING FOR GODOT at the Cort Theatre. She was using the word specifically to refer to the acting company, which is led by the certifiably phenomenal Sir Ian McKellen and Sir Patrick Stewart, supported by the highly gifted Billy Crudup and Shuler Hensley. I’m not ready to call Pinter’s murky but often funny play phenomenal, but I will say it is the perfect vehicle for this four-star cast (take that as you will). 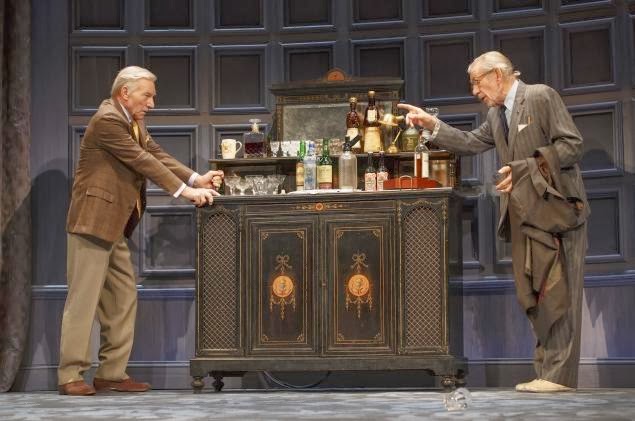 
NO MAN’S LAND, first produced in London at the Old Vic in 1975 (when the play is set), starring Sir John Gielgud as Spooner and Sir Ralph Richardson as Hirst, came to Broadway in 1976. New York’s Roundabout Theatre Company revived it in 1994, with Christopher Plummer as Spooner and Jason Robards, Jr., as Hirst. The current staging, which originated, under Sean Mathias’s superb direction, at the Berkeley Rep in August, stars Mr. McKellen as Spooner and Mr. Stewart as Hirst. These are the kinds of roles with which only the most insightful and vocally, physically, and emotionally talented veteran actors can grapple successfully, as witness the names of those just mentioned; it’s fun to think of how these revivals might have gone had the roles been reversed at alternate performances, the way actors used to alternate in Iago and Othello.


The play gives its two leads opportunities for anger, jealousy, one-upmanship, groveling, braggadocio, wisecracks, sadness, fear, lyricism, menace, drunkenness, and mimic behavior, among other things, as they play out their odd game of power politics in Hirst’s large home in Hampstead Heath, London. Spooner, for reasons never made clear, has been invited here by Hirst, As he stands, hat and coat in hand, while Hirst sits in a comfortable easy chair, he seeks to ingratiate himself into the other man’s favor; however, we never know precisely what the relationship is between these two senior citizens of like age but sharply contrasting demeanor. Hirst is an immaculately dressed, highly reputed, well-to-do poet, essayist, and critic, while Spooner is an unkempt poet who mentors younger poets but has no reputation of his own. They appear to have gone to Oxford together, and each brags of an affair he had with a woman close to the other. Lurking beneath their banter is a vein of intense rivalry, but Pinter’s writing never illuminates just how much of their memories is real and how much imaginary.What seems quite real one moment becomes questionable the next. For example, during their act two colloquy, when they recall in detail their days at Oxford, each prompting the other to a new memory, Hirst calls Spooner Charles Wetherby, a name that goes unchallenged and is never heard of again. Such ambiguities fill the pages of the script, and, while adding to the mystery of what in the world is going on, serve to increase rather than decrease interest in the play. 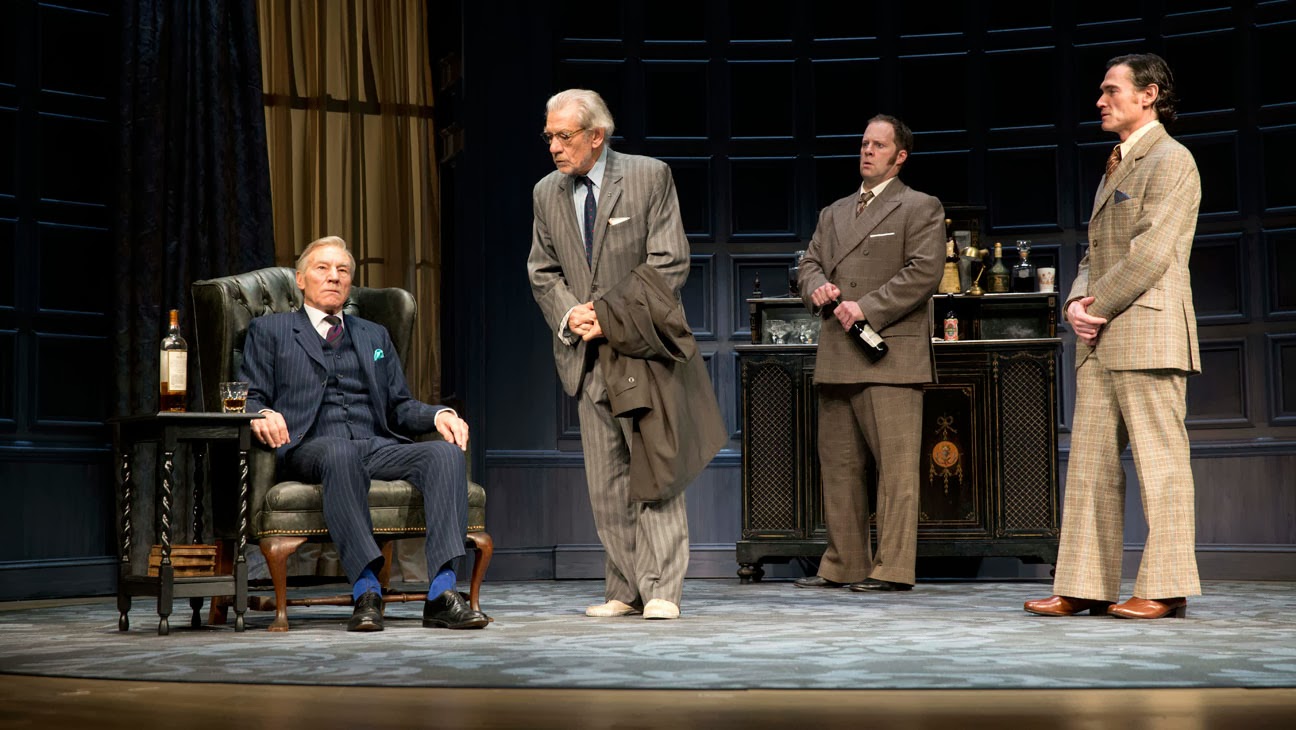 
Meanwhile, Hirst has two men in his employ, Foster (Mr. Crudup) and Briggs (Mr. Hensley), who speak and carry themselves with an air of danger, yet one can never be quite sure what their intentions are toward Spooner, who is forced to play a tense game of survival in their midst. As played here, Foster is a sleek and handsome self-described poet, while Briggs is physically imposing and slightly brutish. In contrast to the Oxford accents of Hirst and Spooner, Foster and Briggs have Cockney accents (Mr. Crudup’s sounds quite authentic, Mr. Hensley’s a bit less so). All the characters’ names are based on famous cricket players, and there’s a brief episode where Hirst and Spooner discuss cricket with terms that will seem as strange to most Americans as “strikeout,” “home run,” and “stolen base” would to a Hottentot.


There’s a plot of sorts as the evening deepens and the men drown what seem like barrels of scotch and champagne; the suspense gathers as we wonder what possible harm might be lying in wait for Spooner in this odd but tantalizingly believable environment. Some critics have been displeased with how often the production provokes laughter, claiming it distracts from the threat in the air. I had no such trouble feeling the electrically fraught atmosphere, and appreciated the humor for lightening what might have been an otherwise leaden mood. With such a small cast on a spatially large but visually spare set with only a few select pieces of furniture, each movement or pause the actors make has additional resonance. The slightest adjustment of his trousers by a sitting Mr. McKellen, or the blank reactive stare of Mr. Stewart, has the power to evoke laughter or dread. Sean Mathias’s marvelously perceptive direction helps squeeze the juice out of each pause and gesture.


And those pauses! The actors embrace them with such deep subtext that we become totally absorbed in their thought processes; time never stands still, as it might when pauses lack pregnancy, but keeps moving inexorably forward as we wait for the next move or the next word in the shifting landscape of feint and thrust. And those words! The language can be plummier than a fruit orchard, yet as coarse as any workman’s pub. I sometimes felt I was listening to a verbal symphony, with each voice a perfectly tuned instrument that rose and fell in time to the beating of a dramatic clock tempering the dynamic tensions in the script. The coarser dialogue of Briggs and Foster creates a musical counterpoint to the literary flights of Hirst and Spooner, in which extremely complex yet almost pedantically correct sentences seem the stuff of ordinary conversation, and are so well spoken that we can practically see the punctuation in our mind’s eye. Both Sir Patrick and Sir Ian offer virtuoso displays of what it is to be a great actor at the top of his game.

And Messrs. Hensley and Crudup offer the masters perfectly balanced support. Each has standout moments, such as when Mr. Hensley informs Spooner of how he first met Foster on a street corner, giving him extremely complex directions to a street he was looking for, a speech that culminates in a well-deserved laugh. Similarly, Mr. Crudup captures the stage toward the end when, after Hirst says about something that has been under discussion, "Let's close the subject for the last time," Foster proceeds to explain in minute detail exactly what the implications of Hirst's comment implies.

All the production elements cohere beautifully in this memorable revival; the sepulchral, no man's land of Stephen Brimson Lewis's mausoleum-like setting, with its dome onto which eerie images (by Zachary Borovay) of naked tree limbs are projected; Peter Kaczorowski's subtly shifting lighting, turning day into night; Mr. Lewis's accurately observed recreations of 1975 clothing, including bell-bottom trousers; and the chilling undertone of fear created by Rob Milburn and Michael Bodeen's original music and sound design, which creeps up on you before the curtain rises.
NO MAN’S LAND has been dissected by critics who have touched on its various themes, but even Pinter experts are not shy to admit that they remain cloudy about what it all adds up to. But there’s no cloudiness about the effect of this stuff in the theatre when in the proper hands. That effect, as Marcia said, is “phenomenal.”
Posted by Samuel L. Leiter at 11:38 AM