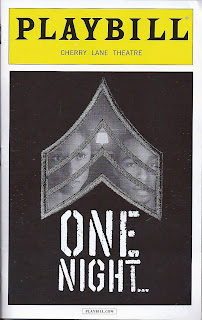 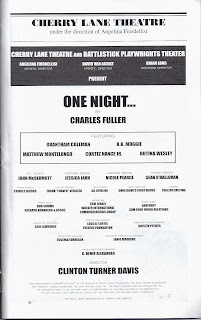 Playwright Charles Fuller won the 1982 Pulitzer Prize for A SOLDIER’S PLAY, a powerful work later made into a lauded film, which deals with a murder among black soldiers in the segregated U.S. Army of 1944, where prejudice by blacks against blacks comes in for serious consideration. Fuller, in a long-awaited return to the stage at the Cherry Lane Theatre, has penned another play about a highly provocative subject, but one much more widely reported and, despite being represented in the play by a black character, not specifically racial. This is the treatment by the American military of women who are raped by their fellow soldiers.


The victim is Alicia G. (Rutina Wesley, best known from TV’s “True Blood”), once a sergeant in charge of a convoy in Iraq, who has ended up having lost all her possessions in a fire that destroyed the shabby apartment she was living in after being shunted there from a homeless shelter. With her is Horace Lloyd (Grantham Coleman), a former corporal who has been acting as her protector since each was discharged and left "the Sandbox." He served there as a sniper, killing 26 enemy fighters. Like Alicia, Horace suffers from posttraumatic stress syndrome, indicated when he suddenly gets the willies and fuzzy images of wartime actions are projected on the walls. Those walls belong to a room in a rundown hotel just off “a highway somewhere in the United States,” whose cars, judging from the whizzing noises of Sean O’Halloran’s sound design, seem practically inside the room itself. 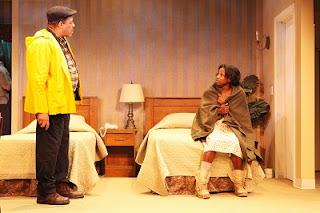 Cortez Nance, Jr. and Rutina Wesley. Photo: Sandra Coudert.
The plot, more convoluted than need be, concerns Alicia’s unsuccessful struggle to come to terms with her rape through official military channels, which are frustratingly obtuse and unhelpful; she also faces personal setbacks after leaving the military, having been rejected by her fundamentalist mother and disgusted husband, who separates her from the son she loves and whom she is devoted to one day finding again. Mr. Fuller, by trying to explore both Alicia’s post-military hardships and the travails she experiences when dealing with the army, is reduced to using numerous flashbacks. Since the only set is the motel room, characters from the past walk on from the bathroom or elsewhere in the architecturally suspect room (designed by John McDermott), and the card table downstage of the twin beds becomes, among other things, the site of Alicia’s confrontations with the military authorities handling her case: a male major (Matthew Montelongo) who doesn’t believe in women fighting alongside men and blames the victim more than her attackers, and a female captain and doctor (K.K. Moggie), who typifies the red tape of an unfeeling bureaucracy that refuses to provide a rape victim with proper redress, even in the form of disability payments. In perhaps the play's most pointed line, Alicia asks: "Why am I a hero if I die, and a nuisance if I live?"


If the playwright had found a way to focus on the rape and its aftermath he might have had a solid and convincing drama, but he creates an ambiguous relationship between Alicia and Horace, who have been living together for months despite her apparent disdain for him, with not only the trauma of having lost her husband and son weighing on her, but with the incident of the fire, which seems to have been set by either Horace or Alicia. Then there’s the potentially dangerous, pistol-packing, ex-cop of a leering motel manager, Meny (Cortez Nance, Jr.), who’s interested in pimping Alicia as part of a sleazy prostitution thing he has going on; the oddly abusive state trooper (Mr. Montelongo) who forces his way into the room on the suspicion that Alicia is a hooker; and the fire marshal (Mr. Montelongo, again) who comes to interrogate Alicia. Add to this the shakes to which Alicia and Horace are subject, the clear-as-day conversations between prostitutes and johns heard from the room next door, and the subject of Horace's redemption, and you have too many eggs in Mr. Fuller’s playwriting basket.


Saving the play to some degree from its messiness are the fine performances of all the actors, although why Mr. Montelongo could not find some way to physically alter his very noticeable features, including a rather substantial mustache, is a question director Clinton Turner Davis should be asked. Saving money on actors is one thing, but casting someone in a generally naturalistic play (even with the flashbacks) who looks exactly the same no matter which role he plays is not very wise. Nor is the director’s choice of having scenes conveying crucial information take place at full volume a few feet downstage of where Alicia has supposedly just fallen asleep (if only we all had that ability), or of having cell phone conversations that others in the same small room can’t hear. Partly, this has to be the director’s fault, partly that of the design, and partly that of the playwright for thinking such situations would be acceptable. Theatrical convention in a play like this one can go only so far before the sign starts flashing: “implausible.”


The subjects of rape in the military and PTSD deserve better than this dark, depressing effort. ONE NIGHT . . . , which runs an hour and 45 minutes, without an intermission, has its heart in the right place, but it is too distracted by peripheral issues and red herrings. Hopefully, the play’s principal issues will be looked at by someone else in a more focused, less melodramatic fashion, with results that will lead to many nights of effective theatre.