167. A MIND-BENDING EVENING OF BECKETT 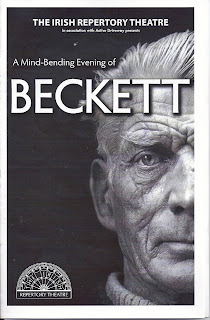 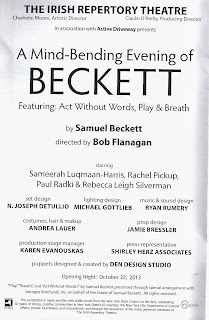 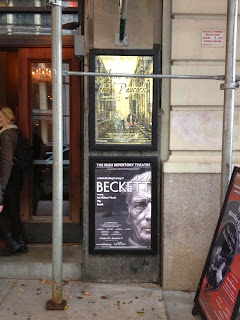 
Samuel Beckett is ubiquitous in New York at the moment, with WAITING FOR GODOT and ALL THAT FALL receiving star-studded productions featuring four of England’s leading actors (and let's not forget the recent Yiddish GODOT), while lesser-known artists are giving their all in the tiny basement theatre of the Irish Repertory Theatre in this bill of three one-acts directed with care by Bob Flanagan. 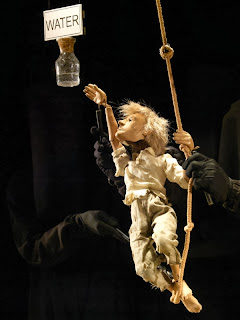 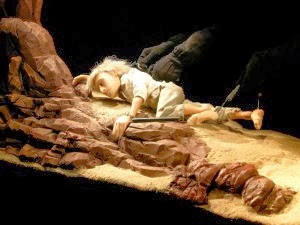 
The program opens with ACT WITHOUT WORDS, originally written in French as a mime and here produced with a puppet in the single role. Beckett was fanatically strict about any alterations to his works, like having an all-female staging of WAITING FOR GODOT, so it’s impossible to know how he would have felt about seeing something written for a human being played by a puppet. All we can do is admire the fact that the staging follows his very precise instructions about how a nameless man is tossed onto a desert and subsequently struggles to survive as, timed to the sound of an offstage (and symbolically fraught) whistle, various objects are mysteriously flown on and off—a palm tree, three different sized cubes, a pair of scissors, a length of rope, and, most tantalizingly, a flask of water. Every  Sisyphean effort he makes to reach the water using the other props is frustrated, as is his attempt to kill himself. Finally, the man just stays there, doing nothing, as nothing can be done.


ACT WITHOUT WORDS, like every Beckett work, has been subject to numerous critical interpretations; by having it performed by a puppet, even more speculation as to its meaning is invited. Ultimately, it conjures up images of man’s hopelessness, despair, and the futility of existence, while at the same time suggesting, as so often in Beckett, that we must go on, regardless. Using a puppet makes even sharper the notion that man is the plaything of destiny.

The puppetry is borrowed directly from Japan’s bunraku theatre, where each puppet is manipulated by three puppeteers, often (but not always), as here, dressed and hooded in black. One man operates the feet, one the left arm, and one the head and right arm. The Beckett puppet has carefully articulated joints that allow it to walk and move fairly fluidly, even at its ankles, but it is much smaller than a bunraku puppet and neither its fingers nor face are capable of movement, as they are for bunraku’s leading characters. The puppeteers beautifully maneuver their puppet and his props, but one wonders nonetheless whether the playwright would have approved. Then again, since French mimes typically show no facial emotion, a puppet’s affect would not be far removed from that of a living performer, and, possibly, because of our tendency to read into a puppet as much meaning as we can, even more touching.


BREATH, which takes longer to set up than to perform, was originally given in the infamous erotic revue, OH! CALCUTTA! (1969), where its presentation made Beckett furious with the show’s conceiver, Kenneth Tynan, for adding nude bodies where none was called for. Tynan, for his part, argued that the decision was out of his hands and that he had nothing to do with it. Beckett asks that it be 25 seconds in length. We see a dumping ground for trash, hear a baby’s birth-cry, hear intensified breathing, hear another cry, and curtain. We are born. We die. Are we little more than trash?


After a longish intermission comes the pièce de résistance, PLAY, the minimalist piece in which three dead people are encased in burial urns, only their crud-encrusted faces showing; one is designated as M and the others as W1 and W2, i.e., Man (Paul Radki), Woman 1 (Sameerah Luqmaan-Harris), and Woman 2 (Rachel Pickup). Each is covered with the same kind of gook as is on the urns. They speak their lines at an extremely rapid pace but only when a light, seen by critics as an interrogating force, hits their face. The timing of the light and their speeches is always a challenging technical feat for actors in this piece, and Beckett worked very hard to find the right method of producing the effect. In life, W1 was married to the man and W2 involved in an affair with him, a situation they go over and over, often so quickly as to be unintelligible. They don’t speak to one another, only straight out, as if this is a continuing monologue they must repeat forever in their eternal hell. There’s nothing unique in the specifics of the affair, and the characters are anonymous, Beckett’s aim seeming to be more about the musical and visual effect of the piece than its emotional impact, although some (not I [the name, btw, of another Beckett piece]) find it moving. Some have compared it to a fugue. Again, numerous interpretations have been offered. 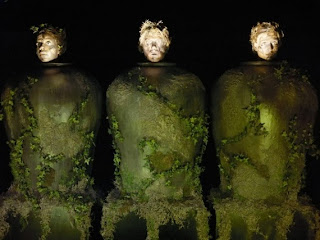 
Each actor has mastered the technical requirements of speaking their lines as rapidly as humanly possible, and with clarity and precision, which still doesn’t make the piece any more comprehensible on first viewing. WAITING FOR GODOT is a paragon of accessibility by comparison with PLAY, and tired or bored spectators may take advantage for their own purposes of the extreme darkness into which the audience is plunged for the work’s duration. Others may be hypnotized.


The sets for A MIND-BENDING EVENING OF BECKETT are by N. Joseph DeTullio, the costumes (the black garments worn by the puppeteers?) by Andrea Lauer, the effective lighting by Michael Gottlieb, the eerie music and sound design by Ryan Rumery, and the puppet by Den Design Studio. All contribute to a worthwhile introduction, perhaps even a mind-bending one, to these examples of Beckett's minor work.
Posted by Samuel L. Leiter at 7:35 PM