170. THE COMMONS OF PENSACOLA 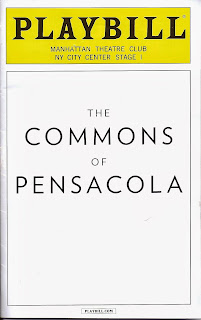 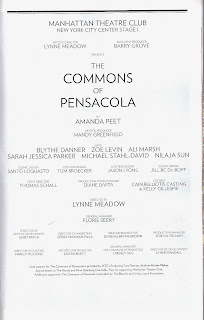 The Bernie Madoff scandal has proved rich pickings for writers in search of a juicily dramatic subject. A couple of years ago the small screen witnessed a season of the Glenn Close series “Damages” based on the story, with Lily Tomlin playing the wife of the Madoff-inspired swindler, while, more recently, Woody Allen’s movie, Blue Jasmine, cast Alec Baldwin as the crook and Cate Blanchett as his hard-hit spouse. This season alone has seen two plays on the New York stage that would not exist without Madoff, THE UNAVOIDABLE DISAPPEARANCE OF TOM DURNIN, starring David Morse as the Madoff avatar; the play lacked a wife figure to interrogate about the questions everybody still wants to ask: did Ruth Madoff know, or even suspect, that her spouse was scamming his clients out of their life savings? Was she blindsided? And did Madoff stash money away for her in case he was found out and sent away? “Damages” alluded to these problems, and they are front and center in THE COMMONS OF PENSACOLA, the engrossing new play at the Manhattan Theatre Club’s City Center Stage 1 that introduces actress Amanda Peet to the front ranks of promising playwrights. 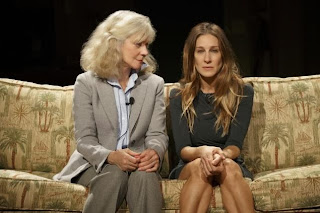 
Ms. Peet’s play, of course, doesn’t use the Madoff name, and the family dynamics are obviously not the same, but the situation is close enough to our fantasies of what might have occurred once the bastard was caught and imprisoned to lend what happens a veneer of truth. There surely will be other plays, movies, and TV shows that will examine the dramaturgic possibilities present in the story, but for now New Yorkers can spend an intermissionless hour and a half at a nicely turned dramedy starring the vibrant Blythe Danner. Ms. Danner plays the 71-year-old Judith, a Mrs. Madoff-like character (including her Jewishness) trying to stay out of the limelight by living in a one-bedroom condo with an ocean view in Pensacola, Florida. Costarring is the fine Sarah Jessica Parker, portraying Becca, Judith’s down-on-her-luck, actress daughter. 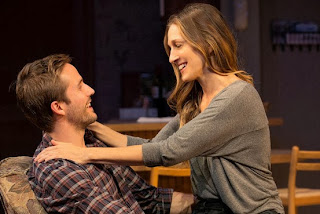 
The 43-year-old Becca arrives for Thanksgiving at the condo with her 29-year-old boyfriend, Gabe (Michael Stahl-David), who calls himself a “guerilla journalist.” Judith asks if that has something to do with Jane Goodall, one of a number of such one-offs, including an Alzheimer's joke, intended to provide a comic undertone for an ultimately dramatic piece about a onetime livewire and big spender reduced to living in a small Pensacola retirement apartment. Neither this, nor her having a maid-assistant, is necessarily within the financial restraints that have been put on her, and the play’s revelation of just how she can afford these things becomes a major fulcrum for what follows. Becca is there not only for the holiday: Gabe, we quickly learn, wants to make a “docu-series” about Judith, which he explains to his skeptical would-be subject is not to be confused with a reality show. I won’t say how she responds, but will note that questions are raised about Gabe’s integrity. Complicating matters is the arrival for Thanksgiving of Lizzy (Zoe Levin), the beautiful young daughter of Becca’s sister, Ali (Ali Marsh). Judith, meanwhile, has so many ailments that Lorena (Nilaja Sun), the Jamaican-accented maid, has to oversee her pill regimen (13 pills four times a day). When Judith faints and is hospitalized, her daughter, Ali, Lizzie's mother, flies down from New York but when it turns out that Judith is not in any danger (her Zanex caused her to faint), Ali begins to rage about having come for nothing on behalf of a mother she's sure knew all along what her husband was doing; angrily, she begins to search for the money she's convinced is hidden somewhere. Fireworks soon explode as sister confronts sister, and children face off against their mother. As the complications and revelations intensified, one lady down front couldn't resist saying, "Oy, oy, oy!" which drew a big laugh.


From the light banter of the opening scenes to the dramatic confrontations of the later ones is a gradual but theatrically satisfying journey. There is intelligent dialogue, believable characters, reasonably credible exposition, a smattering of scatological humor (farting, if you must know), some vividly rough language (Lizzie hates the word "vagina" and prefers "pussy"), and thoughtful content about greed, accountability, truth, deception, integrity, and family love. At one point Becca has a major ethical choice regarding a lot of money. I suspect that post-play conversations will often ask “what would you do if you were in her situation?”

Ms. Peet doesn’t always manage to fully justify the exits of her characters so that the stage can be occupied convincingly (and at length) by others whose dialogue must be kept private; this is a common difficulty in writing interior scenes using multiple characters with secrets but it has to be overcome so it seems less contrived. Also a bit forced is the tropical storm that cuts the power to the condo, leaving Gabe and Lizzie alone, and a sliding door that no one can open seems fraught with unnecessary symbolism. Finally, the closing scene seems inorganic and somewhat nebulous.


The play is vigorously performed, with Ms. Danner and Ms. Parker at their best. The still glamorous Ms. Danner gets to play a woman with many colors, and she brings humor, fire, and spice to her portrayal. Ms. Parker’s Becca is a vulnerable creature who can be all charm and good spirits one moment, and the next seriously conflicted and angry. Her svelte figure and trademark hairstyle are intact, and, at the end, she wears a dress (designed by Tom Broecker) straight off the back of “Sex and the City’s” Carrie Bradshaw. But while the characters look alike, there’s far more angst and desperation in Becca.


The supporting cast is universally excellent and convincing, from Zoe Levin’s smut-mouthed Lizzy, to Nilaja Sun’s smart-mouthed Lorena, to Michael Stahl-David’s veracity-challenged Gabe, to Ali Marsh’s defiantly suspicious Ali. They work skillfully under Lynne Meadow’s always perceptive staging on Santo Loquasto’s thoroughly lifelike replication of a sunbelt condo. Jill BC Du Boff offers smart music choices in the scene shifts, and Jason Lyons’s lighting is just right, especially a transitional sequence before the last scene that conveys the passing of time as the shadows of the vertical blinds move slowly across the stage in keeping with the progress of the sun.


There's nothing common about THE COMMONS OF PENSACOLA. The next time I see Amanda Peet on the stage or screen, she’ll have earned a new level of respect from many theatergoers, including me.
Posted by Samuel L. Leiter at 8:16 AM