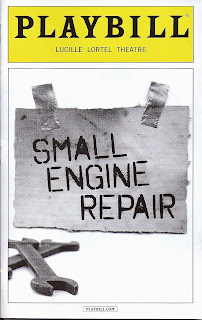 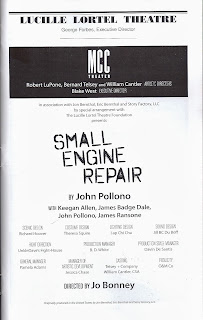 Very few plays have annoyed me lately as much as John Pollono’s SMALL ENGINE REPAIR, at the Lucille Lortel Theatre. The two best things about it are its set and its hour and 10-minute length. I realize I’m again in the minority (although not alone), with various critics weighing in on how savvy and funny the play is. When I saw it,  the audience gave the actors a very warm reception while I was slinking up the aisle to escape into the fresh night air where I could breathe again; during the performance, though, I couldn’t resist shaking my head at its inanity, lack of credibility, and overly broad performances. When the audience laughed, I cringed.


The play is set in the town of Manchester, New Hampshire, which the locals snarkily call Manch-Vegas because it so lacks any of Las Vegas’s glitz. All the action transpires in Richard Hoover’s excellent creation of a strikingly detailed small engine repair shop belonging to the grease-stained Frank, portrayed by the play’s author. Frank enters considerably before the house lights go down to clean the shop in preparation for the arrival of two childhood friends.These are Packie (James Ransone), a smallish guy proud of his Irish heritage, and Swaino (James Badge Dale), a braggart womanizer who preys on much younger women. Frank, Packie, and Swaino, who grew up together, are working class chumps in their mid-30s, extremely foul of mouth and given to extremes of irritatingly immature attitudes and behavior. Packie and Swaino are bachelors, but Frank has a 17-year-old daughter, Crystal, the light of his life; her childhood face beams from a shop poster dominating the set. The guys haven’t seen one another much in recent years, and there are petty tensions among them, but Frank has gotten them together for a purpose that only slowly comes into focus. 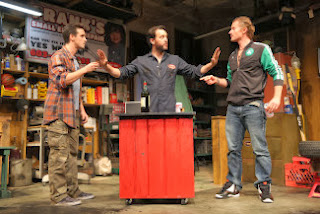 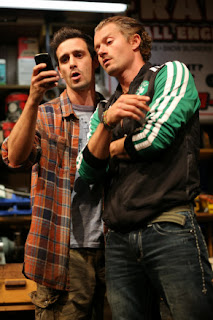 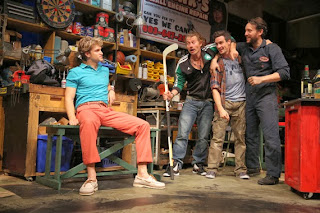 Frank, Packie, and Swaino are largely uneducated (Swaino did a year of college), even though they sometimes express themselves in ways that belie their presumed ignorance. Packie is into social media in a big way, while Swaino thinks having a Blackberry Storm is the height of cool. The pervasiveness of social media and the Internet gradually become an underlying satirical subject of the play, but the situation Mr. Pollono creates to embody his theme is so heavy handed and his characters so exaggerated, that it's impossible to accept anything happening on the stage as true. Structurally, the play has all kinds of problems: for example, when someone needs to be offstage so the others can have the space to themselves, he simply says “I have to pee,” and exits. This obvious device is actually used three times.


Once the trio of pot-smoking, scotch-guzzling, filth-talking buds has been introduced, there enters Chad (Keegan Allen), a handsome, blonde 19-year-old frat boy whose Brooks Brothers duds make him look like someone from the moon in this caveman setting. SMALL ENGINE REPAIR aims to stress the class differences between the wealthy Chad, whose father is a powerful Boston lawyer, and the dead-end, working-class world of the three roughnecks, but, under Jo Bonney's direction, it’s far too in-your-face and overplayed. Chad’s the ostensible reason Frank has gathered his friends, as he’s there to sell them Ecstasy. But we soon learn Chad has done something involving Crystal that's the actual reason for Frank’s having arranged the reunion, and the threat of something very gruesome comes into play. I’ll refrain from offering the spoiler, but I can’t refrain from thinking Frank’s behavior and how his friends respond to it, is ridiculous, whatever its dramaturgical or satirical purpose. David Mamet and Neil LaBute: what have you wrought?


There are many potentially interesting ideas in SMALL ENGINE REPAIR but they are buried in overkill and tastelessness. When the friends, who’ve nearly been hoist by their own petard, come up with a way out of the dilemma they’ve gotten themselves into, they do so on a level of crassness and implausibility that had me nearly running for the street. SMALL ENGINE REPAIR needs a complete overhaul before it can run smoothly.
Posted by Samuel L. Leiter at 8:05 AM