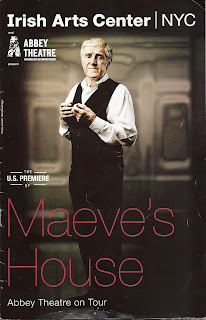 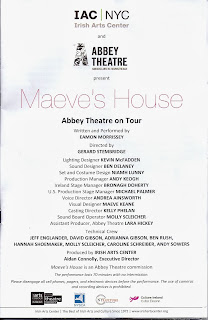 Maeve Brennan (1917-1993) was an Irish short story writer who, as a child, lived in a house at 48 Cherryfield Avenue, Ranelagh, Dublin, before moving with her parents to Washington, D.C., where her father served as the Republic of Ireland’s first ambassador to the United States. She eventually moved to New York, and was employed at Harper’s Bazaar and then at the New Yorker, where she had a “Talk of the Town” column signed “The Long-Winded Lady.”  Before long, she gained fame for her short story writing about both Ireland and America. She was also a memorably beautiful and glamorous redhead, as attested to by the photos of her one can easily find online. She even has been considered one of the possible influences on the character of Holly Golightly in Truman Capote’s BREAKFAST AT TIFFANY’s. In her later years, she declined into alcoholism and poverty, becoming a virtual bag lady and dying in a Bronxville nursing home at 76. 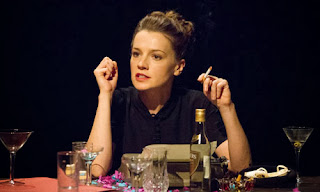 Maeve Brennan.
Eamon Morrissey is a veteran Irish actor, long a member of Dublin’s world-famed Abbey Theatre, where he has performed in over 100 productions and where three one-man shows he wrote and starred in were performed. As a young actor, he was performing on Broadway in Brian Friel’s 1964 play Philadelphia, Here I Come! when he managed to meet Brennan, a favorite writer of his mother’s, when they got together at the Russian Tea Room. The glue that bound them was that, purely by chance, the house in which she had lived as a girl, at 48 Cherryfield Avenue, was the house in which he grew up, and which was carefully limned in some of her vividly evocative writing.


In MAEVE’S HOUSE, Mr. Morrissey, a marvelously adept and affable white-haired presence with a beautifully modulated brogue, mellifluous voice, and precisely articulated diction, has composed a love letter to the person and writing of Maeve Brennan. He holds the tiny stage at the Irish Arts Center for 70 intermissionless minutes as he recounts how he came to meet Brennan, weaving into his narrative both snippets of her writing and his responses to them, sometimes so seamlessly that there is a blurring of the boundaries between his private thoughts and the images recounted in Brennan’s stories. Throughout he maintains a warm and friendly persona, greatly aided, of course, by the unsentimental quality of Brennan’s depictions of people and places, and by the colorfully articulated language she puts in her characters’ mouths. Her people are not at all cheerful, and usually seem in one way or the other unhappy or dejected.


MAEVE'S HOUSE, more an affectionate memoir than a play with a dramatic arc, only hints at the main points in Maeve Brennan’s intriguing biography; it would seem a one-woman play about her might have even greater potential interest than reflections on her by an aging male actor, no matter how gifted. The approach holds her at an admirer’s arm’s length, when such an abundantly rich source of dramatic material deserves a more immediate presentation by a charismatic actress capable of embodying Brennan in the flesh.


Mr. Morrissey’s paean to this muse is staged on a spare set (designed by Niamh Lunny) with nothing more than the kind of wooden bench one sees in New York subway stations; at the rear is a screen on which a few images, one showing an abstract skyline of New York, are projected. Wearing a gray tweed jacket, tan slacks, black cardigan, and white shirt, Mr. Morrissey sits, stands, or moves as the material requires, Kevin McFadden’s barebones but sensitive light design changing to accommodate mood and imagined setting. There is nothing elaborate in Gerald Stembridge’s carefully modulated staging, just a simple storyteller and his story. Still, when the performance ends you may want to go home and order a copy of Maeve Brennan’s writings and see for yourself why this nearly forgotten Irish voice needs once more to be heard.