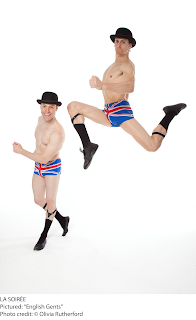 While Cirque du Soleil (which is returning to Citi Field in March) always gets everyone’s attention with its spectacofantastical productions in giganticoenormous venues, there’s another, much more intimate and far raunchier brand of eye-poppalooza circus/cabaret/vaudeville/burlesque show that
seems to crop up annually in our local entertainment environs. Last year it was the latest edition of SPIEGELWORLD, staged in a tent in the Broadway district; this year it’s LA SOIRÉE, a blend of broad comedy, acrobatics, juggling, prop-swallowing, and song with an array of eight headline acts that puts you up close and personal to men with more muscles than Michael Bloomberg has dollars, a naked woman who makes a vanishing red hankie reappear out of her girly parts, and, among others, a Freddie Mercury look-alike who gets passed overhead throughout the theatre as everyone sings “We Are the Champions.”


LA SOIRÉE, which has been done (not necessarily with the same lineup of acts) in a number of major European cities, has taken over the Union Square Theatre on E. 17th Street, a few steps east of Park Avenue South, and converted it into a red velvet-draped arena surrounding a circular stage about a six or seven feet in diameter, just like the one in SPIEGELWORLD. The stage is the heart of most of the show, but the top of a piano, placed on a raised level, also serves as a frequent platform, just as does the auditorium itself. That’s when the audience gets in the act as performers cruise the aisles to engage playfully with selected playgoers; in one memorable routine, a man is pulled on stage by a talented Canadian comedienne named Mooky Cornish to be her partner in her so-called dramatic debut. As she moves him around while speaking her lines, he reads his responses from the various places on her person to which they’ve been pasted, including her tongue. Her contortions, designed to direct his attention to the words, are uproarious, but when the two of them follow this by lip-synching “Tonight” from WEST SIDE STORY as she stage manages their movement, it brings down the house. 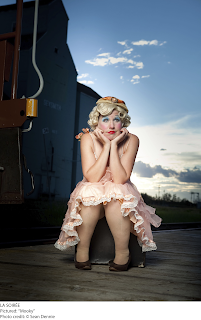 Aside from the opening act involving two powerful balancing artists, the English Gents, all the acts are solos. The English Gents (Denis Lock and Hamish McCann) appear as veddy, veddy British umbrella-carrying clubmen in bowlers and pinstriped suits, and then begin one of those startling displays of strength and balance that make you realize how physically deficient you really are. Of course, they don’t keep those suits and hats on for long, and pretty soon they’re down to jockey shorts emblazoned with the Union Jack. Later in the show, Mr. McCann, beginning with a snatch of “Singing in the Rain,” shows what can be done with nothing more than a street lamp pole.


And now, ladies (and gents with a taste for this sort of thing), let me introduce you to another specimen of male physical perfection, Stephen “Bath Boy” Williams, an Aussie who enters a water-filled porcelain bathtub with gold claw feet, and then, shirtless and wearing a pair of tight jeans clinging wetly to his legs, grabs a pair of hanging straps and does an awesome series of aerial maneuvers as he wraps them around his wrists, legs, or wherever, ascending and descending in patterns that make you fear for his safety, especially when he drops precipitously toward the tub, head down. Throughout, he spouts water like a humpback whale, the droplets highlighted by the dramatic lighting. So much water is splashed around that the entire first row (where I was sitting) was given a plastic cover for protection, but my wife still managed to get her pretty face splattered. 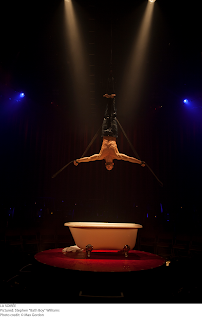 The promo material for the show notes that the lineup of acts will change (no program is provided). The Freddie Mercury impersonator is a slim, long-haired guy in skintight leather jeans, tiny leather jacket with a big “M” emblazoned on the back, a leather motorcycle cap, and a painted-on Fu Manchu mustache, who calls himself Mario, Queen of the Circus (he’s actually a guy from New Jersey). He has an arsenal of off-color jokes, many about his sexual conquests, but his pièce de résistance is an astonishing juggling act with silver balls done in choreographic precision to his lip-synched rendition of a Queen song. 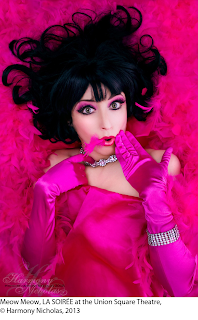 Miss Behave is a devilish, horn-wearing clown; she dresses in a sexy red vinyl dress emphasizing a substantial derriere, and she clearly likes to swallow, although what she swallows—like a pair of shears and a metal bar stool leg—would make you gag. She also has a pierced tongue through which she inserts the stem of an artificial flower and, well, you’ll either want to see for yourself or will hide your eyes.


Ursula Martinez, billed as hailing "from Spain via Croyden," is a tall, svelte blonde who does two acts. In the second she dresses in a flamenco costume and gives us a dirty language lesson in Spanish while also singing in both Spanish and perfect English. In her first, she appears in a tight, gray business suit—jacket and skirt—and then, as she mugs comically, makes a tiny red handkerchief keep disappearing. Trying to find it, she takes off one garment after the other, eventually becoming completely starkers, except for her high heels. She moves from the piano top to down center, or at least down center from where I was seated, and completes her act—as noted earlier—by retrieving the naughty hankie from the vicinity of where the sun don’t shine. I was only several feet away and I couldn’t see how she did it—and believe me, I was looking very closely!


LA SOIRÉE is a fast-moving show with absolutely no theme (unlike CIRQUE DU SOLEIL) and capable of keeping you engrossed, I’m sure, even if the acts are not the same as the ones I saw. Several of those on view have already been seen in similar New York shows; I remember Ursula Martinez from last year’s SPIEGELWORLD, and friends told me they recognized other acts from similar presentations. The music is very loud (especially during the preshow activities), the fun is raucous, the atmosphere is uninhibited (the audience is encouraged to whoop and holler), the humor is bawdy, and you can heighten your reactions by patronizing a bar serving beer and wine; if you check your brains at the door and let them entertain you, you’ll have a real good time.