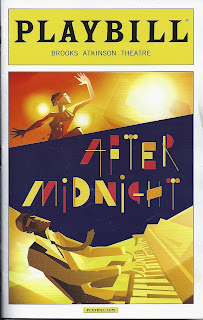 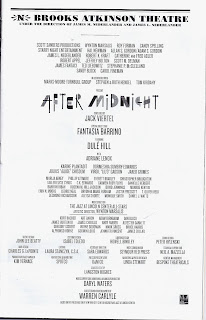 If your tastes run to theatrical filet mignon, I advise DOMESTICATED at Lincoln Center or the Shakespeare plays in rep at the Belasco, but if what you’re looking for is the indulgence of a hot fudge sundae, with all the works, you could do worse than swinging on over to the Brooks Atkinson for AFTER MIDNIGHT, an hour and a half revue providing uninterrupted musical whipped cream. The show, developed from an earlier work called COTTON CLUB PARADE, seen in the City Center Encores! Series, is getting the full Broadway treatment. 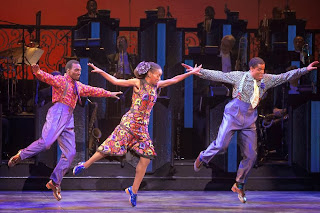 
AFTER MIDNIGHT has a very simple concept. It intends to recapture the kind of singing and dancing entertainment once associated with Harlem’s legendary Cotton Club, a nightclub whose entertainers were black and its audience white. But the show completely avoids any such historical/racial context, preferring instead to tie all the acts together with some poetic bits and pieces from Langston Hughes delivered by Dulé Hill as a smooth MC who also sings and dances. If you recall him from TV’s “The West Wing,” you’ll be happy to know that he has decent musical theatre skills, although he gets to use them only sporadically here. 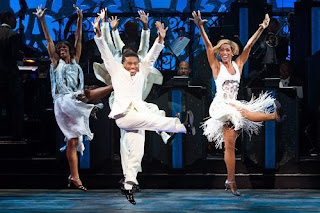 Center: Virgil "Lil'O" Gadson; right: Karine Plantadit. Photo: Matthew Murphy.
The show is little more than a succession of acts, any one of which could easily be moved around from one slot to the other, with the music selected from the songs of Duke Ellington, Ted Koehler and Harold Arlen, Sippie Wallace, Dorothy Fields and Jimmy McHugh, Cab Calloway, and others, with the majority coming from the great Mr. Ellington. The Jazz at Lincoln Center All Stars, a 16-piece orchestra, sits upstage on a sliding platform while the acts are performed in front of it. An act comes on, finishes, walks off as the lights dim, and another act comes on as the lights come up. Continuity is provided by the Cotton Club aura, not by any narrative thread. So there’s not much to chew on, but there’s plenty of singing and dancing to ingest.


Headlining the show is “American Idol” winner Fantasia Barrino, who already has earned Broadway laurels for THE COLOR PURPLE; she has the audience in the palm of her hands whenever she appears, singing  such standards as “I Can’t Give You Anything But Love,” “Stormy Weather,” “Zaz Zuh Zaz,” and “On the Sunny Side of the Street.” Ms. Barrino has great stage presence, knows how to relish a lyric, has a terrific voice, and moves with sensual authority. She’s scheduled to remain in the show for several months, after which she’ll be replaced by k.d. lang (in an all-black revue?), and then Toni Braxton and Babyface, with others to follow down the line.


Among the featured players making a big impression are Adriane Lenox, singing “Women Be Wise” and “Go Back Where You Stayed Last Night”; dancer Karine Plantadit in several numbers, especially “Black and Tan Fantasy”; and Dormeshia Sumbry-Edwards doing “The Skrontch,” “Raisin’ the Rent” and “Get Yourself a New Broom.” Two male dancers, the diminutive terpsichorean acrobat Virgil “Lil’o” Gadson, and the unforgettably loose-limbed, double-jointed Julius “iGlide” Chisholm, are sensational, both singly and when paired, while Jared Grimes earns his niche on the roster of great tap dancers. A sizable ensemble of gifted performers helps fill out many of the acts, and gives the audience a rousing send-off in the final number, when the entire company appears.


But as many others have noted, despite the array of talented singers and dancers, the performers who make the event truly memorable are the members of the Jazz at Lincoln Center All Star, an orchestra of woodwinds, trumpets, trombones, tuba, piano, guitar, bass, and drums that is simply fantastic; when the show has seemingly ended, and the curtain calls are over, their  platform stage glides forward for a mini-concert that lifts you out of the theatre with music in your heart.


John Lee Beatty’s relatively simple set is a series of false prosceniums to which appropriate elements are added as necessary, and Howell Binkley’s lights do a great job of creating the colorful revue atmosphere. Isabel Toledo’s costumes are knockouts, recreating old Harlem’s nightclub world, from the women’s sequined gowns to the men’s tails and top hats.


As I’ve said, there’s not much food for thought in AFTER MIDNIGHT, but if music be the food of love, play on.