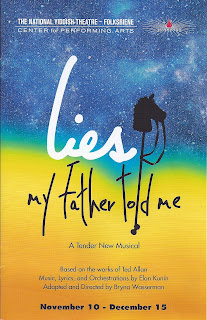 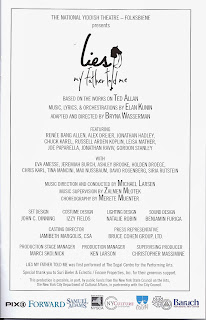 LIES MY FATHER TOLD ME, another musical based on a movie, has come to town, this one at the Baruch Performing Arts Center, where it is being produced by the venerable National Yiddish Theatre—Folksbiene company. In celebration of the troupe’s 99th season, a remarkable record to which no other New York troupe comes close, it has lavished its resources on what it touts as one of its most elaborate productions, a 17-actor musicalization of Jan Kadar’s Academy Award-nominated1975 Canadian movie about a Jewish boy’s coming of age in 1920s Montreal, based on the writings of Ted Allan. It had its world premiere in Montreal in 2010; this is its first New York showing. 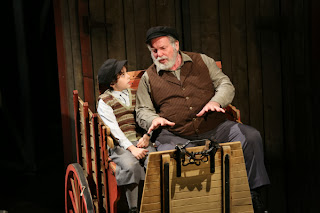 
The two-hour 15-minute show, apart from a few familiar Yiddish words, is in English, like most Folksbiene productions these days. If you weren’t aware of the story’s background, you might think when it begins that it’s set among the immigrant population of New York’s Lower East Side. John C. Dinning’s impressive set shows a stable at stage right and a large structure at the left that revolves to show the exterior or interior of the house in which young David (Alex Dreier) and his family live. The family consists of Danny’s adoring, gentle mother, Annie (Russell Arden Koplin), his get-rich-quick schemer of a father, Harry (Jonathan Raviv), and his Tevye-like grandpa, called by the Yiddish term “Zaida” (Chuck Karel). There’s also Uncle Benny (Jonathan Hadley), ready to partner Harry’s ideas, but quick to separate himself when things go wrong. Neighborhood characters include the flinty Irishwoman Mrs. Tanner (Renée Bang Allen), always complaining about the filth produced by Zaida’s old nag, Ferdeleh; Edna (Leisa Mather), the local heart-of-gold prostitute; and Mr. Baumgarten (Gordon Stanley), the Marxist tailor who debates Marxism versus religion with Zaida in a song called “Politics”: Zaida keeps waiting for the messiah but Baumgarten insists the messiah is the working class.


The central plot, such as it is, concerns the seven-year-old David and his relationship with his beloved 70-year-old Zaida, whom he often accompanies on the old man’s horse-drawn cart (the horse is imagined) as he goes around the ghetto selling junk (and singing “Rags, Clothes, Bottles”) and telling David fantastical stories, imagining (in “Magic Wings”) that the nag has wings that help to fly them to China and other exotic places. Harry’s latest scheme is the invention of creaseless trousers, for which, as usual, he must borrow money from the skeptical Zaida, and which, also as usual, turns out to be a flop. The secular Harry’s rejection of Zaida’s religious beliefs (he calls the old man a “religious hypocrite” when Zaida resists his borrowing demands) is another plot spur, as is the boy’s love for Ferdeleh, which is on its last legs. One of the most uncomfortable sequences comes when David grows jealous of his mother’s breastfeeding her new arrival, and demands to be given the same treat, a notion of which the embarrassed Zaida must disabuse him. Narrating the story, which is basically a string of incidents, is the grown-up David (Joe Paparella), who observes the action he’s describing and occasionally expresses himself in song. A driving force behind David’s revelations is his need to confront his anger toward his father, a man who could never take criticism, called everyone an idiot, had a gambling problem, was physically abusive, and had trouble with the truth. But David's ire is never resolved. Despite Zaida’s teaching young David to honor his father, regardless of what he does, older David is never able to do so, which gives the show’s hopefully sentimental qualities a sour edge, as seen in the unforgiving title.


Elan Kunin's music, lyrics, and orchestration have something of the right ethnic and period quality, but never rise much beyond the conventional.The direction of Bryna Wasserman, who adapted the film script, is mechanical; her choice of having characters pet the invisible horse seems awkward in this otherwise literal-looking environment, where we already may feel the horse's absence too sharply. And either insufficient rehearsal or directorial inattention was responsible for the slack scene transitions when I saw the show. Merete Muenter is responsible for the familiar, if jaunty, choreography. And Izzy Fields's costumes evoke the period. The actors do their best, especially Chuck Karel as the deep-voiced (if sometimes flat) Zaida, the promising child actor Alex Dreier as young David, Jonathan Raviv as the unpleasant Harry, and Russell Arden Koplin (who sings nicely the sweet ballad, “Maybe Someday”) as the long-suffering mother. The ensemble also includes a handful of sprightly kids.


By and large, LIES MY FATHER TOLD ME struggles from a general lack of spontaneity, and the show often lies there, like unleavened bread. It’s too bad there are no Passover scenes.