154. WITNESSED BY THE WORLD 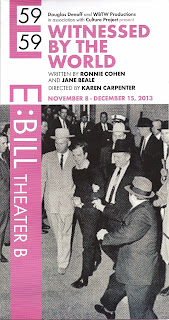 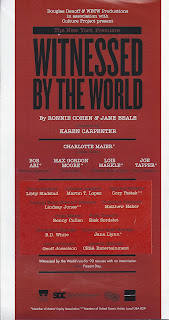 Seeing this play about JFK’s assassination on November 22, 2013, the 50th anniversary of that tragic event, was the only thing about it that had any meaningful dramatic value. In WITNESSED BY THE WORLD, Ronnie Cohen and Jean Beale have written a play set in the present day that dramatizes the possibility that Jack Ruby, the gangster-connected nightclub owner who killed Lee Harvey Oswald, did it on behalf of his Mafia associates. What a revelation! Of course, the fact that Ruby’s Mafia links were thoroughly investigated on multiple occasions, and not only by the Warren Commission, and were determined not to have relevance in his killing of Oswald is neglected in the dramatists’ rush to judgment on his motives. As far as their lead character, investigative reporter Joan Ross (Charlotte Maier), is concerned, the Warren Commission "is absolute horseshit. Turns out some of those commission guys weren't the most persnickety." The Rockefeller Panel, the Freedom of Information Act? "All smoke screens." The fact that the files have not been opened this year as promised clearly means that something is being hidden. Whether or not that has any truth, however, is not so much the issue as that she is convinced the secret lies with Ruby's sister.


The play, running at 59E59, begins with Joan finishing up an interview with a young screenwriter, Ira Basil (Max Gordon Moore), about his and his producer brother's charity work; within seconds of learning that Ira's working on a new script about the Mafia, she gets him to agree to collaborate with her on a screenplay focusing on her pet theory about Ruby’s part in the Kennedy assassination plot. Soon, she and Ira are mapping their screenplay out on a chalkboard, although Ira and his brother (not seen) aren't interested in another movie about the assassination but rather want to do one about Ruby’s life before it. Why anyone would want to see such a film is never discussed; Joan, frustrated by this decision, nevertheless follows her goal of sleuthing what happened by locating and interviewing Ruby’s reclusive sister, Eileen Kaminsky (Lois Markle), who, if she were still alive, would now be 96-years-old; Ms. Markle, a respected veteran, may be of a certain age, but there’s no way the character she plays is anywhere near being a centenarian; nor, as depicted, is she the least bit credible to Joan's conspiracy theory. Meanwhile, mirabile dictu, Joan’s gambling buddy, Aaron Spencer, has gotten into trouble with the Mafia and, as it happens, Joe Capano (Joe Tapper), the hoodlum who is forcing him to do some money laundering for the mob, works for Uncle Tony, a shadowy figure who somehow was involved in what went down in Dallas. Eileen (whose 1964 testimony can be read at http://jfkassassination.net/russ/testimony/kaminsky.htm) is reluctant to speak to Joan at first, but the sly reporter rather quickly becomes her close friend and Eileen, without prompting, gives Joan a cigar box with various Ruby artifacts, including a bank key. Joan believes she’s onto something huge here and hires a private eye to find the lock that fits the key. Meanwhile, with Aaron in tow, Joan attends a film industry gala honoring Ira for his charitable work, when . . . I’ll omit the spoiler in case anyone is seriously interested in visiting this totally implausible concoction.


The program note for WITNESSED BY THE WORLD says: “It’s a play that seeks to stoke the ashes from that fateful time and re-open the conversation about what really happened.” That intention is laudable, but to do so in such a flimsily argued play about issues that have been part of the public record for so long, with the kind of incredible plot twists this play provides, is unacceptable.


This melodramatic farrago is performed on a dreary set, designed by Libby Stadstad, consisting of little more than black wings and a black background onto which some mildly effective chalk drawing-like images created by Matthew Haber are projected to establish certain scenes. Very little money was invested in the physical trappings, but not even a set by John Lee Beatty could have turned this sow’s ear into a silk purse. The principal creative contribution is Lindsay Jones’s original music, which does manage to create some suspense between scenes.


None of the otherwise competent actors is able to rise above the play's contrivances, nor is Karen Carpenter’s direction of much help. A friend pointed out such bloopers as the seatbelts draped over the actors’ shoulders as they entered and exited a car, and the never-never do that act of using a wet eraser on a chalkboard. Such missteps could be corrected easily, but not so the premises of this play, which could use a wet eraser of its own. Tovah Feldshuh was originally announced as the play’s star; she seems to have bowed out so she could take over Andrea Martin's role in PIPPIN, which couldn't have happened at a better time. This is not a play in which she would have wanted to be witnessed by the world.
Posted by Samuel L. Leiter at 8:15 PM