A.R. Gurney, whose work in recent years has been a mainstay at the Flea Theatre, returns with FAMILY FURNITURE, yet another in his chronicles of WASP family life. The family here lives in Buffalo, a favorite Gurney locale (he was raised there), the time is the summer of 1952, and the seams between conservative WASP values and those of the postwar generation are beginning to fray. There is nothing earthshaking in this quiet picture of family life, and we’ve seen it all before, but Gurney’s low-key, naturalistic style and the nicely complementary approach of the actors under Thomas Kail’s unobtrusive direction keep the piece afloat for its intermissionless 90 minutes. 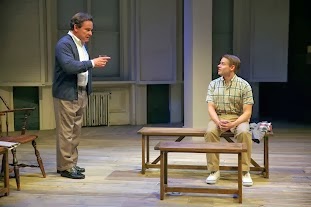 Peter Scolari, channeling the simple underplaying of his former “Bosom Buddies” costar, Tom Hanks, is Russell, the well-off father of college students Peggy (Ismenia Mendes), a Smith student, and Nick (Andrew Keenan-Bolger), who's at Williams. The family is spending the summer at their lakefront home on Lake Erie, where Russell likes to fish and sail. Peggy has an Italian-American boyfriend, Marco, but Russell, despite his professed love of the Italian people when they’re in their homeland, has reservations about them in America, where he thinks of them as being either gangsters or politicians: "they misbehave when they're away from their roots." He reveals his own youthful love affair with a Jewish girl, which he thinks amply demonstrates why alliances with people from other family backgrounds are unwise. He allows Peggy to go on a month-long trip to Italy, hoping it will be the antidote to Marco, and is thrilled when she comes home having met and possibly fallen for a wealthy, dyed-in-the-wool WASP boy from Philadelphia named Hamilton Booth who goes to Princeton. Russell’s sense of vindication is swiftly altered when Peggy reveals she may be pregnant by him. Suddenly, “Princeton,” as the smugly upper-crust Russell calls him, is a “rascal” who will pay for whatever expenses are incurred. The idea of “abortion” is only indirectly suggested. Meanwhile, Nick is in love with a Jewish girl, Betsy (Molly Nordin), a Bennington student of poetry. Russell once again expresses his unease about such a cross-ethnic relationship. Gurney delicately navigates Russell’s them versus us mentality in a way that shows it as more than simple bigotry. Although far less common now than then, we all know families that object to their children marrying outside their ethnicities.


The central plot device is Nick's suspicion that his mother, the attractive Claire (Carolyn McCormick), is having an affair with Howard Baldwin, a family friend. Unlike the uptight Russell, Claire has more liberal ideas about human relationships ("I believe in hybrid vigor"), so it's not unlikely that something is, indeed, going on. Betsy, Nick’s girlfriend, even plots to have him and her read aloud the closet scene from HAMLET in front of Claire to gauge her reaction as a way of testing her guilt. Claire's behavior profoundly affects Nick, whose summer ends with him having moved a step forward toward maturity.


In this cultured world of privilege and ease, tennis and martinis, people rarely raise their voices. An undercurrent of polite repression races through everyone's veins, an attitude expressed in Russell’s insistence on the proper use of English. The actors convincingly capture through timing and emphasis many of the subtextual nuances, and they capably express both the humorous and poignant elements. Rachel Hauck’s setting, too, is tastefully spare but nuanced, being merely three large, white-painted windows and sets of shutters along the rear wall, abetted by some basic wooden benches and a chair that serve for whatever furniture is needed, and can even be rearranged even to imply the presence of a sailboat. The play begins with the opening of the shutters for the summer season, and concludes with their being shut. Filling the brief interstices between the scenes is Bart Fasbender’s sound design of snatches of pop music from the period.


FAMILY FURNITURE has many conventional elements. It doesn’t explore new ground, its plot is familiar, its performances are un-showy. But it has a fundamental level of sincerity that makes it more than it at first appears.
Posted by Samuel L. Leiter at 1:01 PM