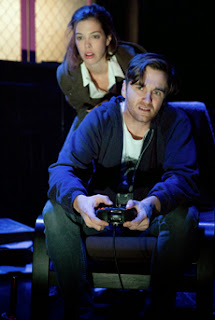 
I’m fully aware that the relatively small number of reviewers who thus far have written about this play, which is having its world premiere at the Flea, have been quite ecstatic about it. Given the dearth of shows to feel that way about, I wish I, too, were in love with MARY-KATE OLSEN IS IN LOVE, but I’m afraid my feelings remain seriously muted. Perhaps this is because I’m decades behind being able to appreciate its funny-sad take on the Millennial generation (despite my granddaughters being a part of it). I can understand the point of its satire, but even an hour of having to listen to two clearly talented young actresses speaking in a pitch-perfect, but exaggerated version of the affectless, whiny, valley girl intonations of the Olsen twins (fraternal, btw, not identical), Mary-Kate (Christine Lee) and Ashley (Kana Hatakeyama), is more punishment than I can bear. Younger spectators, though, who have more of an affinity for these phenomenally successful sitcom actresses turned fashion designers, will clearly feel another way.


This isn’t to deny that Mallery Avidon has written a bright commentary on the dilemma of today’s twenty-somethings, especially women, who have set their eyes on goals which they are likely never to achieve, and will have to learn to live with lesser expectations. It’s just that, as a play, MARY-KATE OLSEN IS IN LOVE plays so fast and loose with clever theatrical devices that I had trouble becoming involved in the characters’ dilemmas, and found little to care about besides playwright Avidon and director Kristan Seemel’s ingenuity.


Grace (Katherine Folk-Sullivan) is a well-educated 27-year-old with a good job, but she feels unfulfilled and spends her spare time as a couch potato stuffing her face while watching cheap TV shows. Her husband, Tyler (Alex Grubbs), a year older, is even worse; he’s unemployed and does nothing but smoke pot and play war-themed video games. A fantasy-like reality invades the lives of both Grace and Tyler. In Grace’s case, the Olsen twins, dressed in their trademark “bag lady” look, manifest themselves before Grace and tempt her with all the things she needs to have in our market-driven world to be truly happy. (There’s an interesting correlation here with the shopaholic character of Mrs. Apex in SELF, the 1856 satire I saw earlier in the day.) Grace even moves to New Zealand to spend her life on the beach with Mary-Kate, only for her to realize that, not only is she not a lesbian, her new life isn’t very satisfying, and she’s ready to settle for the one she had before, mundane as it may have been. Tyler’s avatar is a military figure (Alex Mandell) under whose influence he goes off to war and dies. Despite the stylized presentation, these things actually happen to the characters, so there's no "it was all a dream" denouement. Meanwhile, a chorus of Amazing Girls keeps popping up to express in staccato phrases, first, their aspirations, and, later, their disappointments, as if such has not always been the way of the world.


MARY-KATE OLSEN IS IN LOVE is being given in the cramped downstairs theatre at the Flea, with its odd little acting area partly converted by Scott Tedmon-Jones into a prison-like environment with chain-link fencing and barbed wire. The play takes aim at consumerism, marketing, celebrity worship, and unrealistic expectations. Ms. Avidon also told an interviewer, “The play is a satire about sad people and the inability to grow up. . . . I struggle with what it means to be a grown-up.”


The Flea’s resident acting company, the Bats, shows its usual verve and flair, and they have been directed with imagination to get as much out of the room as possible. This is all well and good, but with a play in which the characters are little more than mouthpieces and cartoons, and with two leading characters whose mannerisms grow wearisome (and I'm not blaming the clearly talented Ms. Lee and Ms. Hatakeyama), I remained at a distance, more interested in looking at my watch than at what was happening on the stage. Perhaps I need to binge on "Full House" and "The Adventures of Mary-Kate and Ashley" if I'm going to get all the twins have to offer here. Or not.
Posted by Samuel L. Leiter at 7:54 PM