137. HOW TO MAKE FRIENDS AND THEN KILL THEM 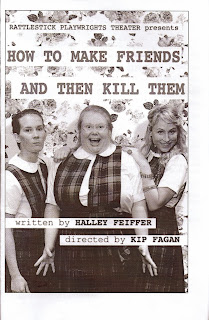 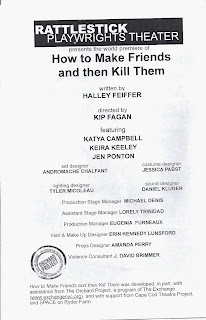 The apple didn’t fall far from the tree in the case of Halley Feiffer--daughter of famed playwright and cartoonist Jules Feiffer--whose black comedy HOW TO MAKE FRIENDS AND THEN KILL THEM is playing at the Rattlestick Playwrights Theater in Greenwich Village. Ms. Feiffer, who’s also an attractive, talented actress, has crafted a tight little play with a streak of the eccentricity, violence, and wackiness found in her father’s most famous play, LITTLE MURDERS; otherwise, it's a totally independent work that makes one hope there’s nothing at all autobiographical in it. 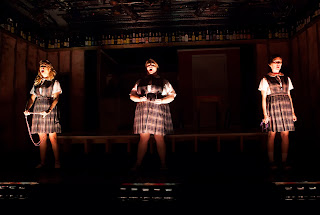 From left: Katya Cambell, Jen Ponton, Keira Keeley. Photo: Hal Horowitz.
HOW TO MAKE FRIENDS, which has three female characters, explores their relationships from the time they are 9 or 10 to when they are nearly 30. Its 15 scenes are divided into sections called “Childhood,” “Teenagers,” “Early Adulthood,” and “Adults.” Ada (Katya Cambell) is the older sister, blonde and beautiful; Sam (Keira Keeley), the one-year younger sister; and Dorrie (Jen Ponton), the plain-Jane friend; all are played throughout by the same actors, who progress from school uniforms to adult clothing but whose personalities remain essentially the same, if only more extreme. Ada is capricious, egotistical, self-involved, and mean-spirited, preoccupied with her presumed beauty, and given to prancing around in beads and striking balletic poses. Sam, more serious and in awe of her older sister, whose affection she craves, wants to write a graphic novella, and is forever drawing sketches of Ada. Dorrie, played here by a substantially overweight actress (not specifically called for in the script), is the poor soul with a myriad of physical ailments who's desperate for Sam’s friendship. The play charts the love-hate relationships among all three over nearly two decades; sadism, sarcasm, physical aggression, power seeking, and homoeroticism all play a part in the mix. The play that most immediately comes to mind when watching it is Jean Genet’s THE MAIDS, with its sadomasochistic role-playing between Claire and Solange. It’s a stretch, of course, but Ada and Sam’s conflicted relationship with the unseen character of their alcoholic, neglectful mother can be seen as a vague analog of Claire and Solange’s relationship to Madame.


The script calls for several locations, although most of the scenes are set in the sisters’ kitchen, with a door opening onto a spooky staircase to the cellar. Set designer Andromache Chalfant has provided mainly the kitchen setting, placed on a raised platform, so scenes at a baseball field or dorm, for example, can be played downstage of the platform, whose edge the characters sit on as needed. Ms. Chalfant, whose Off Broadway sets consistently find imaginative solutions to the problems posed by her projects, offers not merely a tidily realistic kitchen, with red walls and white cabinets and trim, but the platform on which it’s set shows the insulation in the flooring, just as the walls to either side are open so we see their studs and insulation. Overhead, above the walls, a shelf runs around the entire set with dozens of whiskey bottles that are nicely illuminated at certain moments (heightening their role in Ada becoming an alcoholic). And the portal with the spooky staircase is perfectly realized, even though we don’t actually see the steps. Whenever it opens, a spine-tingling sound created by sound designer Daniel Kluger and eerie lighting by Tyler Micoleau make it evident that something dreadful that way lies; in fact, Messrs. Kluger and Micoleau’s work throughout is memorable in bringing life (or its opposite) to Ms. Feiffer’s script. 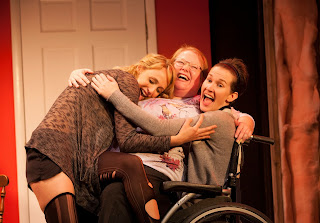 
Kip Fagan’s creative staging provides the play with a realistic world that often crosses the border into absurdist theatricalism. The timing, movement, line readings, and positions of the actors are carefully crafted to create a sense of something slightly exaggerated and off-kilter, but the actors rarely stray too far from a grounding in basic realism.


Keira Keeley and Katya Cambell. Photo: Hal Horowitz.
﻿
Each character, in her own way, is an example of arrested development. They all grow up, of course, but they always remain the children we see at the beginning, playing the same rapid-fire hand-game, for example. They manipulate each other physically with kisses, hugs, and even tongue licking. Their adult complaints about boredom and wanting to die are similar to their kvetching as children. Only now, as adults, the cruelty they expressed in childhood assumes a greater lethality. These adults not only embrace their inner children, they literally squeeze the life out of them; existence has always been a dangerous game, but the stakes have gotten higher.


Even at a brisk and energetic 90 intermissionless minutes, Ada and Sam eventually grow irksome, as does Dorrie’s pathetic infatuation, which serves sharply to heighten the sibling clashes. They shout too much, cry too much, and snarl too much. You won’t like these people, but you’ll have a hard time turning your eyes from them. HOW TO MAKE FRIENDS AND THEN KILL THEM is an unusual, sometimes funny, but also sometimes creepily unpleasant, evening in the theatre.
Posted by Samuel L. Leiter at 8:21 PM