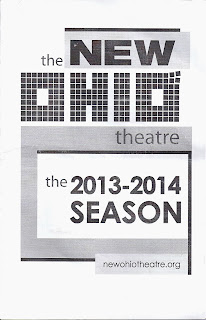 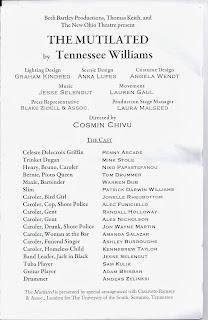 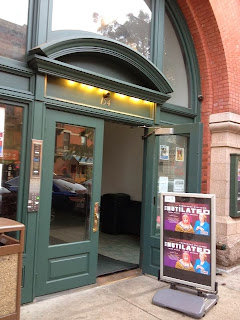 
Shakespeare may be the main course on the revival menu this season, but theatrical gourmets have also been chewing away on the plays of Tennessee Williams, if not quite that many so far. While not quite to my taste, the Broadway revival of THE GLASS MENAGERIE, starring Cherry Jones, has been the dramatic chef's pièce de résistance; playgoers looking for more exotic Williams flavors have had his TWO-CHARACTER PLAY, with Amanda Plummer and Brad Dourif. While that was a rather dull dish, something juicier is now being served, in the form of THE MUTILATED.


THE MUTILATED, at the New Ohio Theatres, was originally produced on Broadway in 1966 as one of two plays on a bill called SLAPSTICK TRAGEDY, the other play being THE GNÄDIGES FRÄULEIN. It bombed and has rarely been seen since. The original stars of THE MUTILATED were the delicate British actress Margaret Leighton and the robust American Kate Reid. The new production, in inspired casting that seems the revival’s chief raison d’être, stars the downtown performance artist Penny Arcade as Celeste Delacroix Griffin, the Kate Reid role, and Mink Stole, best known for her appearances in all of John Waters’s films, as Trinket Dugan, the Margaret Leighton part. Both actresses are now in their mid-sixties, and while neither is known for her work in the so-called legitimate theatre, they fill their roles quite satisfactorily, given the broad theatrical approach taken by director Cosmin Chivu, whose production was seen earlier in Provincetown.


THE MUTILATED takes place on Christmas Eve and Christmas morning, sometime in the late 1930s, in the seedy Silver Dollar Hotel, on South Rampart Street in New Orleans’s Old French Quarter. Celeste is a down-and-out hooker who has just been bailed out of jail, where she was held on shoplifting charges, by her brother, Henry (Niko Papastefanou). Having been evicted from her hotel room, she needs money, wine, and anything else she can wheedle from Trinket, an oil heiress who’s come down in the world, and who wishes desperately to keep secret the fact that she’s had a mastectomy; this is where the play’s title comes from. Celeste knows this secret and has had no compunction about telling the world about it, thereby setting Trinket’s fangs against her. Trinket, miserably lonely, is desperate to have a man spend the night with her; she succeeds in doing so, with unpleasant results. The play imagines the cat-fighting between the two women, who, amidst a world of drunks, sailors, cops, and various riffraff, seek hopefully for a miracle. Throughout, Williams inserts a group of carolers singing his ironic lyrics about such a miracle; the atmosphere of carnality and boozing is infused with an underlying air of New Orleans-style spiritualism, into which the specter of death eventually is inserted, albeit in an oddly good natured way: "Expect me, but not yet, not!" he smiles.


The presence of sensitive, blonde, and refined Southern belle Trixie in this floridly squalid environment is reminiscent of other Williams heroines, such as Blanche, while hennaed Celeste represents the opposite pole of Williams’s worldly spectrum in her fleshy sexuality and boisterous behavior. Williams’s description of Celeste could easily be that of the actress who plays her: “Celeste is a short, plump little woman with a large bosom of which she is excessively proud, wearing low-cut dresses by night and day.” He also says: “her spirit, unconquerable.”


Set designer Anka Lupes, true to Williams’s stage directions, has created a sketchy image of this world, with the hotel indicated in a fragile framework of slim supports lined with tiny lights that illuminate them when necessary, and with a slightly raised area at stage right to indicate Trinket’s bedroom and its exterior balcony and staircase. Graham Kindred’s moody lights, including neon touches, help greatly, especially when Celeste and Trinket experience their epiphany. In one section of the hotel a New Orleans style swing-style jazz band called Tin Pan is ensconced, playing brassy old and original tunes that capture the essence of the Quarter’s atmosphere; the new music is by the talented Jesse Selengut, who leads the band and also plays Jack in Black, the death-like presence. A 9-member chorus sings Williams’s lyrics at various moments, and music underscores a considerable amount of the show. In fact, when you first enter the theatre, the music is already blaring away and sleazy Quarter denizens wander around, enjoying the upbeat sound, and dancing (choreography by Lauren Gaul) to it, setting the tone for what will come. 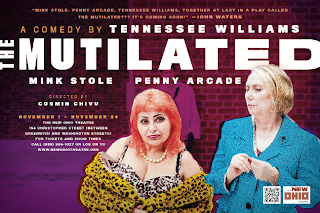 Although Williams always experimented with the theatre’s conventions, THE MUTILATED was written late in his career; this was a time when he had abandoned the familiar, accessible combination of realism and poetic expressionism that had gained him fame in order to explore more unconventional methods, often in one-acts. Still, aside from the appearance of the carolers and a general sense of fantasy, the dramatic interchanges are rather straightforward, although containing a great deal of direct address. Penny Arcade delivers Celeste's monologues as a nonstop barrage of high-voltage, self-conscious rhetoric, heaving her considerable chest flesh about as if aware it’s her primary asset. Mink Stole's Trixie, on the other hand, comes off as a near-parody of Williams’ vulnerable, manic-depressive women; even then she manages to convey something of the pathos in the role.


The stridently energetic, sometimes even borderline grotesque production comes rather near to burlesquing the play, but that seems to have been Williams’s intention (he did use the word “slapstick” in his title), and the effect sometimes seems like seeing the playwright on joy juice. The play has pockets of poetic sensitivity, but these are mostly avoided here in favor of going for the yaks.Even such an oddball piece by Williams deserves revival, especially when given a lively reading like this one. And it's fun to see two still-enthusiastic icons from the downtown theatre and independent movie scene expanding their range by biting into a couple of campy Williams roles. I somehow think old Tenn would have approved.
Posted by Samuel L. Leiter at 9:13 PM