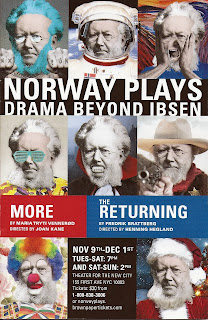 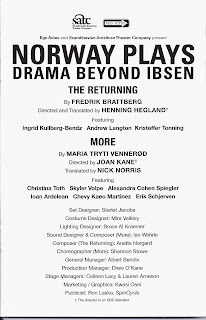 Apart from Jon Fosse, whose A SUMMER DAY was seen earlier this year starring Karen Allen at the Cherry Lane Theatre, contemporary Norwegian dramatists are virtually unknown in this country. In fact, it seems increasingly rare that any European play in a language other than English is given a noteworthy production here. While all other aspects of contemporary life and culture have been vastly influenced by globalization, the American theatre seems to be going backward. New York no longer experiences regular productions of works by current European dramatists of world stature, as it did in the postwar years when writers like Genet, Anouilh, Ionesco, Giraudoux, Brecht, Dürenmatt, and even the French-writing Beckett filled our stages. In a valiant attempt to offer some relief from this drought of new European drama, Ego Actus and Scandinavian Theatre Company are presenting a pair of one-acts, each by a leading Norwegian dramatist, THE RETURNING, by Fredrik Brattburg, directed and translated by Henning Hegland, and MORE, by Maria Trtyi, directed by Joan Kane. The program is almost defiantly titled NORWAY PLAYS: BEYOND IBSEN, as if to demonstrate that one of the world’s greatest playwrights is ready to be challenged by a generation unwilling to continue languishing in his giant shadow.


No one expects a program like this, being shown at the Theatre for a New City, to suddenly reveal talent that comes anywhere near to that of the great Norwegian master, but, sad to say, the plays on display here don't seem likely to stir much interest in further work from Ibsen's homeland. Both plays blend surrealism with realism, with one focused on satirizing the platitudes of family life and the other on modern journalism's circus-like emphasis on sensationalism.


In THE RETURNING, winner of Norway's Ibsen Award, the black box space has been arranged to suggest a spanking clean home, its furniture covered in off-white, wooly fabric. Even the props, including foodstuffs, are encased in cloth, and Mother (Ingrid Kullberg-Bendz) does nothing but knit obsessively, although she admits she doesn’t even know why she’s knitting, since their teenage son, Gustav (Kristoffer Tonning) has been missing for months. Father (Andrew Langton) spends most of his time, when not at work, standing at the window and complaining about how a neighbor family's neglecting to leash their “pooch” allows it to constantly wander off. Before long, Gustav returns, having come back from the dead. Something similar will happen several times in the play. At first, each disappearance and assumed death is followed by a funeral that requests the contribution of mementoes by friends and relatives to be buried in the empty coffin. Gustav always manages to come home, though, dirty and disheveled, having either been buried in an avalanche, drowned in a rowboat, or otherwise demolished in some serious accident whose aftermath he's unable to remember. His returns are accepted as fortunate survivals, at first, and life returns to normal, with Father off to work and Gustav off to school, until the time between Gustav’s deaths and resurrections grows increasingly rapid, even as fast as the speed of light. His presence, in fact, at one point becomes so annoying to his parents that Mother, aided by Father, strangles him to death.
Kullberg-Bendz and Andrew Langton. Photo: Yann Bean.
Gustav’s existence has become an intrusion on the comfort of his parents; whereas his first deaths may have affected them deeply, his presence increasingly has become an impediment to the empty nesting they’ve come to enjoy. Parental love has its limits, and the dead should learn to stay dead. The piece is reminiscent of the absurdism of 60 years ago, and neither its superficial performances nor its uninspired direction do much to make it especially interesting. Ionesco and his fellow absurdists, regardless of their philosophy, were at least very funny. The laughs here are few and far between, although the tone of the acting seems to be going after them. A serious distraction is the use of the cloth-covered food, which the mother cooks (like a child playing house), and which Kristoffer gnaws at hungrily. Just watching almost made me retch.


In the much better directed MORE, translated by Nick Norris, the acting area’s black walls and its floor are covered by aqua-colored satin. At stage right is a sliding pond near (or in?) a pool or other body of water. On the left are a couple of chairs and a table, this area being for the interrogation room of a police station. 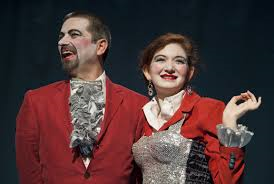 We see two teenage girls in shorts, Ida Samuelson (Christina Toth) and Benedikte (Skyler Volpe), playing on and around the slide, their pseudo-poetic dialogue being riddled with violent words, like steal, murder, fever, whore, and pillage. A slow-mo fight (implying that they're under water) evolves as they alternately play at drowning one another, until Ida takes Benedikte’s head and holds it down, killing her. As played, there's nothing ambiguous about this murder; Ida's expression as she drowns her friend conveys pure malice, although her motive is not clear. A pair of clowns, Linn (Alexandra Cohen Spiegler, using a Southern accent) and Tormod (Ioan Ardelean, Romanian accented), appear, wearing red jackets with silver accoutrements, one in checkerboard-patterned pants, the other in stripes. Their faces are white with glitter, rouged cheeks, and red lips. As in CHICAGO, they represent the sensationalistic media, which turns any newsworthy incident, especially juicy crimes of violence, into a show. This pair flits into and out of the ensuing action, commenting with theatricalist mannerisms (including masks and dance routines, choreographed by Shannon Stowe) on what they see, which is the interrogation of Ida by two detectives, Kristian (Chevy Kaeo Martinez) and Rune (Erik Schjerven). Kristian and Rune do the good cop, bad cop routine as they try to make Ida confess and offer a motive, but she says she can’t remember and just wants to go home. The crime is somehow linked by the public to the nation’s immigration policies, but this is never clarified, although the real motive turns out to be the height of innocuousness, and the playwright seeks at the end to say that “we’re all guilty.” Really? Of what? Of encouraging sensationalistic journalism? Is that what killed poor Benedikte?
Despite my disappointment with MORE and RETURNING, I'd be interested in seeing more Norwegian drama, and would definitely consider returning when the opportunity arose.