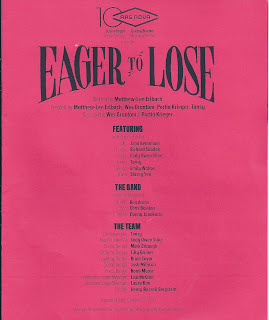 First, let me say that any hetero male friends I invited to see this show but who expressed no interest missed out on an evening where, in the intimate environment of Ars Nova—the place that gave us last season’s hit show, NATASHA, PIERRE, AND THE GREAT COMET OF 1812—they would have had the titillating experience of being in daringly close proximity to the abundantly bare flesh of several very attractive female bodies. Of course, since EAGER TO LOSE is set in a burlesque theatre, the most carnally provocative segments of those bodies are hidden behind the feeble obstructions of G-strings and pasties, but there still is sufficient epidermis on view to satisfy all but the most jaded of voyeurs. Gay men and hetero women may not be as sensually satisfied, but the recent spate of 6-packs, rippling pecs, and bulging biceps on and Off Broadway has served those spectators quite well, thank you. 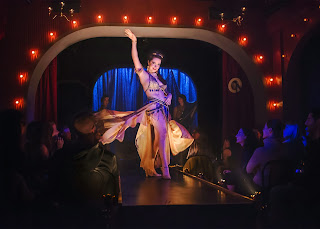 Tansy. Photo: Marielle Solan.
Theatrical voyeurism can only go so far before it goes limp, however, and you need something more than bare boobs and brazen butts to keep your interest up. And EAGER TO LOSE, which could as easily be called EAGER TO PLEASE, satisfies surprisingly well as casual yet clever theatrical entertainment. Designer Mark Erbaugh has completely re-imagined the Ars Nova environment, in keeping with its tradition, so that even the entranceway to the space has been created to make you feel you're venturing into the Tim Tam Room, a highly decorative cabaret bisected by a runway leading from a proscenium stage outlined in light bulbs.


A small bar at the rear of the house serves drinks, a talented band composed of drums (Ben Arons), bass (Chris Bastian), and trumpet (Danny Jonokuchi) is squeezed in to the right of the runway, and the musical director/keyboardist (Cody Owen Stine) occupies a space at the left. The cramped seating is on benches and at little tables. To the immediate stage right of the proscenium is a miniature dressing-room area in which certain scenes take place. Jazzy upbeat music greets you when you enter the theatre; there is lots more during the performance, much of it familiar.David Rose’s “The Stripper,” for example, accompanies the pas de deux that ends the show.


EAGER TO LOSE credits Matthew-Lee Erlbach as its writer, while Mr. Erlbach, Wes Grantom, Portia Krieger, and Tansy get a “created by” credit. Mr. Grantom and Ms. Krieger are also the very smart co-directors, while Tansy did the choreography. Tansy, it must be noted, is known in the burlesque world—which still survives and even has championship competitions—as “The Elizabeth Taylor of Burlesque”; with her luxurious black locks and vintage movie star looks in the Dita von Teese mold, she’s the quite appealing star, playing a role named for herself, that of the Tim Tam Room’s proprietor and headline performer. Tansy and the tall, slim, good-looking MC (John Behlmann) are in love but their relationship is complicated by other issues, mainly Tansy’s infatuation with, of all people, TV actor David Schwimmer, who wants to support her on a world tour. (Notice to fans of "Friends": Mr. Schwimmer doesn't actually appear.) She promises to choose one of her two other strippers, the blonde Glinda (Emily Walton) or the exotic Trixie (Stacey Yen), as her successor, setting up what becomes a deadly competition for the job. But nothing here is to be taken seriously and the piece is actually conceived as a farce, with overtones of A MIDSUMMER NIGHT’S DREAM, TWELFTH NIGHT, and THE COMEDY OF ERRORS. Referring to Shakespeare is apropos, since—believe it or not—almost all the dialogue is written in rhymed couplets, many of them combining both Elizabethan words and 21st-century profanity. The conceit does wear a little thin, and the farcical speed sometimes teeters on the verge of slowing down, but some bright idea always manages to pop up and get everything back on track.


While EAGER TO LOSE begins like a conventional burlesque show, including a guest stripper at each performance and plenty of off-color commentary by the MC, the permutations of the comedic action eventually take precedence, with plot-driven interruptions for comical musical numbers giving the ladies plenty of opportunities to sing, dance, and wear the bright and wittily enticing costumes of designer Tilly Grimes under the always innovative lighting of Brian Tovar. Although the talents of the evening’s ecdysiasts are not to be ignored (impossible!), the real show stopper is a mimic genius named Richard Saudek, who plays Peeps, a mute comic stagehand who communicates through gestures. Wearing hiked up overalls, his shoulders hunched to make his body almost a question mark, Peeps moves through the action with simian facial expressions and remarkably lithe arm and body movements, expressing himself in several unforgettable scenes I can only call “mimologues.”


EAGER TO LOSE, which began as an improvised project with no script, has been in development at Ars Nova for two years. I’m not certain it has the legs to come back for an independent run the way NATASHA, PIERRE . . . did, although, judging from the whooping and hollering from the audience during the show, and the overwhelmingly upbeat comments I overheard in the lobby at the end I wouldn't rule out the possibility. While it’s still available during its limited time at Ars Nova, it wouldn’t be a bad idea to trek over to W. 54th Street near 10th Avenue to catch it. Regardless of how my friends reacted to my invitation to see it, it’s an opportunity I wouldn’t be eager to lose.