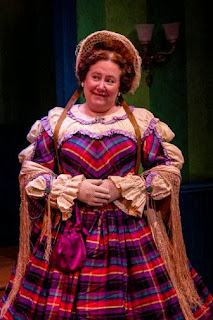 Page Clements. Photo: Leonardo Mascaro.
A visit to the tiny Metropolitan Playhouse on E. 4th Street is always an educational experience. The company’s dedication to reviving long-forgotten plays from America’s past, while done on a dime, offers useful lessons not only in the theatre of years gone by, especially before the 20th century, and gives living expression to the morals and issues that stirred old-time playwrights to put pen to paper. Even in productions that must make do with minimal sets and props, and with actors of varying ability, this company provides a fair idea of what our forebears experienced at the theatre in those days of long ago. It’s not likely any other local company would revive a play like SELF: AN ORIGINAL COMEDY, an 1856 comedy of manners by Mrs. Sidney Frances Bateman (1823-1881), who enjoyed a successful stage career both in America and England, so hats are off to the Metropolitan for allowing us the chance to see it.


SELF betrays many of the melodramatic excesses of its day, with florid language, stereotypical characters, endless expository monologues and asides, mechanically contrived situations, and moralistic browbeating. Thankfully, however, even with its obvious manipulations, it has moments and ideas of continued interest and relevance. Still, in what seems to be an uncut version that runs 2 hours and 45 minutes, it is far too overblown to sit through comfortably; aside from a few exceptions, its actors are at sea in trying to invest their verbose and overwritten roles with any sense of reality, forcing them to rely on artificial gestures and facial expressions to cover their inadequacies.
﻿


SELF is determined to instruct its audience about the dangers of debt, which it sees as the result of a national obsession with conspicuous consumption. Its lessons, as pertinent today as they were over a century and a half ago, are couched in a play that shows us a wealthy businessman, George Apex (Doug Farrell), whose second wife, Clemanthe Apex (Page Clements), not only has a nasty shopping habit but is the mother by a previous marriage to Charles (Drew Ledbetter), a reckless gambler who looks down on those who work for a living. Apex, for all his seeming wealth, is actually on the verge of bankruptcy, but his beautiful, angelic daughter, Mary (Erica Knight), willingly agrees to save him by signing over to him the entirety of a $15,000 legacy she's inherited from an aunt. However, unaware of this, the selfish Mrs. Apex convinces the at first hesitant Charles to forge Mary's name to a check to pay off their own debts. Showing a glint of decency, Charles says he’ll give up gambling and get a job as a clerk. His pretentious mother says this “will break my heart!" “Better be a working man than a thief,” Charles replies, only to give the idea up when his mother convinces him that the forgery is no such thing, but merely a temporary “borrowing,” which she says she’ll pay back in a few days. However, when Mr. Apex learns from the bank that the money is no longer, he blames Mary—who has promised Mrs. Apex not to reveal the truth—for reneging on her promise, and he tosses her and her faithful black nurse (Mary calls her “Mammy”), Chloe (Marie Louise Guinier), out into a life of penury. “Out of my sight, viper that you are!” rants Apex to his daughter. But all is not lost, since Mary’s loving and wealthy, if crabbily upright godfather, John Unit (Howard Thoresen), comes to the rescue. Almost every sentence of this 60-year-old misogynist (except where Mary is concerned) weighs things in terms of whether they “pay” or not; when the nefarious doings of Mrs. Apex and her son are exposed, Mr. Unit spreads forgiveness around like marmalade and finds a suitable, if private, punishment for the wrongdoers. Surrounding these central characters is a group of comedic gossips who provide commentary on the goings on, and get their own comeuppances as well.


SELF teaches us, among other things, that work is virtuous and gambling ruinous; that mindless consumption and vanity is wicked; that frugality is essential and debt is horrible; and that self-interest plays a part in all we do, even when we act charitably toward others, but reminds us that we should act selflessly whenever possible. Even old Unit, with his insistence that the only things of value are those that pay, discovers that “love, respect, and sympathy are the only things that pay.” SELF, written four years after UNCLE TOM’S CABIN, also teaches racial tolerance. The black nurse Chloe, despite her dialect-laden lines, is actually written as a human being with strong moral standards that are recognized and appreciated by the others in the play; such roles were rare in mid-19th-century theatre, a time when blacks were played by white actors in blackface in stereotypically clownish ways. As someone says in SELF, Chloe is one more proof that “outward covering is not to be depended on.”


As often at the Metropolitan, the various scenes (all of those in SELF being interiors) are all played within the same basic environment, designed here by Aaron Sheckler; the change of locales is indicated only by a change in furnishings. Scenery is not the Metropolitan’s strong suit, but enough indications are provided to let us know when we’ve moved from one place to another. On the other hand, the Metropolitan normally provides visual interest in its costumes, and, considering the low budget, Sidney Fortier must be strongly commended for the attractive period clothing with which she’s dressed his cast, especially the women. Women’s garments in the 1850s used great swathes of material and were highly decorative, and the wide, hoop dresses on display here are truly eye-catching. Kudos to the actresses for maneuvering them about the cramped acting area without knocking anything over!
Under Alex Roe’s direction, the tone mixes melodrama and satire in equal proportions, Mr. Roe thoughtfully inserts ten period songs sung by a quartet of actors to cover the scene changes. Of the actors, only Howard Thoresen as the crusty but kind Mr. Unit is truly grounded and believable. Erica Knight is perfectly cast as the selfless Mary, but she has a distracting tendency to scrunch her eyes as a way of expressing both joy and sorrow. Drew Ledbetter makes a fairly effective profligate as George, but Page Clements, acceptable when speaking, overacts when she has to express herself without words. The remaining cast members, especially Kyle Payne as a foppish parvenu, are simply out of their element here.