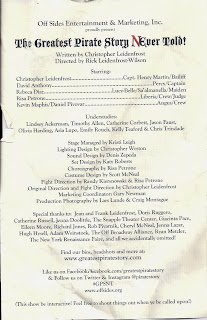 Shiver me timbers, mateys! A band of rascally pirates are walking the scurvy planks of the Snapple Theatre Center, where they’re trying hard to avoid a trip to Davey Jones’s locker. It’s a right smart band these knaves are, and they’re having a grand old time telling the tale of how a witch rises up and makes them act out a story that’s their only chance of returning safely home. But the story they have to enact, written on a scroll, has had its key words blacked out by the ink of a squid, so the land lubbers in the audience have to supply the missing words to fill out this tale of adventure on the high seas; no, my lads and lassies, this arrr-en’t no CAPTAIN PHILLIPS. Even the name of the captain of the Goode Shippe Dinglehop needs to be supplied at each performance; at the one I sailed on, we had a Capt. Bloomberg, while a saint mentioned in the tale was Saint Fluffy. 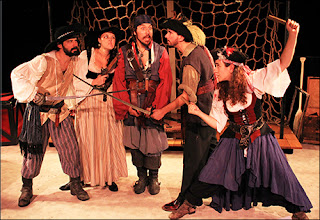 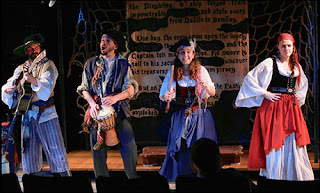 Christopher Leidenfrost has written this part-improvised, part-scripted adventure, a surprisingly charming musical tale of life on the high seas, in which the ensemble of five (Mr. Leidenfrost, David Anthony, Rebeca Diaz, Risa Petrone, and Kevin Maphis) gives no quarter when composing rhyming lyrics on the spot, while also engaging in multiple role playing, sword fighting, hearty kissing of buxom wenches, and all the other things expected of deck-swabbing buccaneers. Under the captaincy of director Rick Leidenfrost-Wilson, Mr. Leidenfrost’s husband, the show has a sprightly, rum-soaked humor that makes you want to growl “Arrr!” 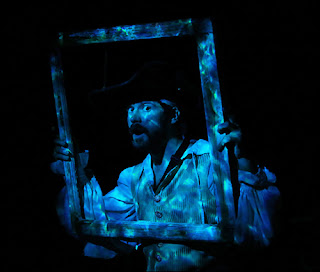 Played against Katy Roberts’s simple but effective set, mainly a backdrop of a ship’s rope netting, with a hanging story scroll for all to see, the one-hour play moves swiftly, until all is happily resolved. Kids get a chance to participate, but the material is aimed as much at their parents as at the young’uns, and much of the clever humor surely flies well above the head of the average child.


Scott McNeal’s pirate costumes look precisely right (although no one wears an eye patch), Christopher Weston’s lights create the feel of life at sea, and everything holds together without a touch of mal de mer. The family-oriented performances are on Saturday mornings, but there’s an adult version done on Thursday nights by the same crew of rogue, and I can imagine how these appealing scoundrels can convert this booty into something down and dirty. So batten down the hatches, blow the man down, and yo ho ho, it’s a pirate’s life for me and you.
Christopher Leidenfrost. Photo: Lars Lunde