One of the most exciting news items of the current theatre season was that legendary Broadway composer John Kander, now 86, had written the music for a new Off-Broadway musical, THE LANDING. This would be his first show since Fred Ebb, with whom he collaborated on classics like CABARET and CHICAGO, died in 2004. Taking on the book and lyrics would be promising young playwright Greg Pierce, whose play SLOWGIRL was seen at Lincoln Center’s Claire Tow Theatre last season. With a small cast headlined by Mr. Pierce’s uncle, David Hyde Pierce, and sets and lighting by two of Broadway’s leading designers, John Lee Beatty and Ken Billington, THE LANDING’s creative team augured well for musical theatre lovers. Sad to say, THE LANDING, composed of three plodding mini-musicals running an intermissionless 100 minutes at the Vineyard Theatre, is dull as lead. Of course, some reviewers, including Ben Brantley in the New York Times, found it bright and shiny, but I saw little here to celebrate and much to lament.
A four-actor ensemble composed of Julia Murney, David Hyde Pierce, Paul Anthony Stewart, and Frankie Seratch, a child actor, appears, to little avail, in each of the three pieces. Too much of the material simply floats drearily by in a swamp of whimsy, and most of it is boringly unimpressive. The first and third acts, “Andra” and “The Landing,” offer strained attempts at pathos, while the center piece, by far the weakest, is something of an absurdist farce, with an emphasis on the absurd.


In “Andra,” Noah (Mr. Seratch) is a kid whose dad is off on business in Tokyo while his lonely mother (Ms. Murney) is having a new kitchen installed by a handsome carpenter named Ben (Mr. Stewart). Noah, an exceedingly bright boy who is being bullied at school, is befriended by Ben, who has a daughter of roughly Noah’s age. Ben is fascinated by astronomy and mythology and opens Noah’s imagination to the stars (Andra is Ben’s nickname for the Andromeda constellation), even lending him a telescope. But this gift only leads to Noah’s discovery that his newfound surrogate father figure is carrying on with his mom, and the boy’s budding dreams of the stars come crashing down to earth. With no time to develop the story—much of it narrated by Mr. Pierce—or its characters, this is little more than a depressing, pointless sketch. The bullying back-story goes absolutely nowhere, nor does the information Ben provides that his daughter's face is scarred. 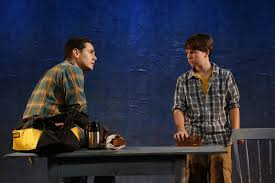 Paul Anthony Stewart and Frankie Seratch. Photo: Carol Rosegg.
The second piece, “The Brick,” shows us a boy, Darius (Mr. Seratch), who’s spending his summer with his Aunt Charl (Ms. Murney) and Uncle Cliff. Charl loves to watch old gangster movies on TV and imitate their dialogue and action. One night, she sees a commercial selling bricks from the 1929 St. Valentine’s Day Massacre, and can’t resist buying one. It’s delivered in a huge package because the brick is represented by a roaring 20s gangster (Mr. Pierce) in fedora and pinstriped suit; he’s also packing a Jimmy Cagney accent and a faint attempt at Cagneyesque swagger. Much of the time all we see of him is his head resting on the fireplace mantelpiece. Suffice it to say that the brick is cursed and that Aunt Charl ends up straitjacketed in the loony bin. There are a couple of numbers choreographed by Josh Rhodes for Murney and Pierce, neither of them known as dancers, in the jazzy CHICAGO vein. This is no CHICAGO, however, and even Bob Fosse would have run into a brick wall trying to stage it.


“The Landing” closes out the evening on a morbid note. An Upper West Side married gay couple, Denny (Mr. Pierce) and Jake (Mr. Stewart), adopt a child, Collin (Mr. Seratch), who turns out to be preternaturally smart, talented, and well-traveled. No explanation is given of how they managed to find a well-educated, well-adjusted, 12-year-old white kid like this; you simply have to buy it, just as you have to buy so much other implausibility in this musical misstep. Denny and Jake are overwhelmed with the love they have for their new family member; soon, though, Denny finds himself jealous of the attention paid to Jake by Collin, and observes, with irony, that he's losing the love of his life to his son. However, he also discovers that Collin is something other than what they thought he was. That something is supernatural and has to do with mortality; love’s labor is soon lost at a pier called the Landing. It’s bad enough when love vanishes because of human interactions; do we need to have it stolen by otherworldly plot devices? What's the point? Moreover, much of the action is narrated by Ms. Murney, a device also used in "Andra." Why this is needed in material written for the stage and not adapted from another source is--as a great librettist/lyricist once wrote--a puzzlement.


None of these stories is believable, amusing, or affecting, and neither Mr. Kander’s music, nor Mr. Pierce’s lyrics, apart from a sprinkling of songs, is enough to inject much interest in them. In fact, there’s a preponderance of book and a dearth of singing, although there’s often music tinkling in the background. At some points I felt I was watching a play with music rather than a musical play.


John Lee Beatty’s practically bare set is a simple framework of three false prosceniums, one behind the other, allowing each locale to be established by a few basic props. Ken Billington’s lights effectively make this spare environment atmospheric, while Michael Krass’s costumes are serviceable; the brick’s gangster suits, one black and one white, offer some period spark, but Ms. Murney’s flapper dress simply looks odd.


Not much survives this show’s crash landing.
Posted by Samuel L. Leiter at 10:14 AM