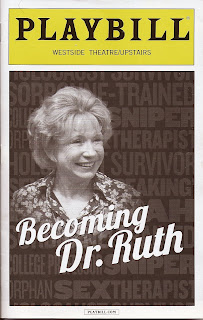 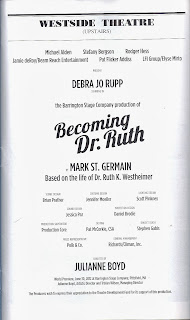 BECOMING DR. RUTH is a one-woman show at the Westside Theatre. It's by Mark St. Germain and stars Debra Jo Rupp as Dr. Ruth K. Westheimer. The play is set in 1997 in Dr. Ruth's Washington Heights apartment, overlooking the George Washington Bridge, shortly after the death of her third husband. For 90 intermissionless minutes the effervescent, 4 foot 7 inch, German- accented sex therapist talks to the audience about her remarkable life while putting her belongings in boxes preparatory to moving. This vivacious and courageous woman, who escaped the Nazis by fleeing to Switzerland in the Kindertransport program, and who lost her family in the Holocaust, has a fascinating biography, including service as a sniper in Israel’s Haganah.


The play has been directed by Julianne Boyd, an old friend and former student (at the CUNY Graduate Center). Because of that relationship, I'm recusing myself from reviewing the show and advise readers to look for other commentary online.
Posted by Samuel L. Leiter at 9:00 PM