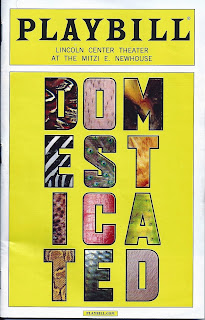 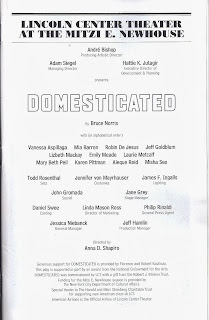 So here I am, a long-married, heterosexual man, sitting at the Mitzi Newhouse Theatre, watching Bruce Norris’s DOMESTICATED, a smart, stinging, sassy, subversive satire about subjects such as monogamy, gender politics, marital infidelity, the battle of the sexes, and male sexual desire. The play begins with Bill Pulver (Jeff Goldblum), a middle-aged politician, struggling embarrassedly to make a public apology for a sexual peccadillo as his wife, Judy (Laurie Metcalf), stands grimly by, looking up at him with that classic Silda Spitzer glare. It’s not long, however, before I notice that the 58-year-old Ms. Metcalf is dressed in a beautifully tailored, off-white pants suit that moves nicely with her, outlining her trim legs and apparently still buff derriere. Of course, I simply file this away in my storeroom of visual impressions regarding the play I’m seeing, just as I do the way Todd Rosenthal’s simple but eminently suitable set has turned the Newhouse into an intimate arena, and how the familiar presence of Mr. Goldblum remains as impressively tall and lithe as ever, albeit with graying and somewhat thinning hair. But I observe Ms. Metcalf’s appearance with particular attention because she is, after all a woman, I’m a man, and my psychological makeup is hotwired to respond in specific biological ways to good-looking specimens of the opposite sex. 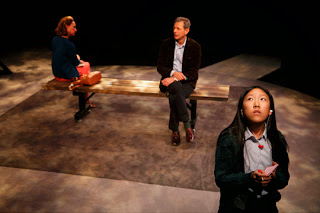 
Of course, as Ann Roiphe points out in “Order and Desire,” her contribution to the Lincoln Center Review’s collection of essays and art related to the play’s themes, the situation is more complex than that. Women are also often subject to biological urges that need to be controlled: “Inside the vagina, blood rushes and throbs intensely, excitement rises and causes girls to forget their modesty and scream at rock stars, or dance under disco lights like nymphs at an orgy in the Greek woods, where Apollo was chased by Venus and mourned by her, too, not for his ability to shoot a deer but for the beauty of his torso, the wonder of his body.” And "the sexual imagination is a creative force that is equally alive, equally available, to male and female." Sexual expression is as varied as the phases of the moon. 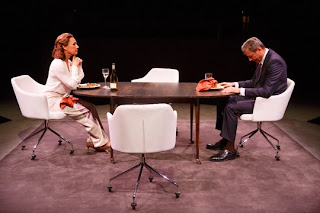 
Social conditioning prevents us from simply acting on our urges, and most of us live in a maze of rules and regulations that go under rubrics such as fidelity, chastity, monogamy, and so on. As Ms. Roiphe notes, “In the real world, sex must be managed in the service of order, and that is not the most joyous of conditions.” We are, in other words, domesticated. The conflict between biology and the need for self-control has been treated in countless books, plays, and movies touching on sexual indiscretion, but, in Mr. Norris’s stimulating play, the issue itself, as apart from the results it leads to, is aired in a terrifically entertaining way that, while providing no specific answers, gives us plenty to think and laugh about.
From left: Mia Barron, Lizbeth Mackay, Karen Pittman, Jeff Goldblum, Vanessa Aspillaga. Photo: Joan Marcus.


The escapade that brought Bill down was with a young hooker named Becky (Aleque Reid) who, while with Bill in a hotel room, fell and hit her head on a bed frame, putting her into a coma. Bill is the subject of a lawsuit that claims she didn’t fall accidentally but that he pushed her, and he has to resign from his (unspecified) political position and express contrition, like so many others in the Weiner-world of recent years. DOMESTICATED takes us behind the scenes of his disgrace, where he must deal with a wife, herself a high-stakes player as a charity organizer, who turns on him with all that womanly scorn with which even hell's fury can’t compete. Not that she’s an angel, by the way, as her own past includes a college-years affair with the head of—get this—the Ethical Studies Department. 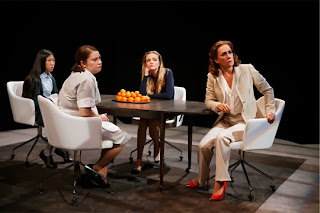 From left: Misha Seo, Vanessa Aspillaga, Emily Meade, Laurie Metcalf. Photo: Joan Marcus.
Bill turns out to be something of a sex addict, having spent $74,000 on prostitutes, and also having once had an intimate encounter with Judy’s best friend, Bobbie (an excellent Mia Barron), who is also Bill’s high-powered lawyer. DOMESTICATED charts the decline in Bill’s marriage, the hatred he inspires in his already bitchy, opinionated, and spoiled daughter, Casey (Emily Meade, very good), the family's economic troubles, and Bill's desperate attempt to get back on his feet by returning to his previous profession. That profession? Gynecologist! When none of his patients want to have anything to do with him—including a veiled Middle Eastern woman who speaks not a word of English but knows all about him (Judy has written a book)—his reactions are anything but understanding.


In act one, Bill is almost sympathetic in his wordless reactions to the vitriol being spilled like acid on him as he stands by struggling unsuccessfully to offer some sort of redemptive commentary. No one cares to hear him or gives him a chance to speak, and Judy dominates and fulminates, but in act two the pendulum swings to Bill’s attempts to justify himself as a creature of biology who is simply reacting to his natural urges, with no evil intent. Love is dismissed as merely a convenient cover for lust, which reminds me of something Samuel Beckett once said to explain his relationship with women: “This thing called love, there’s none of it, you know. It’s only fucking. That’s all there is—just fucking.”


To further enlighten us regarding sexual relations, the play has Bill’s other daughter, Cassidy (Misha Seo), a Cambodian adoptee in middle school who barely speaks at any other time, appear periodically to present a lecture with video clips on male-female relationships in the animal world. As these mini-lectures progress, they increasingly demonstrate the decreasing importance of the male and the ascendance of the female.


The play employs 27 female characters and only one male, with many of the females played by a handful of versatile actresses, Vanessa Aspillaga, Lizbeth Mackay, Mary Beth Peil, Aleque Reid, and Karen Pittman (really good in a role spoofing Oprah-like self-serving TV interviewers). There is also an angry transvestite, played convincingly by Robin De Jesus, who challenges Bill in a bar, an altercation that forces Bill to wear an eye patch through much of act two. He keeps saying that it’s really nothing, worst case he’ll lose the sight in that eye, almost as if he’s accepted this affliction as part of his martyrdom.


There are a number of things in the play that could be called flaws, but they’re the kind that you think about afterward because you’re too busy enjoying the good stuff to want to dissect it too soon. For example, the cockily defiant Bill’s self-justifications seem overstretched; his overheated arrogance toward his women patients is implausible in someone with his background (and in serious need of a job); Bobbie’s revelation to Judy of what happened between her and Bill is hard to swallow, even if she’s drunk; and Casey’s lecture seems too advanced for a kid her age.


But in a season—and I’m going back to early May—lacking a single new play that rises above passable, DOMESTICATED stands out like a beacon of clever and involving theatre, thoughtful, with sharply satirical dialogue in the heard-in-an-elevator Mamet mode. And all is made even more outstanding by the excellence of an acting ensemble led by Jeff Goldblum and Laurie Metcalf. These two actors have become among the leading artists of the New York stage, and are among only a handful of nonmusical American performers I’d go out of my way to see, no matter what they're in. When they engage in an emotional screamfest of vituperation and regret, they yank you so forcibly into their private world that you feel you may have to look away.


Enhancing everything with pitch-perfect orchestration and timing is director Anna D. Shapiro, who paces the action and diatribes like a piece of music. Jennifer von Mayrhauser’s costumes perfectly suit the characters who wear them, telling us precisely who they are and what kind of tastes they have. James F. Ingalls’s lighting makes the open space of the arena stage a palette for the many isolated scenes.


DOMESTICATED gives New York theatergoers their first important new play of the season. The competition so far, on and Off Broadway, has been abundant but the quality slim, so one can only hope things get better. Last year, Chris Durang’s VANYA AND MASHA AND SONYA AND SPIKE opened at the same theatre at just around this time, and went on to Broadway, winning numerous awards. Will lightning strike twice in the same place? A season earlier, Bruce Norris won the Pulitzer for CLYBOURNE PARK. Will DOMESTICATED, even with some critical naysayers having expressed their views about it, have similar good fortune? All I know is that I was impressed by the play and its production; also, I’m still thinking about Ms. Metcalf’s derriere.
Posted by Samuel L. Leiter at 5:20 PM