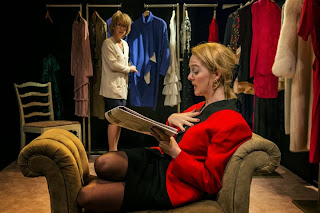 In FIX ME, JESUS, Helen Sneed, a real-life political strategist and organizer for the Democratic Party, has written a play about someone in the same line, a Texas belle named Annabell Armstrong (Polly Lee). When the play begins Annabell, wearing a full-length white fur coat (fox? ermine?), rushes into the dressing room at Dallas’s Neiman Marcus Department Store complaining of a sudden November heat wave that is giving her the head sweats. From the start, this character seems manic and unreliable, and, no matter how smart or educated she is (she likes to toss off literary references), she seems more like a bundle of theatrical devices than a living person.


Ms. Lee’s performance in the tiny Dorothy Streisin Theatre at the Abingdon Theatre complex seems even more overwrought than necessary when you have to watch your feet for fear you’ll kick a piece of stage furniture or cause an actor to trip, but, despite the intimacy of the space, director Sam Pinkleton is not after naturalistic performances from the women who largely constitute the dramatis personae. Only Lee Roy Rogers as Mrs. Craig, the sales associate who has catered to the Armstrong women for three decades, gives a restrained performance, as does the sole male on the premises, Mitch Tebo, playing Dr. Maxwell Feld, Annabell’s shrink, who has moved to Dallas to set up a new practice there. Ms. Rogers makes her character the play’s most believable, but Mr. Tebo seems unsuited to the role of a Jewish psychiatrist from New York.


Christopher Ford and Dakota Rose are credited with the set and costumes, but there is little set to speak of, merely several racks of women’s dresses lining the black-painted walls. Space limitations seem to be responsible for the lack of even the dressing room mirrors called for in the script. There are lots of period costumes, though, since the play is set in 1986, during Ronald Reagan’s second presidency, and 1963, around the time of President Kennedy’s assassination. For most of the play, when she's not simply in her black slip, Annabell wears a red jacket with black piping over a black skirt. Despite the presence of two designers, her jacket looks two sizes too big. 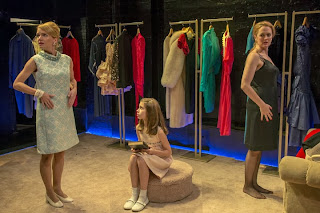 Lori Gardner, Kate Froemmling, and Polly Lee. Photo: Kim T. Sharp.
The dressing room itself, a place of illusion and deception, becomes a metaphor for the changes in Annabell’s life, from the time she was 10, with Mrs. Craig—whose own secrets relative to the Armstrong family will emerge—serving as the deceptively neutral background against which events transpire.


The principal action during which Annabell’s experiences are revealed is her desperate search, with Mrs. Craig’s assistance, for just the right dress to wear to a very special country club wedding that evening. As she tries on and rejects one after the other of the choices given (most of them looking like thrift shop purchases), we see her childhood self (Kate Froemmling, sweet, making her debut), her very 1960s socialite mother (Lori Gardner, working too hard), and her domineering grandmother (Lisa McMillan, overdone) creating the neurotic into which Annabell will develop. The mother is obsessed with a fear of excess body fat and, with her regimen of diet pills, practically browbeats her child into anorexia, while the grandmother is about as nasty a piece of Southern bigotry as you can imagine, a virago of hatred toward gays, blacks, Jews, or anyone who is somehow different. She also packs a pistol in her pocketbook, a pistol that will, unconvincingly, play its role during Annabell’s search for the right party dress. No wonder Annabell needs analysis to iron out her psychological wrinkles. You can decide for yourself if she would fall in love with this particular doctor (who’s married, by the way).


FIX ME, JESUS combines comedy and drama, but the comedy is only sporadically risible and the drama is forced and undramatic. A lot of the play pokes satirical fun at Republican conservatism while favoring Democratic liberalism, but since this is all taking place so long ago, the political insights seem tired. There’s little here that casts much light on our current left-right divide, so the political subtext seems more a garnish than anything substantial. FIX ME, JESUS is a character study, and if you can believe in and sympathize with a character who would wear a full-length fur during a heat wave, this is a play for you.
Posted by Samuel L. Leiter at 10:22 AM