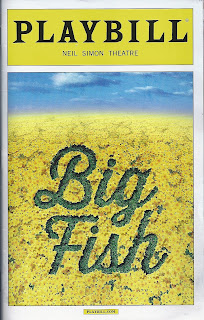 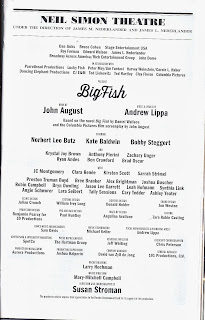 Big fish or not, this is one Broadway musical I’d like to throw back into the water as being too underdeveloped for the theatrical dinner table. Based on the 1998 novel by Daniel Wallace that Tim Burton made into the 2003 film of the same name, BIG FISH, at the Neil Simon, has a book by the film’s scriptwriter, John August, and music and lyrics by Andrew Lippa. Workable as the plot may be within the liberal parameters of a novel, when put on stage it needs to have dramatic propulsion that moves inexorably from a beginning to a conclusion; BIG FISH has a central conflict, but the plot is a string of pearls, a series of flashback anecdotes, and the string holding those pearls together can come apart at any moment. When the pearls become interchangeable with others, none being of essential importance to the integrity of the whole, we get an inchoate stew like BIG FISH. 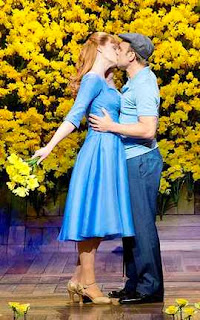 
The show’s conflict is between Will Bloom (Bobby Steggert), a young reporter from small- town Alabama working in New York, and his dad, Edward Bloom (Norbert Leo Butz), an inveterate storyteller. Edward’s tall tales about his heroic deeds seem so outrageous that Will, enamored of them as a kid, determines to verify them as an adult before he can come to terms with who his father really is. Some of the movie's major sequences are simply omitted, like the story about the town of Spectre, while new ones are added, like the one about Edward’s heroism in capturing a super-enemy during what seems to be World War II. I suspect that the idea of having a USO-themed jitterbug number with girls dancing in skimpy red, white, and blue was the reason for the change. There are numerous other differences between the movie and the show, including the Broadway witch’s (Ciara Renée) using a crystal ball to tell the future instead of it being visible in her blank eyeball; the witch, once her function of revealing to Edward how he will die is over with, disappears; in the movie, where she’s played by Helena Bonham-Carter, she makes an important reappearance.


Regardless of these and other major changes, which are always to be expected in such transfers from one medium to another, BIG FISH is a relatively faithful adaptation. It has all the elements traditionally associated with big Broadway musicals—loads of spectacle, chorus girls, acrobatics, lots of upbeat and sentimental songs, romance, family conflicts, unusual settings, and colorful characters and costumes. But the result is a vacant, poky show that is all surface; despite every effort to tug at heartstrings, it remains insipid and corny. A lot of energy and money has been spent in the pursuit of an unattainable goal. I’d viewed the movie back in the day, and watched it again before visiting the show. The second viewing confirmed my feelings about it—despite nice visual effects, it left me cold. But it was good to recall that Edward was played by two actors, Ewan McGregor as the young Edward and Albert Finney as the older Edward. McGregor is Scottish and Finney British, but both had richer Alabama accents (Finney’s being too rich, actually, for my taste) than that of Mr. Butz, who plays both the younger and older Edwards. His accent is indeterminate and uneven, but that’s only one of his problems.


Mr. Butz is one of Broadway’s most versatile stars, appearing in both straight plays and musicals. He can sing, dance, and act, and is usually cast in shows that allow him to exercise his broadly theatrical and energetic stage presence. But Edward Bloom doesn’t fit him well. He makes barely any effort (except when playing the dying Edward) to differentiate the young man from the old, and the enormous physical demands of the role prevent anything more than superficiality, so he becomes increasingly uninteresting as the show progresses. He’s the kind of actor, like Nathan Lane, who works so hard at what he does that, however enjoyable the result, the effort always shows. BIG FISH forces him to run on a performative treadmill at such high speed and on such a steep incline that the sweat pouring off him could fill a bathtub. He has so much to do, and at such a high intensity, that there’s simply no time to create an engagingly charming character.


While there’s no bathtub in this show, there’s a river flowing between the first row and the stage, and it’s here that we see the big fish of the title (which is also metaphoric—Edward being a big fish in a small pond), which makes so strong an impression in the movie. The river also contains a mermaid (Sarrah Strimel), who is one of the fabulous characters Edward tells of in his stories, like the giant named Karl (Ryan Andes, on stilts), and the circus owner cum werewolf, Amos Calloway (Brad Oscar). The river (barely visible from my otherwise excellent seats in the orchestra) is only one of the outstanding effects on display, with Julian Crouch’s set of moving barnlike slats combined with remarkable projections by Benjamin Pearcy that demonstrate the technological advances increasingly prevalent in theatrical settings. William Ivey Long’s costumes are fun in familiarly theatrical ways, and Donald Holder’s lighting is all that we've come to expect from high concept Broadway musicals. A number of special effects are notable, onebeing a dance performed by three realistically contrived elephants standing in their stables where only their rear ends can be seen. Another occurs during a scene in the woods when projections not only make the trees seem to move, but also cast fascinating images on the chorus’s woodland costumes.


But we don’t go to Broadway musicals only because they contain visual delights; we need to be touched by their stories, characters, and performances; we need to care, not about how the effects were created but about the people involved and how they feel. Kate Baldwin, as Sandra Bloom looking very much like a young Jessica Lange (who played the older Sandra in the movie), is stunning, and sings the pleasant ballad “I Don’t Need a Roof” with sweetness and emotion. The character, though, is standard issue “Mom.” Bobby Steggert as Will tends to overact, perhaps in an effort to cover up the blandness of his role (dully played in the movie by Billy Crudup). Will’s wife, Josephine, portrayed on screen by the wonderful French actress Marion Cotillard, has been cast with an African-American actress, Krystal Joy Brown, who doesn’t get to do anything of particular interest. As in the movie, which has Robert Guillaume, Edward’s doctor is played by a black actor, JC Montgomery. For a story set in small-town Alabama, the lack of any commentary on the interracial relationships among these folks seems a bit odd; am I too influenced by stereotypes of the Deep South?


Director-choreographer Susan Stroman delivers her usual show biz skills in making this fishy stewpot reasonably palatable, but even her superhuman efforts can’t prevent its bones from sticking in your throat. BIG FISH has size, certainly, but it’s also rather flavorless.
Posted by Samuel L. Leiter at 10:28 AM