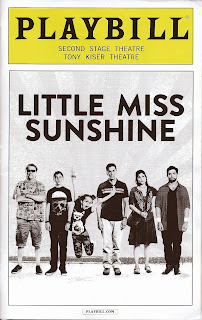 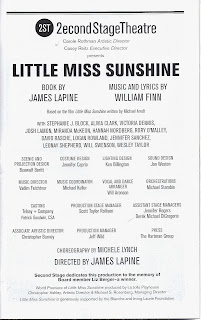 The decrepit old VW minivan that plays so prominent a role in LITTLE MISS SUNSHINE, Second Stage’s new musical version of the 2006 road movie comedy hit, is a perfect metaphor for this clunky jalopy of a show. Despite being the creation of the ultra-talented William Finn (music and lyrics) and James Lapine (book and direction), who collaborated on the hits FALSETTO and THE 25TH ANNUAL PUTNAM COUNTY SPELLING BEE, it put-put-putters along on its 800-mile journey from Albuquerque, New Mexico, to Redondo Beach, California, which is not easy to do when you’re practically out of gas from the get-go. The show, which originated at the La Jolla Playhouse in California, was sent to the theatrical garage for a thorough overhaul before traveling to the Big Apple; its sluggish two and half hours was stripped down to a zippier hour and 45 minutes, but even at that speed you’ll be asking, “Are we there yet?” 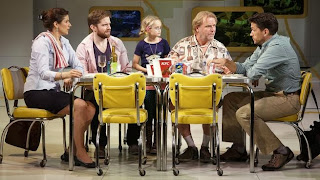 
The conventionally dysfunctional Hoover family, beautifully cast in the movie, includes Richard (Will Swenson), an unemployed dad who hopes to land a book contract; his long-suffering wife, Sheryl (Stephanie J. Block), who tries her best to hold her family weirdoes together; her brother, Frank (Rory O’Malley), a gay Proust scholar whose bandaged wrists reveal his recent attempt to off himself after his lover left him; Dwayne (Logan Rowland), an angry teenager who has refused to talk, preferring to have his nose buried in Nietzsche; Grandpa (David Rasche), a crusty buzzard into drugs and sex; and Olive (Hannah Nordberg), the adorable seven-year-old (Ms. Nordberg is nine) whose dream of entering the “Little Miss Sunshine” beauty pageant in Redondo Beach inspires the family to board their broken down minivan to get her there. No one in this troupe of usually reliable performers makes much of an impression; they’re actors, after all, not magicians.


Much of the movie occurs in the confined space of the minivan, which is helpful in creating a pressure cooker environment with so much quirkiness lumped together, but on stage we get instead seven yellow kitchen chairs on wheels. Under Mr. Lapine’s direction and Michele Lynch’s choreography (I’m assuming she was partly responsible), the chairs roll around in various, carefully controlled configurations, but the idea soon palls; even with Beowulf Boritt’s projections on several smalls screens at the rear, the sense of traveling through the American southwest, which formed so essential an ingredient in the film, is rarely present. Mr. Boritt’s set itself, when first seen, is actually quite impressive, being an off-white roadmap construction that winds from the stage floor proper up the rear wall and continues to snake on like a highway over the auditorium. An area up center is also capable of being used for smaller scenes, including a rest stop men’s room where two urinals fly in (did someone think this witty?) for a chance encounter between Frank and his recent ex, Josh (Wesley Taylor). 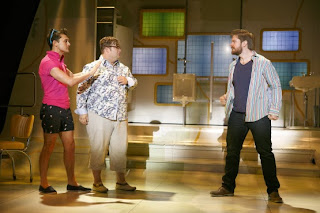 From left: Wesley Taylor, Josh Lamon, Rory O'Malley. Photo: Joan Marcus.
Serving as something of a deus ex navigator is a Siri-like voice that offers occasional commentary. This is not a bad idea, except it makes no sense when the vehicle the family is traveling in is so decrepit its clutch fails and everybody has to get out and push it to the top of a hill so it can roll downhill on its own volition. Would this family, financially strapped as it is, have gone out and gotten a navigation system for its clunker?


Because of the film’s visual realism and the believable performances of a stellar cast (Alan Arkin won an Academy Award as Grandpa and Abigail Breslin was nominated for one as Olive), it allowed us to accept (more than less) the oddball experiences the family has along the way. On stage, however, nothing seems real, everything seems forced and overdone, and the story’s most outrageous device comes off as ridiculous. I’m referring to the decision of the family, after Grandpa dies en route, to steal his corpse and take it along with them in the van because there’s no time for the formalities involved in dealing with his death. Seeing that corpse, sealed in its white bag, sitting on one of those rolling kitchen chairs as the van moves relentlessly toward its goal, needs a far greater willingness to suspend one’s disbelief than I was capable of providing.


LITTLE MISS SUNSHINE reaches its apogee in the children’s kiddy pageant, with young girls dolled up in makeup and costume to look far sexier than they should (remember Jon Benet Ramsey?); in fact, we’ve already gotten used to seeing the girls because they pop up (literally) at several junctions as a chorus of prepubescent mean girls to poke fun at the less glamorous Olive’s pretensions. But even this scene is an uphill climb, and the gears never properly mesh. The highlight, of course, is Olive’s big number, a raucous bump and grind routine taught her by her irresponsible Grandpa that no one else in the family appears ever to have seen. Maybe if I went back and saw it again in the movie, I’d find it similarly inane; if you find the kiddy beauty pageant distasteful for its exploitation of children’s sexuality, Olive’s routine may make you squirm. (And is it really necessary to get a cheap laugh by having her react, earlier in the show, to a crisis by saying: "We're fucked"?) 
Of course, the dysfunctional family becomes functional again by the time the show ends, but I’m afraid I can’t say the same for the show. Back to the garage?
Posted by Samuel L. Leiter at 6:44 PM