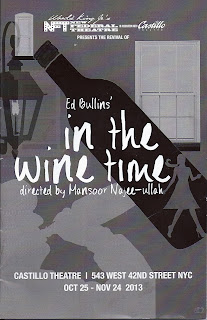 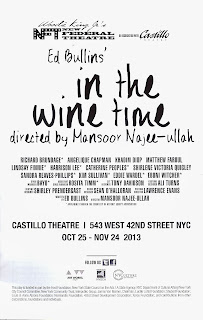 Ed Bullins was once one of the leading black playwrights in America, a writer who came into his own during the days of the black power movement of the 1960s. He wrote a number of provocative plays, among them IN THE WINE TIME. This apparently semiautobiographical 1968 drama, set in a slum neighborhood of a large northeastern industrial city (Bullins is from Philadelphia), takes place on a hot summer night in 1952 when the mainly black residents of Derby Street are hanging outside on stoops and sidewalks, seeking respite from the sweltering heat. It has some stylized elements but is essentially a slice of life drama, spilling over with profanity (and the N-word), sexuality, anger, drinking, jealousy, and marital angst, but, while Bullins had served briefly as Minister of Culture for the Black Panthers, it’s not especially political or racially divisive. The offstage voices of two members of the white Krump family have been cut, and the only whites seen are the drunken Mr. Krump (Richard Brundage) in a brief, wordless appearance, and the local beat cop (Mr. Brundage again).


Something of a coming of age drama, IN THE WINE TIME centers on the relationship of the rage-filled, womanizing, unemployed Cliff (Kim Sullivan); his long-suffering wife, Lou (Shirlene Victoria Quigley), whom he abuses; and their teenage nephew, Ray (Khadim Diop), whom Cliff and Lou look after. Ray’s late mother was Lou’s sister. Cliff, a former troublemaking sailor who spent much of his service time in the brig, is loud and crude; he finds in young Ray someone he tries to mold into the man he himself would like to be. But, despite being described as someone going to school to improve his lot, Cliff comes off as a lout who’d like to see Ray get into the navy so he can enjoy the sexual favors of women all over the world. Lou clashes constantly with Cliff over how to handle Ray, while Ray, especially as played by Mr. Diop, is a neutral, pliable figure, playing with his yo yo and downing glass after glass of wine with his aunt and uncle. The play’s title is intended to have poetic resonances as a time of day when people can relax and release their inhibitions, but in this production seems simply an excuse for people to get drunk, holler, or exercise their libidos.


There are a number of supporting characters, most with little more than fornication and cheap wine on their minds; those supposed to be teenagers look like they’re in their mid to late 20s and act like they’ve been around the sexual block more times than they can count. The character of Silly Willy Clark, described in the script as a large man in his thirties, wearing a wide-brimmed hat, is played by Harrison Lee as a skinny, grizzled wino in a porkpie hat on the verge of the DTs, which makes little sense in the context. In an effort perhaps intended to suggest how the wine brings out the characters' animal natures, director Mansoor Najee-ullah has Cliff and Lou roar at each like wild beasts; later, others do so at well. It's a choice the show could well do without. At the end, simmering tensions (in this production, more in the text than on the stage) erupt in an act of violence whose melodramatic outcome is meant somehow to redeem Cliff, but the last 15 minutes or so of the play have been so clumsily staged and acted that it’s impossible to accept anything on view as credible. There are good actors in this production but they’ve all been left out to dry.


Neither the direction, set, lighting, costumes, nor incidental music (including an overextended gospel version of “America the Beautiful” that precedes the performance) do anything to help lift this revival above the commonplace. Even the venue, in the basement of the Castillo Theatre, conspires against the show, with the auditorium lacking any rake whatsoever; I had to bob and weave to see the show around the ears of the head in front of me. Whatever values Mr. Bullins’s play may still have, 45 years after it premiered, are bungled by this ham-fisted and unattractive production.