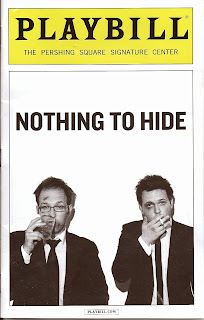 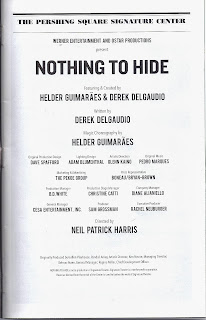 So you don’t believe in magic? Maybe your mind might be changed (or even blown) if you pay a visit to NOTHING TO HIDE, an astonishing display of playing card prestidigitation running at the Signature Theatre and directed by the ubiquitous Neil Patrick Harris. It arrives here after a successful run at the Geffen Theatre in Los Angeles. The show stars two average-looking young guys in suits, a moon-faced American named Derek DelGaudio, who also wrote the often hilarious chatter, and Helder Guimarães, an unassuming, bespectacled Portuguese chap who vaguely reminds one of Teller, the silent partner in the great Penn and Teller act. In a little more than an hour, these fellows do a series of truly astonishing tricks that will have you scratching your head for days and trying to describe to others what proved so discombobulating. 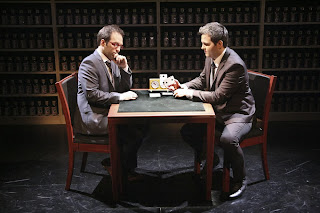 The stage consists of a simple green card table with two chairs placed on a highly polished black floor. The upstage wall is completely covered with a bookcase on which sit well over 700 identical bottles. In each is a deck of cards, inserted in much the same painstaking manner as a ship is inserted into a bottle. This will be explained in one of the remarkable routines these deadpan comedian-illusionists perform, when an audience member is randomly chosen and asked to select a bottle. How do I know her choice was random? Because to find her, a stuffed monkey was tossed in the air backwards over the head of the thrower and, when a spectator caught it, it was tossed by him backwards again, so that the person catching it some rows to the rear couldn't have been a plant. The lady was told to imagine that the routine was a dream and asked to call someone she knows well the next day. She agreed to do so, saying it would be her dad, named Joe, and she promised, as instructed, to tell him of the dream she had. To cut to the chase, after declaring a card by number and suit, she was asked to pick any bottle on the shelves. The bottle was duly retrieved, placed in a plastic bag, and smashed open with a hammer. The cards were removed and fanned open, with one card facing in the opposite direction from the others. That opposing card, of course, was the one she had announced. Moreover, when it was turned around it had a name on its back. Do I need to tell you the name?
Helder Guimarães and Derek DelGaudio. Photo: Michael Lamont.


Or how about when Mr. DelGaudio stood there looking down as Mr. Guimarães raced through the audience, randomly distributing cards to various spectators, perhaps 15 or more. These cards, of course, had been shuffled and reshuffled before our eyes. (I received one and my son, Justin, another.) Card holders were then instructed to shout out their cards on the count of three. On the count, then, there was a single loud shout identifying all the cards, after which Mr. DelGaudio looked up and proceeded to point to each card holder and identify the card he or she had shouted in that single blast of sound.


Card magic may not be as visually spectacular as making tigers disappear or sawing people in half, but it’s magic nonetheless. If you’re in the mood for a wonderfully engaging hour of it, performed by two offbeat card sharks with wit (some of it using naughty words at the hapless audience's expense) and charm, NOTHING TO HIDE will do the trick.
Posted by Samuel L. Leiter at 8:39 PM