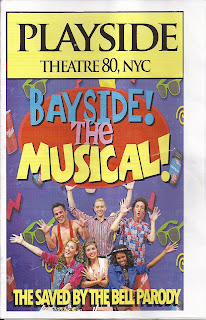 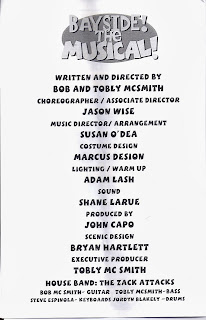 Full disclosure:  I never watched a single episode of the Saturday morning kids' TV series “Saved by the Bell” (1989-1993), which seems to have been popular enough to have inspired this lively parody, BAYSIDE! THE MUSICAL!, playing on St. Marks Place at the venerable Theatre 80. Two of the TV show’s young actors who eventually went on to some degree of later fame are Elizabeth Berkley and Mario Lopez. “Saved by the Bell” was a comedy show about a small cadre of colorful students, their principal, and the kinds of conventional problems, comically exaggerated, that teenagers face, with the occasional inclusion of serious social issues. My granddaughter, Briar, had occasionally watched the TV series, so she went along as my guide, even going so far as to view the entire series again in preparation for seeing it spoofed. 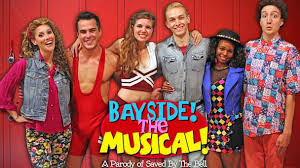 The show’s program also pokes fun at the show, with faux ads, including one for the Max, the students’ hangout restaurant (there’s an offer of a free burger and fries that expires 5/22/93), and hilarious  actor bios.  Despite my not picking up on all this printed humor, I couldn’t help chuckling at some of it. They could have called it BAYSIDE! THE PROGRAM! although the playbill’s actual name, PLAYSIDE, is probably good enough.


Watching a parody of a beloved show as part of an audience laughing uproariously at every in-joke reminded me of going to see Yiddish theatre with my mother when I was a kid. Enough was spoken in English so I could follow the plot and even laugh now and then, but when the biggest punch lines came, they were always in Yiddish, and I had to ask my mother for a translation. Similarly, I didn’t get a lot of the references in BAYSIDE!, but Briar was there to fill me in. For the first act, at any rate. For some reason, the producers decided to expand what originally had been done Off-Off Broadway as an 80-minute show into one running nearly two hours; despite a lot of additional laughs, it eventually grows heavy-handed, like an SNL skit that starts off brilliantly but overstays its welcome. Once the parody has made its point, there’s no need to keep hammering at it.


Fans of the TV show, even semi-fans, like Briar, will have a great time seeing their favorite characters taken to extremes, with actors who, in some cases, are very reminiscent of the ones they’re making fun of. The audience is actually encouraged to whoop with enthusiasm for the upbeat moments and moan for the sad parts. This, too, is in the spirit of “Saved by the Bell,” where (if you check it out on YouTube) the audience screams noisily at each plot turn.


The entire ensemble offers marvelously spirited burlesques of the originals. Any hint of some personal characteristic that can be exploited for yucks is fair game to writer-directors, Bob and Tobly McSmith; thus Slater (John Duff), the class jock played on TV by Mario Lopez, who dresses most of the time in a spandex wrestling uniform, turns out to be gay, which the show milks for all its worth.


Jessie, the role created by Elizabeth Berkley (of later SHOWGIRLS notoriety), is shown as a caffeine-addict with a gigantic pill-popping jones. The side-splitting comedienne who plays Jessie is April Kidwell, a dead ringer for Ms. Berkley; in a cast of highly proficient clowns, she has the comedy chops that make her the show’s real highlight. It’s rare to see such an attractive comedienne go as overboard for laughs as the uninhibited Ms. Kidwell; at one point, she does an interpretive dance that, while it goes on too long, had me in stitches. Whenever she’s on stage, she lights up the theatre, and, like everyone else in the show, her commitment to the nonstop nuttiness never lets up for a second. (Ms. Kidwell also starred in the company's recent movie parody, SHOWGIRLS! THE MUSICAL!, where she also played the Elizabeth Berkley role.)


According to Briar, everyone in the cast is a decent, if cartoonish replication of the characters they’re playing (except for one I’ll keep to myself). When I afterward checked out moments from the TV series for myself I realized everyone on it was already a cartoon; BAYSIDE! is essentially a cartoon of a cartoon.


There's no need to go over the plot details, which are based on multiple ways the students come up with to raise $500 to save the Max from closing down; each new effort involves musical numbers that cash in on the comic possibilities the various schemes suggest. The language is often rough and raunchy, sexual references and behavior abound, the singing and dancing (choreography by Jason Wise) are bright and brassy, Bryan Hartlett’s set is cheap and cheesy, and Marcus Desion’s costumes capture that 90's sitcom look.


You don’t have to have been a fan of the TV show to enjoy BAYSIDE! THE MUSICAL!, but, judging from Briar’s reaction, it certainly will help.
Posted by Samuel L. Leiter at 2:34 PM