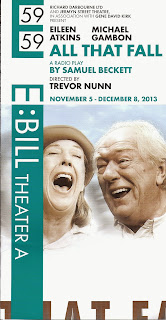 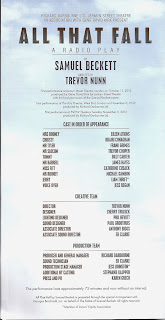 Perhaps no other playwright was as obsessive about protecting his vision of how his plays should be produced than Samuel Beckett. So protective of his work did he become that he found himself spending much of his time supervising other directors staging his plays, and eventually becoming their director himself. He would drill actors over and over to get the right nuances, and he once reduced Billie Whitelaw, the English actress he considered his favorite interpreter, to hysterical tears when she had trouble giving him what he wanted. “My God, Billie, what have I done to you? . . . my God, Billie, what have I done to you?” he said as he stroked her hand. When she had recovered a few minutes later, his attitude changed to all business. “Are you better now? Do you think we can get on with rehearsal?”


Still, directors continued to approach his eccentric plays with eccentric interpretations, and, when it became too time-consuming, he gradually reduced his complaining and lawsuits and simply simmered. I say all this in response to Trevor Nunn’s current staging of ALL THAT FALL, a one-hour radio play Beckett wrote in 1956 for the BBC (which produced it in January 1957);  he insisted it must be done precisely as a radio play, that is, with all the necessary sound effects but with the actors simply standing and reading their lines in front of microphones. When you listen to a radio play you must see the play in your mind, and he was not especially in favor of having his radio plays staged in theatres, even though, given his name and reputation, this has been done many times.


Nunn’s production, originally given at the Jermyn Street Theatre in London in 2012, and then moved to the West End’s Arts Theatre, conforms only to the spirit, and not the letter, of Beckett’s requirement, in that the actors hold their scripts and pretend to be reading from them. They are certainly in a space that could pass as a radio studio, it being merely a black-walled room with six chairs at either side, and with a number of microphones hung from wires over the central area. When the broadcast is in progress, a red light over one of the two upstage doorways goes on, and when the play ends, it goes off. But upstage is a prop resembling part of a small automobile, with two seats and a working door on its downstage side. A major chunk of the stage business revolves around the outspoken character of the overweight (in the script) Mrs. Maddy Rooney (the trim Eileen Atkins in the role created by Ms. Whitelaw) getting into and out of this cramped vehicle. Mr. Nunn has staged it very humorously and Ms. Atkins and her fellow actors play it exactly right, but it is a denial of the author’s intentions, and I really would have liked to see how the actors could have created the same comical sense of Mrs. Rooney’s physical discomfort without having it done quite so literally.


Mr. Nunn has chosen to physically embody not only the car scene, but, to a degree, the play itself, although not with props. He hasn’t brought a hinny (a cross between a horse and a mule) and cart on for the scene when a dung carter (“dung” is mentioned repeatedly) named Christy (Ruairi Conaghan) encounters Mrs. Rooney as she walks down a country road to the train station to surprise her husband, Mr. Rooney (Michael Gambon), on his birthday by picking him up when he arrives. The actors behave as if there’s a stubborn hinny and cart present, and there’s quite a lot of other physical behavior and blocking as Mrs. Rooney proceeds on her journey. When a man on a bicycle appears, he mimes riding it. Moreover, the actors wear costumes that convey their characters, whereas a recreation of a 1956-style radio broadcast would surely have had the men in suits and ties and the women in whatever the actresses involved chose to wear, even if a small studio audience happened to be present. No “designer” (in this case, Cheri Truluck) would have been involved.


ALL THAT FALL is not as opaque as Beckett’s great stage plays, like WAITING FOR GODOT or ENDGAME, accessible as they usually are, but is essentially a genre piece about colorful Irish characters, with its central roles, played by MS. Atkins and Mr. Gambon, two truly top-tier British stars. It is rather autobiographical, and its writing is said to have caused Beckett, who often struggled with depression, to suffer greatly once he’d finished it. The play is overlaid with a patina of pathos, and touches on aging, death, godlessness, and decrepitude, but in a gently satiric way that conveys Beckett’s usual themes about the anguish of existence, but that also captures the atmosphere of provincial Irish life, down to the characters’ brogues. Literary scholars have uncovered dozens of symbolic and personal references, but no audience could be expected to recognize them without serious study. The essential plot is that Mrs. Rooney walks to the station, meets her husband, and walks home with him as the weather turns foul. She continually encounters metaphorical bumps in the road, which are overcome, as they must be if she is to continue to go on. Still, because of its deceptive simplicity and lack of significant conflict, many audience members are likely to utter responses like the one I heard an elderly gentleman say to his wife in the street outside: “What the hell did you think of it?”


True to the radio concept, sound effects, created by Paul Groothius, play a major role in evoking the rural atmosphere. The sounds of animals clucking, crowing, and whatever are distinct, as are the footsteps on the gravelly road, the train’s sounds, and such incidental things as Mahler’s “Death and the Maiden,” heard from a nearby house as Mrs. Rooney walks along.


Regardless of my purist’s reaction to the way in which the production ignores Beckett’s wishes (I’m sure the Beckett estate, even if not completely satisfied, approved it), ALLTHAT FALL is clearly of serious interest. The British and Irish actors assembled to support the leads all bring authenticity and insight to their characterizations, and Mr. Gambon and Ms. Atkins don’t disappoint in revealing their rich ability to embody Beckett’s eccentric characters with humor, sorrow, and intelligence. Mr. Gambon's role is not as long as Ms. Atkins's and hers is the dominant performance, but it is still something to see how, with his deep voice and massive presence, he completely commands the stage, even in the role of a doddering old man. Some of his moments with Ms. Atkins as they face the bleakness before them are deeply touching.

ALL THAT FALL is one of several Beckett programs being offered this season. Broadway's WAITING FOR GODOT, of course, with Patrick Stewart and Ian McKellen, is the piece de resistance, while A MIND-BENDING EVENING OF BECKETT at the Irish Rep offers something of a Beckett sampler. The main reason for seeing ALL THAT FALL is for the rare opportunity to see two great English actors working together; I'd have rather seen them in something more theatrically substantial, but seeing them at all is still something to be relished.
Posted by Samuel L. Leiter at 7:12 AM