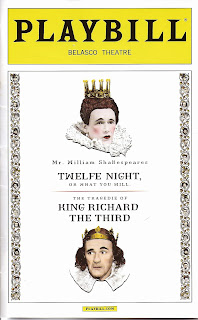 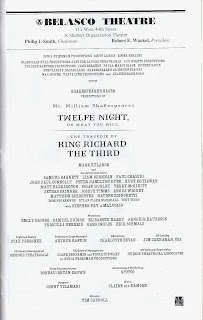 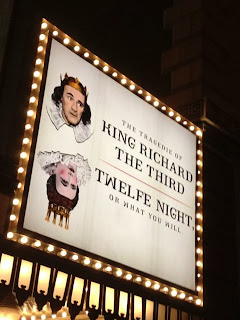 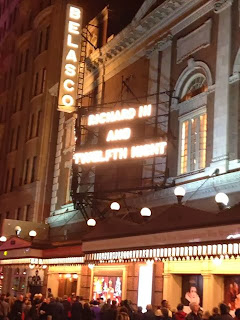 The Shakespeare-heavy 2013-2014 season, which has presented ten Shakespeare (or Shakespeare-based) plays and musicals thus far, has mostly been a disappointment. I don’t get to see A MIDSUMMER NIGHT’S DREAM or MACBETH until early December, so I’ll put them aside for the moment and thank the heavens for the arrival on these shores of London’s Shakespeare’s Globe productions of TWELFTH NIGHT and RICHARD III, starring the inimitable Mark Rylance. These plays are running in repertory at Broadway’s Belasco Theatre and, while I’m not as over the moon about them as many commentators have been, they are eminently successful at what they seek to do and are must-see experiences for serious bardolaters. 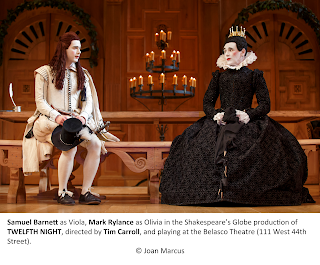 Both plays are performed on a stage, designed by Jennifer Tiramani, that replicates the appearance of a medieval hall at Oxford University and that resembles the permanent set at London’s Globe Theatre, where these revivals were first presented. A small number of audience members are seated in a two-tiered arrangement at either side of the stage, so some sense of the Globe staging is preserved. As is well known, the Globe’s productions seek to recapture as much of the authentic feel of how Shakespeare would have been performed in his own day. Musical instruments and costumes (also by Jennifer Tiramani) are as authentic as possible. It’s impossible to know precisely how the plays were acted, of course, so, even if what we’re watching gives us only a general impression that we’re on the South Bank of the Thames in the early 1600s, the performances are unquestionably the product of 21st-century actors bringing their own sensibilities to bear on characterizations, timing, humor, and even pronunciation. 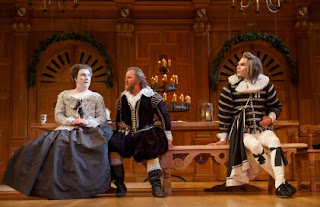 From left: Paul Chahidi, Colin Hurley, Angus Wright. Photo: Joan Marcus.
Even having all the roles played by men, as was the case in Shakespeare’s day, can’t repeat the experience of the original, which mainly used boys, not mature men, to play the female roles. Still, seeing talented male actors, their facial features partially disguised by the use of white makeup with touches of rouge, is instructive. While some vocal modification is employed, the actors don’t go so far in altering the way they sound as do the onnagata or female-role specialists in Japan’s kabuki theatre, or other Asian forms where men regularly play women’s roles. While a few actors, like Samuel Barnett, play women in both plays, most of the actors playing women in one play perform male roles in the other. Joseph Timms, though, plays both Lady Anne and Grey, a male role, in RICHARD III. 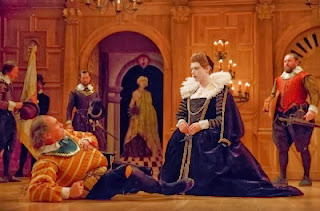 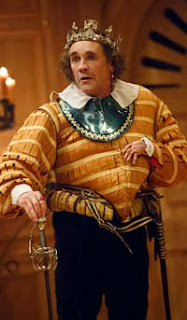 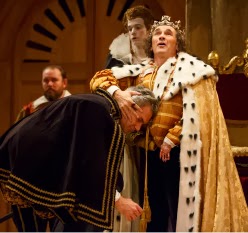 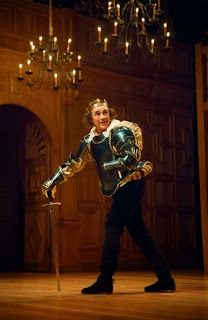 
Mr. Barnett’s Viola is an exceptional piece of work, never falling into camp; he's completely believable when, disguised as the page Cesario, he's able to suggest both the boy he's impersonating and the girl he actually is. (The casting of Joseph Timms as his twin, Sebastian, is a stroke of genius because of the actors’ striking resemblance when wearing similar costumes and makeup.)  Whether Mr. Rylance is, indeed, the greatest classical actor in the English-speaking theatre is, of course, debatable, but he has an always intriguing, inventive, and wonderfully watchable stage presence. His highly-touted Olivia is so eye-catching in the comical way he looks, behaves, and moves that TWELFTH NIGHT essentially makes Olivia the leading, not a supporting, character. I can think of no better adjective for his interpretation than “cute,” but it is a cuteness for the ages and one I won’t soon forget. Mr. Chahidi’s Maria is a full-bodied, buxom, middle-aged woman, mischievous and clever; the presence of the male actor within the woman’s guise serves well at making even crueler the treatment Maria, Sir Toby (Colin Hurley), and Fabian (Jethro Skinner) impose on Malvolio (Stephen Fry). I don't recall a production in which Maria stood out as strongly as she does here.


Mr. Fry’s Malvolio, by the way, is never so outrageously pompous and arrogant as to deserve the mistreatment he's accorded by the trio of mischief makers who abuse him, thereby increasing the sympathy he receives. I suspect Shakespeare would have preferred the audience to agree more with his comeuppance than his vindication.


The other chief performance of the repertory is Mr. Rylance’s RICHARD III, a role in which he gleefully relishes his own machinations and wickedness, laughing bizarrely and shifting suddenly in tone to malevolence and back again; he does this with such clownish glee that many have found his interpretation at odds with Shakespeare’s intentions. Valid as this criticism may be, I found his performance, like that of his equally questionable Olivia, always riveting; his Richard is the kind of a frighteningly friendly sociopath who could as easily charm you into his arms (as he does the woman whose husband and father he's murdered) as gobble you up in one bite.


Under Tim Carroll’s superb direction, both plays move like the wind, with actors entering from or exiting into the two, large upstage doors as one scene succeeds another, and with many entrances and exits using short flights of stairs at down left and right leading to the auditorium. The exquisite costumes, constructed according to early 17th-century methods, make the stage seem a page out of history. Six chandeliers using actual wax candles are overhead, assisted only subtly by electric lighting, and the lights remain on dimly in the auditorium throughout. A fully costumed orchestra playing rauschpfeifes, sackbuts, shawms, recorders, lute, thoerbo, hurdy gurdy, pipe, and tabor is visible above the rear façade, playing authentic music, and further enhancing the sense of what being at a Shakespeare play was like 400 years ago.


Although it is far from what an Elizabethan audience would have witnessed, the company appears on stage at half hour to put on their costumes and makeup as the audience watches. Standing on stage with them are modern theatre workers in shirts and ties, headsets, and the like, while similarly contemporary assistants wearing black dress the actors and help with wigs and makeup. This touch reminds us that, while our step back in time is only partial, it’s impossible to recapture with total accuracy a time so distant. We must combine our historical knowledge with creative imagination. The opening sequence is a half-step into the past. Even when the play begins, we and the actors must continue to supply the rest.
Posted by Samuel L. Leiter at 12:18 PM