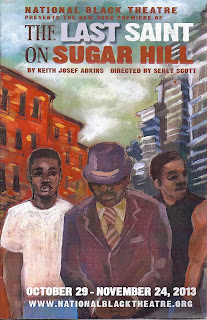 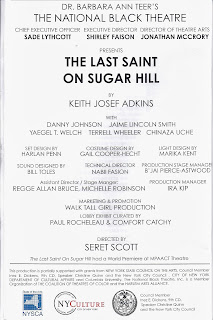 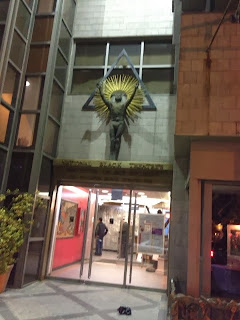 Dr. Barbara Ann Teer’s National Black Theatre, housed in a handsome building on Fifth Avenue between 125th and 126th Streets in Harlem, is celebrating its 45th year, a record deserving of considerable appreciation. Their performance space, located on the third floor, provides a spacious lobby where there is currently an exhibit of Paul Rocheleau’s lovely photos of the neighborhood, “Harlem: Lost and Found,” taken from a book (text by Michael Henry Adames) of that name. The play on view is Keith Josef Adkins’s THE LAST SAINT ON SUGAR HILL, as Harlem-oriented a work as you could wish for, but which had its world premiere in Chicago. The many references to local places and attitudes give the play and performance a resonance that makes this a perfect venue for it.


A central issue is gentrification, the conversion, in this case, of a working-class black neighborhood into expensive housing for well-heeled residents, mainly white, and the consequent damage to Harlem's cultural and ethnic sensibilities this entails,. Napoleon (Danny Johnson) is a middle-aged Harlem landlord who has been offered $10 million by a developer interested in purchasing an old building he owns; part of its value comes from Billie Holiday and Billy Strayhorn having lived there. The offer is six times the value of the property and Napoleon is obsessively determined to close the deal, but there’s someone standing in his way, a tenant who must be evicted, even though he has lived there for years and has close ties to Napoleon’s family. He also, it turns out, has legal standing to remain; when he refuses to move, Napoleon has no qualms about using violence, even ordering the more pliable of his two sons, Z (Terrell Wheeler), to murder the squatter.


While Z is a party boy, preoccupied with women and having a good time, the other son, the bookish Dexter (Jaime Lincoln Smith), who briefly studied medicine in college, is struggling to do good for the community. He runs a sub rosa, middle-of-the-night clinic for the homeless in the basement of the building his father wants to sell. He’s helped by Joseph (Yaegel T. Welch), a friend from Africa in his third year of residency, who encourages Dexter to seek a grant that will allow the clinic to go legit. But Dexter is in the grip of his ruthless father’s power, making it hard to fulfill his personal aspirations. Complicating things is a family secret about a shooting that took place when Dexter was only five. The presence of a homeless man (Chinaza Uche) with whom Dexter starts up a relationship brings to light the truth about what actually happened in that incident.


The wide but shallow stage area has been filled by designer Harlan Penn with a small room at stage right for the basement clinic, while the remainder of the setting shows an exterior door to Napoleon’s house at right center, and its living room interior occupying most of the remaining space. It’s a relatively naturalistic environment that also allows for street scenes to be played downstage. The lighting, by Marika Kent, and costumes, by Gail Cooper-Hecht, are functional, while Bill Toles’s sound design provides both musical standards (like “Take the A Train”) and effective suspense-generating instrumentals.


THE LAST SAINT ON SUGAR HILL works mainly because of the strong performances of its all-male cast under Seret Scott’s capable direction, but the play strains for credibility. Napoleon, given a dynamic portrayal by Mr. Johnson, is a two-dimensional, profanity-spewing monster; barely a sentence goes by without him saying “nigger” this and “nigger” that. (The audience laughed at this language and, for some reason, even at some dramatic scenes.) His name alone is enough to indicate the playwright's purposes, although Napoleon prefers to think of himself as a latter-day Toussaint Louverture. Dexter, well acted by Jaime Lincoln Smith, seems too smart to be in such thrall to his father’s megalomania and brutality. The homeless man is a too-obvious mechanical device and not a person, and only contributes to making the action seem formulaic. And it's not clear why it takes so long before anyone suggests that offering the squatter some form of monetary compensation might be a better idea than murdering him.


Mr. Adkins’s dialogue is rich in black street talk and wisecracks and his plot setups provide conflict and action, but there always remains the feeling that we’re watching an artificial construction. Still, this two-act melodrama, which runs about two hours, has several gripping scenes and it lands some telling blows about the dangers of gentrifying a place like Harlem. It also argues well for the importance of community activism. The National Black Theatre is an exemplar of such activism: may it continue for at least another 45 years.