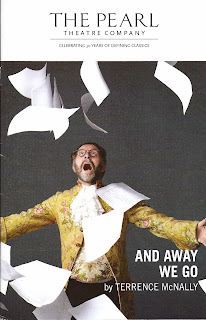 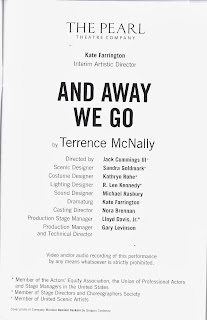 The first thing that came to mind when I saw announcements printing the title of AND AWAY WE GO was that it had something to do with Jackie Gleason. This was the signature phrase of the great, overweight comedian who said it as he lifted one leg, swung it across his other, and, palms facing down, swooped off sideways to wherever he was headed. But Gleason is nowhere in sight in what is, instead, Terrence McNally’s unusual new play at the Pearl Theatre about the trials, travails, tribulations, and triumphs of theatre people (Western theatre people, that is), from the Greeks to today. 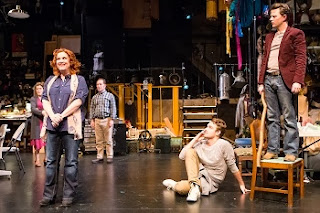 From left: Carol Schultz, Donna Lynne Champlin, Dominic Cuskern, Micah Stock, Sean McNall. Photo: Al Foote III.
The Pearl’s wide stage has been strikingly converted by set designer Sandra Goldmark to the impressive semblance of a universal prop and costume room, replete with work stations and shelving. Everywhere hang lamps of all sizes, colors, and dimensions, while props, costumed dummies, masks, weapons, and every other sort of theatrical odds and ends fill the shelves, hang from the ceiling, and line the walls in orderly confusion. Regardless of its anachronistic accoutrements, and the use of electric lighting, this cluttered yet appealing space is to be home to a conglomeration of moments set backstage in multiple theatrical periods: Athens, 458 B.C., at the Theatre of Dionysus; London, 1610, at the Globe Theatre; Versailles, 1789, at the Royal Theatre; Moscow, 1896 [sic], at the Moscow Art Theatre; Coconut Grove, Florida, 1956, at the Coconut Grove Playhouse; and an unnamed resident theatre company (perhaps the Pearl?), the present.


The dates listed here are from the script, so it must be noted that the Moscow Art Theatre did not exist in 1896, but was created in 1898. However, the dates have some significance; the first is when Aeschylus’ THE ORESTEIA premiered; the second is during a rehearsal of Shakespeare’s THE TEMPEST (which opened in1611, not 1610); the third during the performance of an unnamed new French play; the fourth during the first Moscow Art Theatre reading of Chekhov’s THE SEAGULL; the fifth during a performance of the American premiere  of Samuel Beckett’s WAITING FOR GODOT, starring Bert Lahr; and the last as a contemporary company is preparing to cancel its upcoming season because of a financial shortfall.


There are six actors in the play and they each play one of the six characters Mr. McNally has created for each period. Thus each actor--Rachel Botchan, Donna Lynne Champlin, Dominic Cuskern, Sean McNall, Carol Schultz, and Micah Stock, all current members of the Pearl's resident company--plays six roles and there are 36 roles in all. The play actually begins with each actor kissing the stage floor, announcing their name, how long they've been acting, their favorite role, their least favorite, and one thing the audience should know about them. Technically, AND AWAY WE GO is a tour de force of playwriting ingenuity, one that calls for tour de force performances from each actor. Although certain characters tend to dominate some scenes, there are no leading roles, and the result exemplifies the meaning of ensemble. I have reservations about both the play and the acting, but it’s impossible not to appreciate the ambition, cleverness, and effort represented here.


The action begins in Greece and, as it moves forward in time, it also moves backward, and characters from one period often pop up in others. The overall effect is of the continuity of concerns among members of the theatre community. Anachronisms course freely through the dialogue, which is mostly in a contemporary colloquial mode. Occasionally there are political references, such as the French Revolution brewing in the background of the Versailles material, to suggest the relationship between theatre and society. Cannons keep going off, even in ancient Greece; perhaps these sounds are symbolic of the Elizabethan practice of announcing a play’s beginning with a cannon explosion and of the Globe Theatre’s having once been burned down as a result; some sort of danger, even in the form of monetary shortages, is always threatening to end the life of the fabulous invalid.


The play is a stewpot of theatrical references and in-jokes, and I often wondered how much was being absorbed by the audience at the Pearl. Theatre buffs will appreciate much of it, although they’ll wince if they spot bloopers (such as the reference to SHE STOOPS TO CONQUER as Restoration comedy), but too many references are bound to fly over all that silver hair. Even the story of WAITING FOR GODOT’S Florida debacle will likely pass by many theatergoers.


The nonstop mingling of personnel from different periods and the shifting back and forth in time eventually becomes confusing and dull, since none of the characters is given more than a quick outline and the actors are switching from role to role with only minimal physical alterations. A few characters, like Richard Burbage and Mildred Lahr (Bert’s wife), are based on actual people, but most are fictional, not that this matters as all are too thinly drawn to make any distinctions among the real and the actual. While I appreciated being immersed in the world of theatre past, and its associations with theatre present, too much struck me as artificial, and the humor never rose above the level of an ingenious but overextended college sketch. The nature of the writing makes it impossible for the players to give any but the most superficial performances, and, while the company plays with brio and enthusiasm, a great deal of the acting set in earlier periods is overly broad and self-consciously theatrical.


To his credit, director Jack Cummings III paces the play briskly, although this still doesn't prevent the intermissionless hour and 50 minutes eventually becoming a strain. Without a cohesive plot, and what seems like an endless stream of backstage remarks about playwriting, acting, directors, theatre business, agents, censorship, rehearsals, remembering lines, unions, understudies, masks, critics, men playing women, etc., one’s interest wanes and the well runs dry. When the words “And away we go” were spoken shortly before the play ended, I was glad to take them at their face value.
Posted by Samuel L. Leiter at 7:58 PM