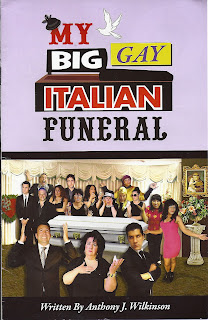 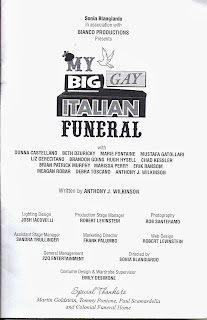 Never having seen Anthony J. Wilkinson’s MY BIG GAY ITALIAN WEDDING, which has been around in one manifestation or another since 2003, and is enjoying a current Off Broadway long run of one day a week at St. Luke’s Theatre, I can only say that—Mama mia!—I hope and pray to St. Anthony that his namesake’s earlier play is better written, acted, and directed than its follow-up, MY BIG GAY ITALIAN FUNERAL. This latest effort, also at St. Luke’s for a one-day a week run, stars its author, as does WEDDING, and is misdirected by Sonia Blangiardo in what can only be described as a demonstration of how to whack a play (thankfully, though, no one in the play seems connected).
Given that Mr. Wilkinson’s script is so filled with offensively stereotypical ethnic characters, Italian American, Jewish, and Chinese, it certainly doesn't need to have these cartoons played with such amateurish exaggeration. Take the people on "Jersey Shore," mix them with a dash of "The Sopranos," and then make everyone 10 times more annoying. A very large cast of actors, 16 in all--in some of whom there now and then sparkles the promise of something better--cavorts loudly and broadly in an inane farce about a Staten Island family’s behavior at the funeral of their departed patriarch. None of them, however, has the special ability to play such outrageous people with the fundamental reality that must underlie the silliness. When only the silliness is performed, all you get is silliness, not humor.
The family has two gay sons, Anthony and Peter Pinnunziato (Brian Patrick Murphy); as if that’s not enough for a family of Italian-American Catholics, there's also a pregnant daughter, the big-haired, gum-chewing Maria (Marissa Perry), whose fiancé is Rabbi Howie Horowitz (Chad Kessler). The good rabbi is mostly clueless--drafted to say something when the family priest is unavailable, he begins to say Kaddish in Hebrew--but he emerges as the play’s conscience when he makes an incongruous plea for tolerance. The inter-religious love story between the rabbi and the cuginette creates near chaos among some members of the extended family, but the central conflict is about the broken friendship between the brothers because,15 years earlier, at a Bay Ridge gay bar, Peter stole Anthony’s boyfriend, Dominick Vitale (Mustafa Gatollari), from him.


Aside from the flashback to the gay bar scene, with its exaggeratedly ridiculous drag show, the action takes place in the funeral parlor, with the casket down center. The big question is: will Anthony forgive Peter and let bygones be bygones? By the time this is answered at the end of the two-hour, one-intermission, show, you’re likely not to care one whit, so removed from reality are the writing and performances. Ms. Blangiardo’s physical staging is the most awkward and sloppy I’ve seen all season. With the stage crowded with actors, everyone stands in a line from one side to the other; those who can’t fit in have to find an opening to break through to speak their lines.


Nothing works in this bundle of clichés, but I can’t deny that some theatergoers did find it funny. An example of what drew a big laugh when I attended was one character’s saying that with a family member marrying a Jew they could now celebrate Christmas and Chanukah. The laugh came not from that premise, but from the pronunciation of Chanukah with a soft "ch" as in Chattanooga, and with the word itself almost rhyming with palooka. If this is what strikes people as funny, I may never laugh again. This was an audience, I might add, in which the woman in front of me not only gave me a dirty look when I tapped her to turn off her phone, but kept checking her e-mails regardless. I guess I can forgive her, since anything would have been more interesting than this undertaking (pun intended). Like the stiff in the casket, MY BIG GAY ITALIAN FUNERAL is dead on arrival.
Posted by Samuel L. Leiter at 9:50 AM